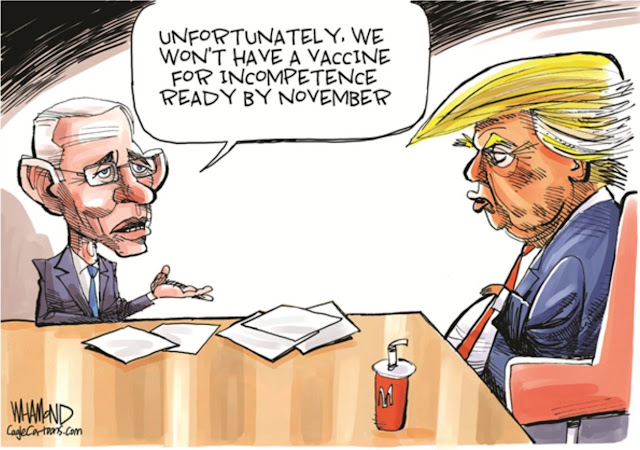 The "Trump Was Warned About The Coronavirus In November 2019. Six Months Later, He Still Has Absolutely No Plan To Deal With Any Aspect Of The Pandemic" Edition

Fox News has now been hyping Trump's latest remarks from the White House, which we still haven't seen yet, for well over two hours pic.twitter.com/Qhmehb5cU3
— Aaron Rupar (@atrupar) May 13, 2020

Trump seems to think that children live at school and all their teachers are young and healthy https://t.co/sSqzGp0VpX
— Robert Maguire (@RobertMaguire_) May 14, 2020

Trump, who promised to release his returns during the 2016 campaign and then broke decades of precedent by not doing so, now says of White House lawyers' efforts to make sure his finances stay undisclosed, "you have a situation where a president has to be able to focus on this." pic.twitter.com/GU72vJfNi1
— Aaron Rupar (@atrupar) May 13, 2020

How many times does he have to explicitly admit he’s focused on the election far more than public health for people to believe it? https://t.co/ahJ1sBE6jg
— Schooley (@Rschooley) May 13, 2020

I'm with the guy who didn't suggest I put bleach inside my body to treat coronavirus pic.twitter.com/D5uOmbjVFn
— Aaron Rupar (@atrupar) May 13, 2020

"What's" is doing a herculean amount of work in this chyron. Trump can't even explain what "Obamagate" is! pic.twitter.com/lU7NsNKl8W
— Aaron Rupar (@atrupar) May 13, 2020

Note how Rand Paul has moved the goalposts for justifiable unmasking all the way to "we're going to blow up the Capitol." Apparently the federal government investigating anything short of a mass murder plot is an abuse of power. pic.twitter.com/zLvbV9eNDR
— Aaron Rupar (@atrupar) May 13, 2020

Don't lose the plot. We're hearing retreads of stuff from two three and four years ago because the White House really wants to move on from the pandemic which will soon have killed 100,000 Americans and has cratered the national economy.
— Josh Marshall (@joshtpm) May 13, 2020

They're playing their greatest hits from years ago as even their biggest fans, don't like the new material much.
— GMcKeown (@GerMcK1976) May 13, 2020

Laura Ingraham is still talking about Hydroxychloroquine... She finishes with “Take that FDA!” pic.twitter.com/U3TEtYfTSM
— Acyn Torabi (@Acyn) May 14, 2020

Today, his attorneys are arguing that releasing his financial documents from when he was a private citizen, would be too distracting for him to do his job. #TrumpTaxReturns #VoteBlue
— Ty_Paul_ 🌐 (@ty_paul_) May 12, 2020