The Death Of Truth 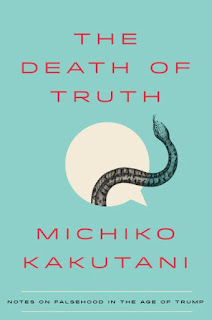 Michiko Kakutani was a book critic at The New York Times for more than three decades. She has written The Death of Truth: Notes on Falsehood in the Age of Trump.


[I]n this tight volume [160 pages], Kakutani teases out seemingly disparate strands of cultural and political developments in the United States and weaves them together into a thorough yet readable narrative of how America grew into a place where truth is subjective, and a reality TV star can become its leader. ...

This work is interested less in the fanaticism of true believers than in the complicity of the average citizen, and the ways in which the entire system shifted away from factuality to subjectivity over the past sixty or so years.

[H]er analysis of cultural trends and the rise of subjectivity adds most to the conversation — and is perhaps the most controversial of her targets. ... "The postmodern argument that all truths are partial (and a function of one's perspective) led to the related argument that there are many legitimate ways to understand or represent an event...[I]t's also been exploited by those who want to make the case for offensive or debunked theories, or who want to equate things that cannot be equated." ...

She quotes Newt Gingrich, the architect in many ways of the Republican party we currently have, from a 2016 interview in which he makes false claims regarding crime rates. When called out for claiming FBI statistics were only "theoretically true," he responded, "What I said was equally true. People feel it."

That attitude — that an opinion, if deeply felt, can stand counter to a fact — is likely all-too familiar at this point. ... The Trump administration, with their alternative facts, is speaking the language of a society that leans more heavily on opinion than objective reality and has become more reliant on personal narrative than fact for understanding the world around them. ...

As a result, opinions that are not backed up by facts are given airtime and normalized by a mass media that does not know how to navigate a surreal world they, in part, helped build — perpetuating the cycle rather than breaking out of it.

A lengthy excerpt from the book was published by The Guardian.


If a novelist had concocted a villain like Trump – a larger-than-life, over-the-top avatar of narcissism, mendacity, ignorance, prejudice, boorishness, demagoguery and tyrannical impulses (not to mention someone who consumes as many as a dozen Diet Cokes a day) – she or he would likely be accused of extreme contrivance and implausibility. ... But the more clownish aspects of Trump the personality should not blind us to the monumentally serious consequences of his assault on truth and the rule of law, and the vulnerabilities he has exposed in our institutions and digital communications. It is unlikely that a candidate who had already been exposed during the campaign for his history of lying and deceptive business practices would have gained such popular support were portions of the public not blase about truth-telling and were there not systemic problems with how people get their information and how they've come to think in increasingly partisan terms.

With Trump, the personal is political, and in many respects he is less a comic-book anomaly than an extreme, bizarro-world apotheosis of many of the broader, intertwined attitudes undermining truth today, from the merging of news and politics with entertainment, to the toxic polarisation that's overtaken American politics, to the growing populist contempt for expertise. ...

For decades now, objectivity – or even the idea that people can aspire toward ascertaining the best available truth – has been falling out of favour. Daniel Patrick Moynihan’s well-known observation that “Everyone is entitled to his own opinion, but not to his own facts” is more timely than ever: polarisation has grown so extreme that voters have a hard time even agreeing on the same facts. This has been exponentially accelerated by social media, which connects users with like-minded members and supplies them with customised news feeds that reinforce their preconceptions, allowing them to live in ever narrower silos. ...

Orwell wrote that "political chaos is connected with the decay of language", divorcing words from meaning and opening up a chasm between a leader's real and declared aims. This is why the US and the world feel so disoriented by the stream of lies issued by the Trump White House and the president's use of language to disseminate distrust and discord. And this is why authoritarian regimes throughout history have co‑opted everyday language in an effort to control how people communicate ...

[Trump's] personal assault on the English language. His incoherence (his twisted syntax, his reversals, his insincerity, his bad faith and his inflammatory bombast) is emblematic of the chaos he creates and thrives on, as well as an essential instrument in his liar's toolkit. His interviews, off‑teleprompter speeches and tweets are a startling jumble of insults, exclamations, boasts, digressions, non sequiturs, qualifications, exhortations and innuendos – a bully's efforts to intimidate, gaslight, polarise and scapegoat.

Precise words, like facts, mean little to Trump, as interpreters, who struggle to translate his grammatical anarchy, can attest. Chuck Todd, the anchor of NBC's Meet the Press, observed that after several of his appearances as a candidate Trump would lean back in his chair and ask the control booth to replay his segment on a monitor – without sound: "He wants to see what it all looked like. He will watch the whole thing on mute."