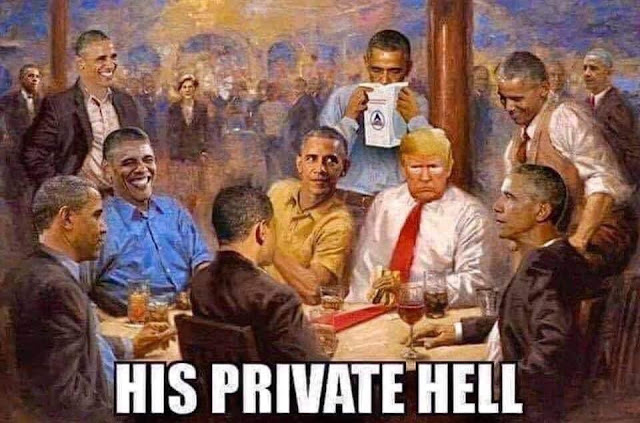 Psychological projection is a defense mechanism in which the human ego defends itself against unconscious impulses or qualities (both positive and negative) by denying their existence in themselves while attributing them to others. ...

Freud considered that, in projection, thoughts, motivations, desires, and feelings that cannot be accepted as one's own are dealt with by being placed in the outside world and attributed to someone else. What the ego repudiates is split off and placed in another.

Freud would later come to believe that projection did not take place arbitrarily, but rather seized on and exaggerated an element that already existed on a small scale in the other person. ...

90,000 Americans are dead because of a pandemic that Trump was unprepared for and has thrown in the towel on mitigating https://t.co/qvnz5vGc5J
— Aaron Rupar (@atrupar) May 17, 2020

Pres Trump was asked to respond to Pres. Obama’s commencement criticism of virus response. He said he had not seen Obama’s remarks but leveled a charge without specifics saying, “He was an incompetent president - grossly incompetent. That’s all I can say.”
— Kelly O'Donnell (@KellyO) May 17, 2020

The level of projection here is just incredible pic.twitter.com/1rzNgKl9Qa
— Aaron Rupar (@atrupar) May 17, 2020

Trump’s unfounded attacks on others of the things he is demonstrably guilty of aren’t mere projection. They are a tactic to lower the moral bar for all, to wave off his corruption and abuse as normal.
— Garry Kasparov (@Kasparov63) May 17, 2020

Seems it’s not even a national scandal anymore that the president is promoting neo-Nazis on Twitter because it’s just normal and expected now, just another day https://t.co/5CFzE8AQfj
— Christopher Mathias (@letsgomathias) May 17, 2020

The President of the United States is literally retweeting a white supremacist organization here. https://t.co/923XZnMax2
— Justin Baragona (@justinbaragona) May 16, 2020

It's especially worrying when states blow past all-time epidemiological records on a weekend. Reporting slows way down on weekends, usually counts dip below mid-week levels just due to the lag. https://t.co/sYO2cmovf4
— Lindsay Beyerstein (@beyerstein) May 17, 2020

“The end result of so much noise is what I’ve called ‘manufactured nihilism,’ a situation in which people are so skeptical about the possibility of truth that they give up the search.” https://t.co/7JG3nm6DnE
— Bill Kristol (@BillKristol) May 17, 2020

Here’s the White House press Secretary saying yesterday that Obama left them depleted stockpiles of medical supplies, and here’s a February press release about all the medical supplies the US government is sending to China. pic.twitter.com/GiJzzN5HRX
— Matthew Yglesias (@mattyglesias) May 17, 2020

Here's the Health and Human Services secretary shrugging at people refusing to help stop the spread of a deadly pandemic. https://t.co/M7pK1t4mqz
— digby (@digby56) May 17, 2020

Navarro: "We all know about the billion dollars that [Hunter Biden] took from the Chinese."

Stepahanopoulos: "That's not factual, sir. That's not a fact."

Why are so many dying? Because the Trump family still appears to believe that the disease is a "hoax." It's hard to effectively fight a disease if you don't think it's real. https://t.co/ueIxKdkoNn
— Ronald Klain (@RonaldKlain) May 17, 2020

I’ve been writing about conspiracy theories and misinformation for more than a decade. But QAnon, which first emerged in 2017, always seemed different. (1/10)https://t.co/jeTsC3D5xe pic.twitter.com/gWwMpdQcZq
— Adrienne LaFrance (@AdrienneLaF) May 14, 2020