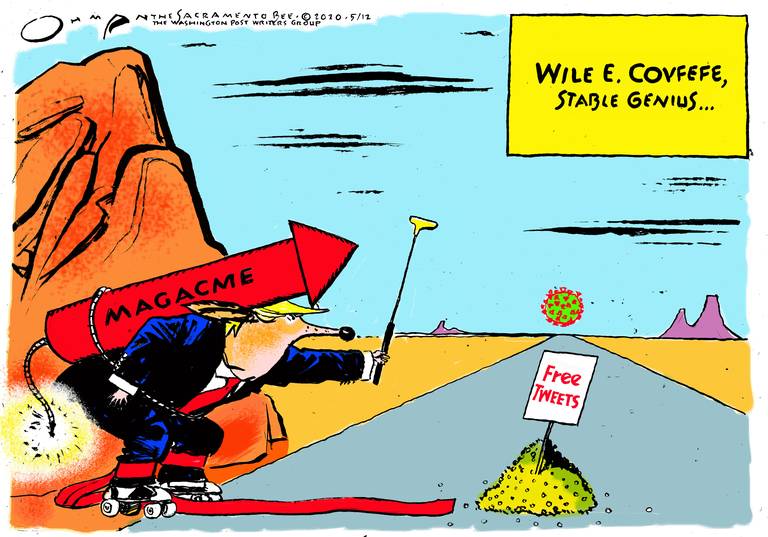 
Trump has still not figured out that it was not possible for Obama to leave him tests for a virus that didn't even exist until 3 years after he left office https://t.co/ATyme7QPHD
— Aaron Rupar (@atrupar) May 18, 2020

Trump understands it would have been impossible for Obama to leave him tests for a virus that didn't exist. But what Trump and his handlers understand, is just how stupid his base is. He knows that the word "Obama" is a dogwhistle that will cloud any shred of coherent thought.
— Sam (@soup717) May 18, 2020

Now that Barr is pretending to be a man of principle and says he isn't criminally investigating Biden and Obama, CNN's Rick Santorum did the pivot to what they're really about: not doing any investigation of Trump once he's out of office.
— digby (@digby56) May 18, 2020

What could possibly go wrong? pic.twitter.com/fBNqGGfxBW
— Aaron Rupar (@atrupar) May 18, 2020

Give me Applebee's (not Curbside Pickup -- I want to eat inside the damn place) or give me death pic.twitter.com/Q2OazpedXy
— Aaron Rupar (@atrupar) May 18, 2020


"More Than All Countries In The World, Combined"


Even when the truth will do, Trump lies. His latest coronavirus testing tweet shows it. https://t.co/bc7XSLqRzj
— Aaron Rupar (@atrupar) May 18, 2020

Trump cannot help himself, his need to lie is pathological. pic.twitter.com/wpoxQ5PmG9
— Carolyn from Maryland (@carolyn_from) May 18, 2020

So I guess the war on facts has a name now. pic.twitter.com/GQBMx7Q1O5
— Christina Wilkie (@christinawilkie) May 18, 2020

So Trump's press release states Biden's comments are coherent; they only seem to be incomprehensible!

Trump's team cannot do one single thing correctly. Also, Biden's campaign could easily make a five-hour clip of Trump's ongoing dementia. In fact, it would be hard to cut it down to five hours.


Trump's forces have pretty much rendered the Congress impotent, going so far as to argue before the Supreme Court last week that not only should a sitting president be immune from any and all investigation and prosecution, he's also immune from congressional oversight. It's well within the realm of possibility that the right-wing majority on the court will see it their way — at least when it comes to Republican presidents. ...

The sheer magnitude of corruption in the Trump administration has been unprecedented and yet it all seems like a distant memory. One of Trump's great gifts has been to offer up so much carnage, graft, incompetence and scandal that it’s hard to keep track of it all. ...

Trump and his henchmen no longer care about "optics," if they ever did, and now believe there are no legal constraints on their behavior at all. If a government watchdog displeases them, they just fire her and install a loyal minion in her place. ... They know their media friends will cover for them and they feel no fear of Congress or the courts. ...

Trump has demonstrated for all the world to see how easy it is for a corrupt leader with no integrity or honor to use the power of the presidency to dismantle all the levers of accountability, as long as he has enough members of the Senate behind him. A more intelligent and cunning demagogue will be able to use this much more efficiently and ruthlessly than he has done.

Georgia Is Lying About Its Covid-19 Cases (So Is Nebraska, Florida, Texas . . .)


In the latest bungling of coronavirus tracking data, a chart on the Georgia Department of Public Health's website appeared to show good news: new confirmed cases had dropped every day for the past two weeks.

“When you test, you have a case. When you test, you find something is wrong with people. If we didn’t do any testing, we would have very few cases.” pic.twitter.com/YeXljUMCyP
— Erin Chobo (@ChoboErin) May 18, 2020


Have You Missed Karl Rove?


If Karl Rove thinks a black president speaking truth to black students is a “political drive-by shooting,”
then a white guy lying about a black president’s birth certificate for 5 1/2 years must be a damn cross burning. https://t.co/oeNg0NcfOx
— Keith Boykin (@keithboykin) May 18, 2020

David Freedlander @freedlander: "Over the weekend the president's son accused Joe Biden of being a pedophile"

Jeet Heer @HeerJeet: "Grateful to Karl Rove for providing a useful corrective to the current tendency to whitewash the Bush presidency."

Oliver Willis @owillis: "i think karl rove's just jealous that trump is going to get more americans killed than bush"

Chris Lu @ChrisLu44: "As Karl Rove criticizes Obama's virtual commencement address to HBCUs, let's remember that Trump is forcing 1,000 West Point cadets to return to campus for an in-person graduation that risks their safety - just to stroke his own ego."


Alex Azar literally says here that America is leading the world in deaths because of our racial diversity — and particularly because of black Americans and all of our co-morbidities. Like, he said it out loud. Don’t tell me race has nothing to do with efforts to end shutdowns. https://t.co/JphP7j2Qiu
— Ida Bae Wells (@nhannahjones) May 18, 2020


There Is No Vaccine For Stupid


Stars! They Are Just Like Us! Their Couches Get Covered In Blood!


It's 2006. I'm working at Esquire, assigned to write about George Clooney. He invites me to his house. Now, understand something: Celebrities never invite you to their house. Except for George Clooney, apparently. The house! Amazing.
— Chris Jones (@EnswellJones) May 15, 2020