Whatever we did to deserve this, we are sorry ... so very very sorry ... 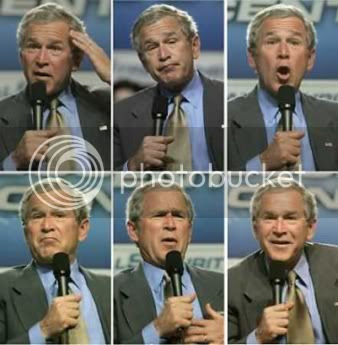 The US military staged the interrogations of terrorism suspects for members of Congress and other officials visiting the military prison in Guantanamo Bay, Cuba, to make it appear the government was obtaining valuable intelligence [according to former Army Sgt. Erik Saar] ...

Michael Ratner, president of the Center for Constitutional Rights ... said Saar's claims support lawyers' suspicions that the official tours of Guantanamo were phony. "They couldn't show people what they were really doing, because what they were really doing was illegal and inhumane," Ratner said. "It's such a fraud. It reminds me of the special concentration camps set up in World War II. They would take the Red Cross there to see there was an orchestra and all sorts of nice things.

Also, this interview with fired FBI translator Sibel Edmonds should be required reading. FUBAR barely scratches the surface.
Posted by allan at 2:22 PM No comments:

Insurgents unleashed a series of car bombings and other attacks across Iraq on Friday, killing at least 41 people, including three US soldiers ... At least 11 car bombs exploded in and around Baghdad on Friday, including four suicide attacks in quick succession in the Azamiyah section of central Baghdad.

Former FBI contract translator and whistleblower Sibel Edmonds and her attorneys were ordered removed from the E. Barrett Prettyman US Courthouse so that a three-judge US Court of Appeals panel could discuss her case in private with Bush administration lawyers. ...

Edmonds is appealing the Bush administration’s arcane use of "state secrets privilege," invoked last year to throw out her US District Court lawsuit alleging retaliation for telling FBI superiors about shoddy wiretap translations and allegations that wiretap information was passed to the target of an FBI investigation. ...

Criminal evidence in Edmonds' explosive case is apparently getting too close to Washington officials, since the former contract linguist also told us she would not deny that "once this issue gets to be ... investigated, you will be seeing certain people that we know from this country standing trial; and they will be prosecuted criminally," revealing the content of the FBI intercepts she heard indicates that recognizable, very high-profile American citizens are linked to the 9/11 attacks. ...

When we asked how many Americans were named in the intercepts, Edmonds said "There is direct evidence involving no more than ten American names that I recognized," further revealing that "some are heads of government agencies or politicians -- but I don’t want to go any further than that," as we listened in stunned silence.

When asked in 2002 by CBS 60 Minutes co-host Ed Bradley, "did she seem credible to you? Did her story seem credible?" Senator Charles Grassley (R-IA) said "Absolutely, she’s credible. And the reason I feel she’s very credible is because people within the FBI have corroborated a lot of her story."

Before I split this blog off from Joy of Sox, I wrote about Edmonds several times. ... For more info on Edmonds, click here and here and here. And sign the petition demanding the release of her testimony on 9/11.

Judges tossing Edmonds and her lawyers out of court so they can discuss her case about government complicity in 9/11 in secret with lawyers from that same government ... that doesn't sound completely kosher, does it?
Posted by allan at 5:00 PM No comments:

Another Lost Opportunity, from Newsweek's Michael Isikoff and Mark Hosenball:

In the spring of 2001, one of the US government's most valuable terror informants gave the FBI a far more alarming account of Al Qaeda plans to attack inside the United States than has ever been publicly disclosed, according to newly available court documents.

Algerian expatriate Ahmed Ressam, whose sentencing for a Millennium-eve plot to blow up the Los Angeles airport was unexpectedly postponed today, told bureau interrogators nearly four years ago that Al Qaeda commander Abu Zubaydah had been discussing plans to smuggle terrorist operatives and explosives into the country for the purpose of launching a strike on US soil ...

Perhaps no better sign of that was the inclusion of some of Ressam's information in the now famous presidential daily briefing (PDB) — entitled "Bin Laden Determined to Strike in US" - that was presented to President Bush by the CIA on Aug. 6, 2001. ...

[I]t turns out, according to the new court documents, the information from Ressam that was contained in the PDB was watered down and seemed far more bland than what the Algerian terrorist was actually telling the FBI.

Isikoff and Hosenball write that while there "is no indication that Ressam had specific knowledge of the 9/11 attacks themselves," the information he was giving about possible attacks inside the US "didn't get wider circulation within the US government" and did nothing "to shift US intelligence community assumptions that Al Qaeda was fixated on attacking US targets overseas rather than inside the country."

I guess "Bin Laden Determined to Strike in US" was simply too confusing.
Posted by allan at 7:58 PM No comments:

Terrified US Soldiers Are Still Killing Civilians With Impunity, While The Dead Go Uncounted:

It is very easy to be accidentally killed in Iraq. US soldiers treat everybody as a potential suicide bomber. If they are right they have saved their lives and if they are wrong they face no penalty. ...

Every Iraqi has stories of friends or relatives killed by US troops for no adequate reason. Often they do not know if they were shot by regular soldiers or by members of western security companies whose burly employees, usually ex-soldiers, are everywhere in Iraq. ...

US firepower ... cannot be used in built up areas without killing or injuring civilians. ... The immunity of US troops means that there is nothing to inhibit them opening fire in what for them is a terrifying situation.

You won't be reading anything like this in the US media anytime soon. The article accurately notes that US troops are scared shitless and are shooting at anything that moves. The sad part is that more than a few of them are well aware that they are not protecting or defending their country. They are disposable cogs in the machinery of multi-national corporate interests that couldn't care less whether they live or die.
Posted by allan at 2:55 PM No comments:

The time has come that the American people know exactly what their Representatives are doing here in Washington. Are they feeding at the public trough, taking lobbyist-paid vacations, getting wined and dined by special interest groups? Or are they working hard to represent their constituents? The people, the American people, have a right to know ... I say the best disinfectant is full disclosure, not isolation.

A plane trip to London and Scotland in 2000 by then-House Majority Whip Tom DeLay (R-Tex.) was charged to an American Express card issued to Jack Abramoff, a Washington lobbyist at the center of a federal criminal and tax probe, according to two sources who know Abramoff's credit card account number and to a copy of a travel invoice displaying that number.

DeLay's expenses during the same trip for food, phone calls, and other items at a golf course hotel in Scotland were billed to a different credit card also used on the trip by a second registered Washington lobbyist, Edwin A. Buckham, according to receipts documenting that portion of the trip.

A Little Bit Closer To Equality

It's a first for Connecticut and for the nation. With a stroke of the pen from Governor Jodi Rell, Same Sex Civil Unions are now legal in Connecticut. The state is the first in the country to do so without being forced by the courts.

The State Department decided to stop publishing an annual report on international terrorism after the government's top terrorism center concluded that there were more terrorist attacks in 2004 than in any year since 1985 ...

[C]urrent and former officials charged that Secretary of State Condoleezza Rice's office ordered "Patterns of Global Terrorism" eliminated several weeks ago because the 2004 statistics raised disturbing questions about the Bush's administration's frequent claims of progress in the war against terrorism.

"Instead of dealing with the facts and dealing with them in an intelligent fashion, they try to hide their facts from the American public," charged Larry C. Johnson, a former CIA analyst and State Department terrorism expert ...

Created last year on the recommendation of the independent commission that investigated the Sept. 11, 2001, terrorist attacks, the center is the government's primary organization for analyzing and integrating all U.S. government intelligence on terrorism.

The Bush Administration M.O.: Instead of working harder to combat terrorism, they'd rather hide the facts and hope nobody pays attention. Any why not? It's working quite well for them.
Posted by allan at 2:57 PM No comments:

Ron Paul of Texas, speaking before the House of Representatives on April 6, 2005:

The information Congress was given prior to the war was false. There were no weapons of mass destruction; the Iraqis did not participate in the 9/11 attacks; Osama bin Laden and Saddam Hussein were enemies and did not conspire against the United States; our security was not threatened; we were not welcomed by cheering Iraqi crowds as we were told; and Iraqi oil has not paid any of the bills. ...

Praise for the recent election in Iraq has silenced many critics of the war. Yet the election was held under martial law implemented by a foreign power, mirroring conditions we rightfully condemned as a farce when carried out in the old Soviet system and more recently in Lebanon. ... The whole process is corrupt. It just doesn't make sense to most Americans to see their tax dollars used to fight an unnecessary and unjustified war. First they see American bombs destroying a country, and then American taxpayers are required to rebuild it. ...

Considering the death, destruction, and continual chaos in Iraq, it's difficult to accept the blanket statement that the Iraqis all feel much better off with the U.S. in control rather than Saddam Hussein. ... But there's another question that is equally important: "Are the American people better off because of the Iraq war?"

The families and the 40,000 troops who were forced to re-enlist against their will -- a de facto draft-- are not feeling better off. They believe they have been deceived by their enlistment agreements. The American taxpayers are not better off having spent over 200 billion dollars to pursue this war, with billions yet to be spent. ...

The entire speech is worth reading.
Posted by allan at 4:43 PM No comments:

US Relied On 'Drunken Liar' To Justify War

The story has a twist -- it wasn't Dubya.

An alcoholic cousin of an aide to Ahmed Chalabi has emerged as the key source in the US rationale for going to war in Iraq.

According to a US presidential commission looking into pre-war intelligence failures, the basis for pivotal intelligence on Iraq's alleged biological weapons programmes and fleet of mobile labs was a spy described as 'crazy' by his intelligence handlers and a "congenital liar" by his friends.

The defector, given the code-name Curveball by the CIA, has emerged as the central figure in the corruption of US intelligence estimates on Iraq. Despite considerable doubts over Curveball's credibility, his claims were included in the administration's case for war without caveat. ...

Intelligence analysts who voiced concern were "forced to leave" the unit mainly responsible for analysing his claims, the commission found. At every turn analysts were blocked by spy chiefs and their warning never passed on to policy-makers.