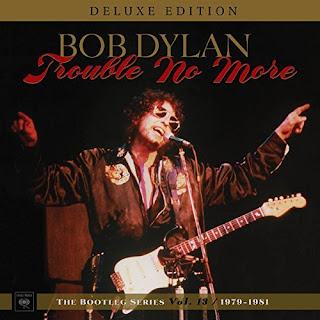 Lately I've been having evil dreams, I wake up in a cold blue glare
I run the tape back in my mind, wondering if I took the wrong road somewhere
Searching for the truth the way God designed it
When the real truth is that I may be afraid to find it
– Need A Woman
Throughout the summer of 1979, rumors circulated that Bob Dylan had become a born-again Christian. To most of his fans, the idea was preposterous. How could Dylan, a Jewish protest singer and free-thinking rock and roll iconoclast, have embraced Christian fundamentalism?

In August, Dylan released Slow Train Coming, a set of deeply religious songs that more than confirmed the earlier speculation. Dylan frequently had used Biblical imagery and references in his lyrics, but this was entirely different, and much more than literary allusion. While the music was rooted in rock and R&B, the lyrics were unambiguous expressions of faith in Christ and stark denunciations of non-believers. Insisting "there's only one authority and that's the Authority on high", Dylan pointedly asked: "When You Gonna Wake Up?"

Less than two weeks after a three-song appearance on Saturday Night Live in late October, Dylan began a tour of small theaters on the west coast. That was when fans got the real shock. Dylan ignored his entire back catalogue, refusing to play any song written before his conversion.

This was the bravest, most mystifying, most controversial, and utterly unexpected twist from a man famed for confounding expectations. Dylan's new stance reverberated across musical, cultural, and religious lines, producing a wider and more profound shock than when he famously plugged in an electric guitar at the 1965 Newport Folk Festival. As Dylan biographer Howard Sounes put it, "Electricity had annoyed folk purists, but religion bothered everybody."

On the surface, what is now generally referred to as Dylan's "gospel period" was an abrupt and bewildering turn of events. Yet it was wholly in keeping with Dylan's artistic sensibilities. As he has eagerly absorbed all forms of American music – folk, country, blues, gospel – Dylan has refused to remain in any one musical place for very long. The creative spark Dylan derives from swimming against the cultural tide, fueled by the friction between his art and the public's expectations and reactions, has spurred him to create some of his best music. Invariably, by the time Dylan's fans have become comfortable with what he's done, he's already charting a course in another direction.

Slow Train Coming and Saved are message albums, just as Dylan's folk masterpieces are, even if the message wasn't what his fans wanted to hear. A closer look at Dylan's career reveals how far back he had been searching for something, asking family, friends, and fellow musicians about prayer, religion, and Christianity. His lyrics on John Wesley Harding are drawn from and inspired by his Bible reading. Street-Legal, the record that preceded Slow Train Coming, maps Dylan's inner turmoil following his divorce and leaves him on the cusp of a momentous transformation: "There's a new day at dawn and I've finally arrived. .. I can't believe it, I can't believe I'm alive."

Dylan began 1979 by attending Bible study classes at the Vineyard School of Discipleship, near his home in California. (Several members of his Rolling Thunder and Street-Legal bands were either born-again or belonged to the Vineyard Fellowship.) When Dylan began writing songs from a strict religious perspective, he was both surprised and scared. "I didn't like writing them. I didn't want to write them ... I didn't want to sing them." But by April, he had accepted this new direction: those songs would comprise his next album.

On Slow Train Coming and Saved, Dylan portrays himself as someone whose errant way of living should have landed him in a "pine box" years ago. Blinded by the devil, beaten down and empty inside, he was rescued by a "precious angel" who led him to the Lord. He feels he does not deserve this gift of salvation. "You have given Your life for me/How can I live for You?"

Not only has Dylan vowed to change his way of thinking – to "stop being influenced by fools" – he thinks you should, too. According to Dylan, we are all going to have to serve either the Devil or the Lord: "There ain't no neutral ground". He wants to know: "Are you ready for the judgment?/Are you ready for that terrible swift sword?" Dylan confesses some self-doubt – "I hope I'm ready" – but remains resolute: "I am pressing on to the higher calling of my Lord."

Dylan says he has been shunned and exiled by his "so-called friends" because "I don't be like they'd like me to". The religious context is new, but Dylan's image of himself as an uncompromising outsider is one of his recurring themes:

"If I'd lived my life by what others were thinking, this heart inside me would have died" (Up To Me, 1974)

Dylan's religious lyrics are more straightforward than his usual writing, but their simplicity can be deceptive. The songs convey a lot of information, which may not be obvious without some familiarity with the Bible. Dylan's artistry is bringing together multiple scriptural ideas, yet still leaving the lyric with a light, flowing feel.

The attention paid to these religious lyrics obscured the fact that Dylan had also written some magnificent music. Both albums were recorded at Alabama's famed Muscle Shoals Sound Studios with legendary producer Jerry Wexler. On Slow Train Coming, Dylan's backing band, led by guitarist Mark Knopfler and augmented by a horn section, gave many of the songs a warm R&B groove.

Anyone hoping for a return of the "old Dylan" in 1980 would have been seriously disappointed by Saved. The music was pure gospel, though it failed in capturing the power and passion of the band's live sound. In singing almost exclusively about his personal redemption, Dylan offered an astonishing affirmation of his faith in the face of intense criticism.

Back in November 1979, a San Francisco Chronicle writer called Dylan's initial gospel concert "god-awful", and that set the tone for many subsequent reviews. There were news reports of hostile crowds booing and storming out of theaters, but bootleg recordings of the shows reveal that Dylan's songs of faith were often warmly received. There were some rough audiences, of course. The band took a tremendous amount of abuse in Tempe, Arizona, in late November, although Dylan made things worse by antagonizing the hecklers.

Each night began with a short set of traditional spirituals sung by a trio of female backup singers. Dylan would then come out with the full band and play most of Slow Train Coming. He would take a short break while the women sang another song or two, returning for another set and an encore. He usually played between 16-18 songs. The second half of each show consisted almost entirely of songs no one had ever heard (most of them would be released on Saved). Angry and confused fans yelled out requests for Dylan's hits – or any of his old songs – but he ignored them.

Despite the negative reaction, Dylan was playing some of the most exciting music of his life. (That sentence could also have been written in 1966.) At first, the band was tentative – getting accustomed to the shouts from the audience and feeling its way through the newer, Saved songs, even as Dylan was tinkering with the arrangements. They could rock, but it was the slower, more reflective songs – "I Believe In You," "When He Returns," "Saving Grace" – that stood out every night.

Dylan was singing with urgency, vulnerability, and sincerity, sharing something intensely personal, trying to connect with his audience in a way he rarely had before. It seems to be the time when he was least interested in playing the role of "Bob Dylan".

He was also uncharacteristically talkative during many of these shows, lecturing the crowds about the Book of Revelation and the "end times". Many of his monologues (often referred to as "raps" or "sermons") – how Russia's recent invasion of Afghanistan presaged the coming battle of Armageddon – were heavily influenced by Hal Lindsey's book, The Late, Great Planet Earth.

As the tours went on, though, Dylan softened. He eased up on trying to convert the audience, and even joked about fans walking out on him. At one January 1980 show, while in the thick of playing the unreleased Saved material, he quipped, "And the hits just keep comin'." In April, Dylan added some fresh material to the set. One song, "Ain't Gonna Go To Hell For Anybody", was written after he met with several rabbis who urged him to return to his Jewish roots.

When Dylan played a series of concerts in November 1980 dubbed "A Music Retrospective", he added some of his earlier material to the set. He toured for most of 1981, playing a full mix of his music, both secular and sacred. On his 1984 tour, the gospel songs were all but absent, however, leading many people to assume Dylan had moved on, that his embrace of Christianity had been a passing phase. But Dylan has continued to play songs from Slow Train Coming and Saved at various points over the years and he has made references to his faith in his more recent songs.