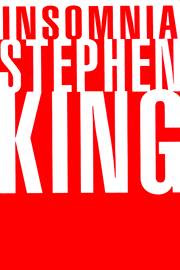 I'm back! And the Project continues...

Insomnia is the first book of this reading project that I actively disliked. I was bored. I did not like the supernatural elements. It was not up to King's usual standards. Writing about a book I finished 10 months ago would be a challenge. While I took notes while reading, they make little sense to me now. So I'm going post some snips about the book in the place of a lengthy review.


Insomnia is a unique hybrid, at once one of King's more down-to-earth and one of his more "cosmic" novels. Down-to-earth in that it stars Ralph Roberts and Lois Chasse, two senior citizens, who, up until the time the novel begins, have led a quiet, restrained existence. Cosmic in its consideration of human fate and destiny, and due to its explicit ties to King's The Dark Tower series ...

[T]he book can also be seen as another contemplation of Fate and Destiny, topics first explored at great length in The Dead Zone. ...

More of a dark fantasy than outright supernatural horror ... With this book, King continues to show a willingness to deal with modern social issues as well.


[Insomnia] is not as accessible to casual readers as, say, It or The Stand ... Its opening pages move slowly, creating a deliberate, off-kilter feel unlike any of King's other novels. While not dull, the opening sequences (with one startling and effective action sequence near the beginning of the novel) seem to meander without direction. ... It is as if the very structure of the book - both as a story and an object - is trying to induce in the reader the sense of unreality that King's main character, widower Ralph Roberts, suffers through as he loses more and more sleep. ...

If the opening of the novel is a rumination on age and death, the book now becomes an exploration of purpose. ... The concept of higher purpose versus free will has long interested King, playing out as central conflicts in The Dead Zone and It (not coincidentally, Insomnia is also set in Derry, the former home of It, eight years or so after the events of that novel); King would later look more directly at this struggle in Desperation, The Green Mile and Duma Key.

An imminent pro-choice rally, headed by abortion rights activist Susan Day, has divided the town by political and ethical lines, much as Castle Rock was divided by the upcoming church bingo event in Needful Things. Here, King approaches the pro-choice/pro-life issue judiciously, never letting his authorial voice take a side. Much of Insomnia tackles contemporary topics - feminism, spousal abuse, and homophobia among them (this latter most interesting, specifically addressing the murder of Adrian Mellon in It) - without allowing the novel to become mired in them, broaching them only in service to the plot. ...

Combining the philosophical questions of Greater Purpose and Higher Powers with such current hot-topics as domestic violence and abortion risks an agenda, but Insomnia works more subtly than that ... [Also] the novel is folded into the larger fiction of the Dark Tower novels.

Note: King absolutely lets his authorial voice take sides. He is clearly pro-choice. He paints the anti-choice side as complete nutcases and prone to violence.


All of which may sound incredibly far-fetched, but amazingly enough it succeeds as storytelling. True, Mr. King develops each nuance of his tale with glacial ponderousness. As always, his text is as full as an old Sears, Roebuck catalogue with brand-name provisions and appurtenances. And not a thought or an action can occur without its being underlined by reference to some popular song or phrase or book. The most elusive specter in this story is a fresh idea or an original turn of phrase.

Still, the narrative somehow holds you all the way to its fulminating climax. And this is followed by a scary-sweet aftermath that neatly resolves the story's exploration of aging and self-sacrifice.


Forget the lean, mean King of Misery, Gerald's Game and Dolores Claiborne. This is the other King - the Grand Vizier of Verbosity who gave us It, The Tommyknockers and Needful Things. There's much of everything in these 800 pages, including the worthy. Notable is a rare septuagenarian hero, recently widowed Ralph Roberts, whose broodings on old age immerse readers into the aging psyche almost as clearly as other King heroes have revealed the minds of children. Then there's the slam-bang final 300 pages, in themselves a novel's worth of excitement as Ralph battles demonic entities to prevent a holocaust in his small town of Derry, Maine (site of It). The problem is that the finale is preceded by more than a novel's worth of casual, even tedious buildup: Ralph's growing insomnia; his new ability to see auras around all living things; his dismay as Derry's citizens divide violently over the impending visit of a radical pro-lifer; his slow realization that celestial forces have marked Derry as a battleground between good and evil. King remains popular fiction's most reliable mirror of cultural trends, in particular our continuing love affair with horror (Barker and Koontz are palpable influences here). If this novel were liposuctioned, it would rank among King's best; as is, it's another roly-poly volume from a skilled writer who presumes his readers' appetite for words is more gourmand than gourmet.


After his wife's death, Ralph Roberts begins to suffer from insomnia. He comes aware that something is wrong with his neighbor, Ed Deepneau, after several disturbing incidents, including the beating of his wife, Helen. Ralph begins questioning his sanity after he starts seeing auras around people and "little bald doctors". Meanwhile, Ed has joined forces with a pro-life group to protest a speech given in Derry by noted-pro-choice activist, Susan Day.

Ralph discovers that a similar thing has been happening to his sweetheart, Lois Chasse. Together, they confront the little bald doctors. They name the two that they talk to Clotho and Lachesis and the other one, Atropos. Clotho and Lachesis want to preserve the natural order of death while Atropos brings chaos. They reveal that Atropos is serving as an agent of the Crimson King to bring about the death of everyone who attends Susan Day's speech through the person of Ed Deepneau.

Ralph and Lois venture into Atropos' lair in order to thwart his part of the Crimson King's plan. They are partially successful, but Atropos promises revenge. ...

King's incorporation of elements of his Dark Tower series into his non-DT fiction is interesting. While there have always been connections between his books, this is different. It's melding his fantasy world with what is, ostensibly, the "real world". And it's something he will do more of in his later novels.