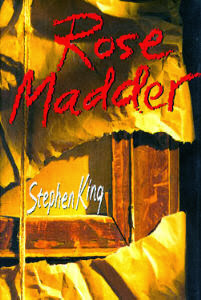 Rose Madder is the third book in Stephen King's feminism trilogy (which includes the earlier novels Gerald's Game and Dolores Claiborne) and is his most unflinching look at spousal abuse.

Rose Daniels has been married to Norman Daniels, a decorated police officer, for fourteen years. During that time, Rose has suffered broken bones, cracked ribs, lost teeth, and, during one particularly horrendous beating - which opens the novel - suffered a miscarriage. She has been punched in the kidneys so often, she barely notices the blood in her urine anymore. Through those fourteen years, Rose "existed in a daze so deep it was like death ... [as if] her life wasn't really happening."

And then, one day while making the bed, a single drop of blood falls from her bruised nose. Something awakens in Rose's mind and - with her husband at work - she realizes she must flee in order to save her life. She grabs his ATM card, and walks out the door.

King does a superb job of articulating the conflicting thoughts and fears in Rose's head as she eventually makes her way to the bus station. She fears being alone in the world - she initially seems nearly agoraphobic - but she knows with certainty that she cannot return to her abusive marriage. But she also knows that Norman will not rest until, using his police skills and connections, he tracks her down and kills her.

Rose Madder is the story of how Rose McDaniels (she begins using her birth name again) comes out of the fog of the abusive relationship and begins to re-create her life. She finds a women's shelter, Daughters and Sisters, where she is given a room and a job at a local hotel. "You can be free if you want to," she is told. "Free of his hands, free of his ideas, free of him."

A trip to a pawn shop to sell her wedding ring becomes a momentous event in her new life. Rose learns that the big diamond is fake, but another customer in the shop hears her voice and offers her a job recording books on tape. The proprietor of the shop, Bill Steiner, falls in love with Rose. And on her way out of the shop, Rose is captivated by a painting of a woman in a rose madder-coloured toga, with her back to the viewer, gazing at a ruined stone temple. It is not a particularly good painting, Rose admits, but it seems to call to her. It is "the first meaningful purchase of her new life".

Meanwhile, Norman has taken a leave of absence from the force and is in pursuit of his wife. Using his skills as an investigator (and what seems to be some supernatural ability to imagine where Rose might go), he arrives in Liberty City and begins tracking her down. There will obviously be at least one confrontation between Rose and Norman before the novel is over.

Rose's painting is the true supernatural element in the novel. The painting is a portal to another world, and one night Rose enters that world. A woman she meets there (Wendy Yarrow, a prostitute that Norman and his partner beat and raped, and then killed after she filed a lawsuit against the department) tells her she must perform a dangerous task for the woman in the painting, rescuing a baby from a temple guarded by a one-eyed bull named Erinyes. King's use of Greek mythology was lost on me - and dragged the story of Rose's new life and Norman's pursuit to a halt.


What's going on here, as Rose learns when she visits, is a mixture of the myths of the Minotaur in the maze and of Demeter looking for Persephone, her daughter by Zeus, after Persephone has been abducted into the underworld. ... The creature in the maze [in the novel] isn't exactly the Minotaur, since it's a bull, and it's called Erinyes, a name which means fury, and is one of Demeter's epithets. Later the bull becomes Norman, or Norman becomes the bull: the monster is a metaphor for the less-than-human male.


The sudden appearance of the mystic (and mythic) seem almost intrusive, as do the supernatural overlays in otherwise mainstream novels like Cujo, Blaze, The Girl Who Loved Tom Gordon, and even the out-of-context psychic flashes in Dolores Claiborne and Gerald's Game. However, where the supernatural in those books could have easily been excised (improving the stories in most cases), in Rose Madder, the painting and the world through it become intrinsic to the plot. Here, King seems to be experimenting with magic realism, a genre of writing in which fantastic elements are introduced into an otherwise straightforward realistic story.

King also tosses in a few elements of The Dark Tower. During Rose's initial journey into the painting, Wendy Yarrow mentions the concept of ka and refers to the dead in the City of Lud.

Years later, in On Writing, King stated that Rose Madder and Insomnia are "stiff, trying-too-hard novels".

Stanley Wiater, Christopher Golden, and Hank Wagner, writing in The Complete Stephen King Universe, note that the theme of spousal/child abuse has appeared in many of King's novels. In retrospect, "it seems as if Stephen King had been building toward Rose Madder his whole career."


The horror of domestic violence and a harsh criticism of American patriarchal society have been the dominant tropes in King's novels from the beginning of his career. ... For King in the 1990s, domestic violence in the private sphere is a metaphor for the ultimate violence of American patriarchal society, the public sphere that condones, enables, and sometimes even rewards violence against women.

Gerald's Game, Dolores Claiborne, Insomnia, and Rose Madder - four consecutive novels in the early 1990s - feature "a depressingly long line of abusive males King would introduce to readers": Gerald Burlingame, Joe St. George, Ed Deepneau, and Norman Daniels. Daniels is by far the most psychopathic, the most abusive, and, by the end of the novel, clearly insane.

In these recent novels, as King writes stronger and more vivid female characters, his portraits of the men in their lives slip into caricature. Norman Daniels has absolutely no redeeming qualities. King describes his sadistic abuse of his wife (and a few criminal suspects) in such stark detail that even knowing Norman was beaten and sexually abused by his own father (and his father's friends) fails to generate any sympathy for him. On the other end of the spectrum, Bill Steiner is the ideal man. As his relationship with Rose deepens, Bill does no wrong. He is always thoughtful, never less than completely understanding; he is careful to not pry, not to ask too many questions. He is too good to be true.


In all three novels [Gerald's Game, Dolores Claiborne, and Rose Madder], Stephen King examines the effects of domestic violence and, in a broad sense, patriarchy on women through the eyes of his female protagonists. However, he does not do so in a sensationalist or one-dimensional way; rather, he attempts with his realistic style to delve deeply into their individual psyches to demonstrate how the traumatic events in a woman's life can and will have lasting effects that often split, confuse, and entangle her personality in ways that can make her unrecognizable even to herself. ...

[O]ne can argue that the inclusion of the supernatural in Rose Madder detracts in some ways from the full development and believability of Rose ...

[A]fter creating such a well-developed community of women in Daughters and Sisters, King disappoints by allowing them no essential role in repelling Norman in the end. Instead, a supernatural power must intervene to rescue Rosie. Yes, a female supernatural power rescues her, but in terms of a feminist novel and King's despite to create strong, believable female characters, King thwarts his own goal and potentially disappoints his readers with the deus ex machina element of Rosie's victory.