Freedum On The March: Some US Stores Refusing To Serve Customers Wearing Masks 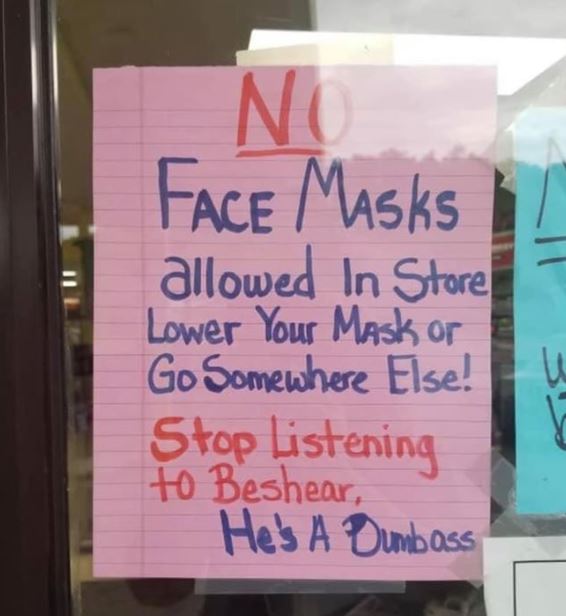 A Kentucky convenience store recently taped a sign to its front door:


NO Face Masks Allowed In Store
Lower Your Mask or Go Somewhere Else!
Stop Listening to [Kentucky governor Andy] Beshear, He's A Dumbass

A sign in a California store encourages hugs, but not masks. An employee at an Illinois gas station explains that it's hard to tell if masked customers buying booze or cigarettes are adults or children. (Isn't that why the not-exactly-new system of "carding" exists?)

Much of this idiotic behaviour stems from Donald Trump and his incessant narcissism and vanity. He  has refused to wear a mask in public since the pandemic began, saying he doesn't want to give the media the satisfaction of seeing him with a mask. He believes it emasculates him. (Or emaskulates?)

Following common sense guidelines to remain isolated during a worldwide pandemic, taking precautions to avoid contracting or spreading a highly-contagious virus for which there is no cure, a virus that has killed nearly 100,000 Americans (in fewer than three months) and more than 343,000 worldwide, seems like a smart move.

However, these measures have been likened to both slavery and being put into a concentration camp. (Yet I notice these same people didn't utter a peep when babies and young children were ripped from their parents' arms and thrown into ACTUAL concentration camps last year. In fact, a lot of those people probably cheered.) Governors encouraging their states' citizens to be safe have been described as Nazis.

How can you reason with someone who thinks not being able to get a hair cut is identical to slavery? Or who believes staying home and watching Netflix is the same as being condemned to death at Auschwitz?

You cannot. These people have cemented their minds shut. Their faith in Donald Trump's Death Cult is unshakeable.

The people who think children wearing bullet-proof backpacks to schools with metal detectors and armed guards, where they do active-shooter drills is just "the price of freedom" and the people who call having to wear a mask inside Walmart "tyranny" are the exact same people.
— Todd Hollow Man (@todd_holloman) May 20, 2020

Also, the people who think they should have the freedom to act as they please inside a business by not wearing masks are the same people who think businesses should be able to discriminate against LGBTQ people
— Chris Labarthe (@chris_labarthe) May 21, 2020

And the people who complain that they can't breath with a mask on are the same who defended waterboarding detainees, rolling coal from diesel trucks and deriding clean air regulations. 🤷‍♀️🤦‍♀️
— REFUSEE (@chariotte) May 23, 2020

In March, a Pennsylvania woman walked into a grocery store and purposefully coughed on all of the fresh produce, part of the meat section, and various bakery items. All of the food suspected of being contaminated had to be thrown out: about $35,000 worth. The woman was arrested and charged with two felony counts of terrorist threats, one felony count of threats to use a biological agent, one felony count of criminal mischief, and a pair of misdemeanors for disorderly conduct and criminal attempt to commit retail theft (she tried stealing a 12-pack of beer while being ejected from the store).

Also that month, a 50-year-old New Jersey man was arrested for allegedly coughing on a food store employee after telling her he had tested positive for coronavirus. ... Last week, a Costco employee asked a customer to wear a mask because it's company policy. The man said: I'm not doing it because I woke up in a free country."

This is a warped definition of freedom.

That is anarchy, not democracy. (Remember "You can't yell 'Fire!' in a crowded theater"?) The "demo" portion of democracy comes from demos, a Greek word meaning "the people". If you want to live in a democracy, you are obligated to think of (and work with) other people. [The US is not a democracy, of course, but the general point still holds.]

There’s a meme going around Canada 🇨🇦 asking when we’d feel safe going back to the US to visit. For some reason the overwhelming response is not now, not soon, and probably never.
— Margaret Rose (@Blackandtans) May 11, 2020

Came across this clip in @FOX9 video from Monday's protest/rally outside Shady's Tavern in Albany, MN. This is @LouRaguse, a fellow Reporter & friend trying to cover the story. And getting *harassed* for wearing a mask. A judge will decide soon whether the bar can legally re-open pic.twitter.com/iHYXUvysow
— Paul Blume (@PaulBlume_FOX9) May 22, 2020

This past week, Donald Trump – a deeply religious man, as you know – demanded that people be allowed to attend public church services, threatening to force governors to unlock church doors (though he has no power to do that). It's worth noting that several months ago, church services were an extremely common way for the virus to be spread.

A large group of people attended a funeral in Chicago, followed by a birthday party and church services. Within weeks of the February gatherings, 16 people had tested positive and three had died.

Before the first case was diagnosed in Arkansas, two people (who later tested positive) spread the virus to more than 30 others at rural church gatherings in early March. Neither of those two people had traveled outside the local area and had no known contact with any other confirmed cases. Of the 92 people known to have attended the gatherings, 35 tested positive and an additional 26 people in the community who had contact with attendees also developed COVID-19. Four people died.

A weekend revival at a Kentucky church in mid-March led to the two dozen cases of COVID-19 and at least two deaths.

In late March, a Pentecostal church in Sacramento experienced an outbreak with more than six dozen confirmed cases. Adam Bondaruk, the church's senior pastor, was hospitalized with the virus, yet maintained: "God will hear us, and he will heal us." Dr. Peter Beilenson, the Sacramento County public health director: "Obviously there is freedom of religion, but when it's impacting public health as this is, we have to enforce social distancing."

A person who tested positive the day after a Mother's Day church service exposed 180 people to the virus in Butte County, California.

In California, three pastors and a church member have brought a lawsuit against governor Gavin Newsom, claiming his stay-at-home orders are an abuse of power and deprive Californians of "fundamental rights" guaranteed by the US and state constitutions, including freedom of religion.

In February and early March, perhaps people had little idea of the existing danger in large gatherings. That is no longer the case. No one can plead ignorance now.

If these CovIdiots want to attempt suicide, that's their choice. Unfortunately, they may be risking the lives of other, more intelligent people at the same time. They should fill out and carry one of these cards: