Donald Trump spoke in the Rose Garden this afternoon. He said nothing about the situation in Minnesota and he refused to answer questions.

Earlier in the day, he did name-drop the city of "Mindianapolis". ... After babbling various lies about China, he literally turned his back on the country and walked away.

Trump just blew off what the WH has called a press conference. Clearly knew his cleanup tweet wasn’t going to fly.
— Jim Acosta (@Acosta) May 29, 2020

President Trump says nothing about Minnesota as the nation is on edge and leaves the Rose Garden without taking questions.
— Yamiche Alcindor (@Yamiche) May 29, 2020

Not one word about Minneapolis. Not one. He just walks away. This is a signal from Trump. pic.twitter.com/Asmn5ftETn
— David Corn (@DavidCornDC) May 29, 2020

Remember: Trump wants us to be outraged that he did not say anything about George Floyd, the Minneapolis protests, or the Americans dying in a pandemic. He does this on purpose. He is conveying a message to the people he considers his voters.
— David Corn (@DavidCornDC) May 29, 2020


Earlier, Trump Paused At Odd Moments Mid-Sentence, Seemed Not To Know George Floyd's Name, And Was Forced To Read Directly From His Notes When He Wanted To Act Sincere

The President announces he’s terminating the relationship with the WHO pic.twitter.com/FDLwv9VVE9
— Acyn Torabi (@Acyn) May 29, 2020

He forgot who he was talking about. Twice. Had to read it off the paper. #GeorgeFloyd
— WaterBluSky (@MsMariaT) May 29, 2020

Question: How would you know that phrase and not know its racially charged history?
Trump: Well I’ve heard that phrase for a long time. I don’t know where it came from. pic.twitter.com/tXcgduNl4I
— Acyn Torabi (@Acyn) May 29, 2020

Trump denied knowing the origins of the phrase “when the looting starts, the shooting starts” saying he has heard the phrase “for a long time.”
When a reporter noted it was said by Miami police chief in 1967, Trump said he “has also heard from many other places.”@JasonHoffman93
— Manu Raju (@mkraju) May 29, 2020

Trump: Well I think police brutality is certainly something we’ve been hearing about, reading about, studying about, I have for many years pic.twitter.com/e0u9b8ORWm
— Acyn Torabi (@Acyn) May 29, 2020

Question: Does that change your views on the NFL protests on this issue? They were peaceful protests.
Trump: pic.twitter.com/tRI7NqgweV
— Acyn Torabi (@Acyn) May 29, 2020

All The Best Words

The owner of a Minneapolis nightclub where Derek Chauvin worked security tells CNN that Chauvin acted more aggressively when the club had urban nights with predominantly black customers. pic.twitter.com/lUr0rMUFn2
— Keith Boykin (@keithboykin) May 29, 2020

Minneapolis: We can't arrest the police officer who killed George Floyd on video without doing more investigation; but we can arrest a Black CNN journalist live on TV for reporting about our failure to do just that.
— Rebecca Kavanagh (@DrRJKavanagh) May 29, 2020 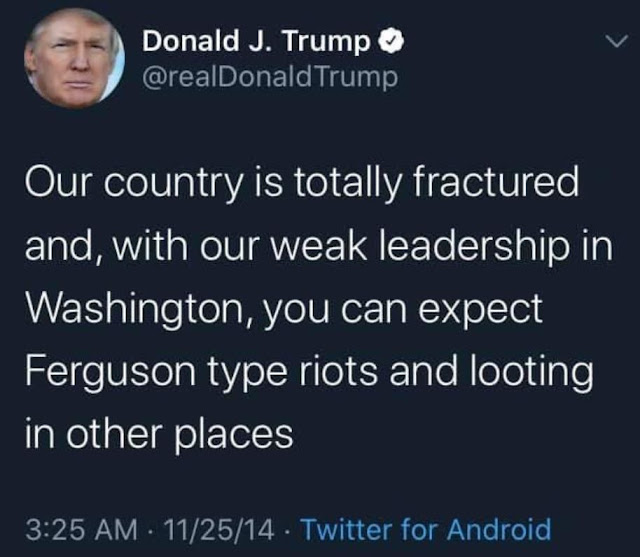 Our country is totally fractured and, with our weak leadership in Washington, you can expect Ferguson type riots and looting in other places
— Donald J. Trump (@realDonaldTrump) November 25, 2014