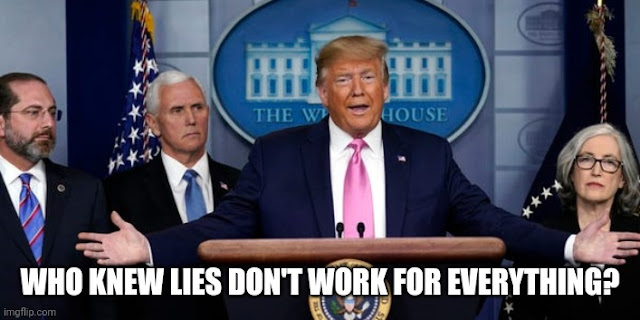 But First, A Few Words From The Bright Bulb Who Believes Trump Has Never Lied And Insisted The Coronavirus Would Not Dare Show Its Invisible Face In The United States Because Tough-Talkin' Sheriff Trump Was In Town (And Not That Loser Obama)

"I will never lie to you. You have my word on that." -- Kayleigh McEnany during her first press briefing as press secretary (bookmark this) pic.twitter.com/PqUhRAWiun
— Aaron Rupar (@atrupar) May 1, 2020

Many people are saying that this isn't going to age very well, believe me!
— Trumpy Trumpy (parody) (@outofcontroljb) May 1, 2020

Kayleigh McEnany promises not to lie. And that, folks, is her first lie at the podium.
pic.twitter.com/3HLk9NJARu
— Publius (@ThePubliusUSA) May 1, 2020

MeEnany just lied again. She misquoted the FBI notes that Trump is hyping (misleadingly) as bombshell evidence exonerating Michael Flynn. Compare what she said with what the note actually says: https://t.co/fwS2XHsXjy pic.twitter.com/iuOPZuhLl9
— Aaron Rupar (@atrupar) May 1, 2020

McEnany's rationale for why Trump's denials of sexual assault are more convincing than Biden's is that "the president has swiftly denied all of these allegations that were raised four years ago. He's always told the truth on these issues." pic.twitter.com/dKKcmmEDpE
— Aaron Rupar (@atrupar) May 1, 2020

When asked about Trump’s own sexual assault allegations, Kayleigh McEnany said that those were “asked and answered” by a vote from the American people.

On the Wuhan lab conspiracy, new WH Press Secy says "intelligence is just an estimate" and it's up to the President to decide what it means. (Explains that President says what intel means even though actual intel seems to say no evidence.) pic.twitter.com/3aMEQ7iJUw
— Josh Marshall (@joshtpm) May 1, 2020

McEnany lies again to close the briefing about what the Michael Flynn FBI notes say. They don't not indicate that agents tried to get him to lie during an interview. pic.twitter.com/5HEdeeNbxn
— Aaron Rupar (@atrupar) May 1, 2020

I was on CNN with Kayleigh McEnany after the 2017 Women’s March. In the elevator after our segment, she smiled as she told me how easy it is to profit from being a pretty woman willing to support Trump on TV. Now she’s his press secretary. I suppose it was only a matter of time.
— Lauren Duca (@laurenduca) April 15, 2020


Dear Leader Snaps Off A Couple Of Lies And He's Off


Isn't Threatening The Lives Of Elected Government Officials Frowned Upon, You Know, Law-Wise? ... I Guess Not. ... Good To Know That Storming Into The White House Fully-Armed With Automatic Weapons And Threatening Trump's Life Is Now Completely Acceptable!

The president is praising literal terrorists who have threatened the lives of duly elected leaders.
— john r stanton (@dcbigjohn) May 1, 2020