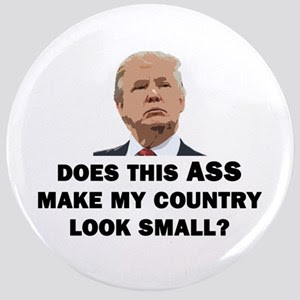 The "In His, Shall We Say, Weight Group, 'Morbidly Obese', They Say" Edition

What I really like about this is that Trump was shrieking on twitter earlier today that "I AM NOT IMPULSIVE" in response to a WSJ editorial that suggested he might be impulsive.
— Dan Murphy (@bungdan) May 19, 2020

Trump searches for specific videos he wants to share & mashes the RT button for ones at top of the search results without looking into accounts he's amplifying or, in this case, even reading the tweet properly. He's retweeted me 3 times. This isn't exactly the Manhattan Project. https://t.co/HDwmId2qYl
— Aaron Rupar (@atrupar) May 19, 2020


And Now, Some Words From The Very Stable Genius

Wow! The Front Page @washingtonpost Headline reads, “A BOOST IN TESTS, BUT LACK OF TAKERS.” We have done a great job on Ventilators, Testing, and everything else. Were left little by Obama. Over 11 million tests, and going up fast. More than all countries in the world, combined.
— Donald J. Trump (@realDonaldTrump) May 18, 2020


Quick Break For Facts: As you can see below, you only have to combine the next three countries (#2-#3-#4) to have more tests than the United States.

Of the 215 countries, territories, etc. listed at Worldometers, 189 have submitted test totals. I added up those numbers tonight and there have been 61,141,742 tests worldwide.
It's not surprising that Trump sees the test totals as a game in which his country is winning, but this particular lie is a real whopper.

The US accounts for 1 out of every 5 tests worldwide, ranking 39th in Tests/1M Population.

The US is far closer to having more deaths than the rest of the world combined than it is tests.


The Wall Street Journal Editorial states that it doesn’t want me to act in an “impulsive” manner in Afghanistan. Could somebody please explain to them that we have been there for 19 years, and while soldier counts are way down now, hardly impulsive. Besides, the Taliban is.....
— Donald J. Trump (@realDonaldTrump) May 18, 2020

.....mixed about even wanting us to get out. They make a fortune $$$ by having us stay, and except at the beginning, we never really fought to win. We are more of a police force than the mighty military that we are, especially now as rebuilt. No, I am not acting impulsively!
— Donald J. Trump (@realDonaldTrump) May 18, 2020

So the so-called HHS Whistleblower was against HYDROXYCHLOROQUINE. Then why did he make, and sign, an emergency use authorization? @NorahODonnell said, “He shared his concerns with a reporter.” In other words, he LEAKED. A dumb @60Minutes hit job on a grandstanding Never Trumper!
— Donald J. Trump (@realDonaldTrump) May 18, 2020

Trump May Be Rage-Tweeting Throughout The Night