Only one of the 102 tracks has been previously released. In addition to dozens of unreleased live performances and studio outtakes, the set features 14 songs which have never appeared on any Dylan album in any form. 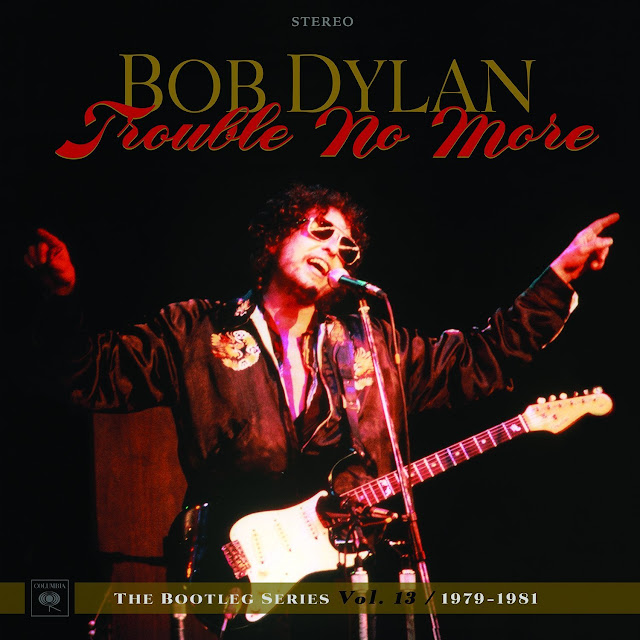 
As the 1970s ended and the 1980s began, Dylan responded to the changing of the decades with a three album trilogy – Slow Train Coming (1979), Saved (1980) and Shot of Love (1981) – of spirit-filled songs of praise, worship and devotion. These songs were as deeply personal and packed with poetics as any Dylan had ever written, but the force of conviction and power of faith evident in these performances baffled segments of Dylan's fanbase (just as Dylan's "going electric" had alienated folk purists in 1965).

I have been fascinated by this short, much-maligned period of Dylan's career for many years. This was a time when Dylan appeared to be performing with a minimum of masks, when he perhaps allowed more of his true self to be seen than at any other. And he was serious. During three short tours in late 1979 and early 1980, Dylan performed only his new religious material; everything else he had written was ignored. He also preached to the audience, sometimes talking for close to ten minutes about world events (especially in Russia and the Middle East), what form the anti-Christ might take, and the coming Battle of Armageddon.


Also available in November: Clinton Heylin's Trouble In Mind: Bob Dylan's Gospel Years - What Really Happened, described as "the first book to focus on the life and works of Dylan as a born-again Christian from the perspective of both his artistic growth and the development of his eschatological worldview. It will draw on previously undocumented song drafts, rehearsal tapes, and new interviews with engineers, musicians, and girlfriends."

Rolling Stone calls this period "an intense, wildly controversial time that produced three albums and some of the most compelling and confrontational concerts of [Dylan's] long career".


Most [of the 14 unreleased songs from the era] have circulated in fan communities, but "Making a Liar Out of Me" has never been heard anywhere. "It wasn't even known to exist until we started going through the tapes," says the source. "Others were just played a few times on concert. We were able to go to the original sources for everything, even if it's just a cassette source. It's all going to sound better than anyone has ever heard before. ...

None of [Dylan's sermons] will be included on the set. "You had to be there at the time for those things to really work," says the Dylan source. "We wanted to find something that would be a little more dynamic." Heylin, who quotes Dylan's sermons at length in his book, is disappointed by the decision to leave them off the set. "It does slightly dull the edge," he says. "I do think that there was an element of power, particularly in the live performances, that comes from some of the things that Dylan was saying between the songs. This does tone down some of the seriously apocalyptic nature of Dylan's performances and some of the things he was writing. I guess that's understandable in 2017." ...

The deluxe edition of Trouble No More opens with two discs of live material culled from every leg of the gospel tour. They had a breadth of material to draw from since an Otari MX-5050 captured every night of the tour. The tapes are two-track, but the sound quality is extremely high, far better than the many bootlegs from the time that exist. 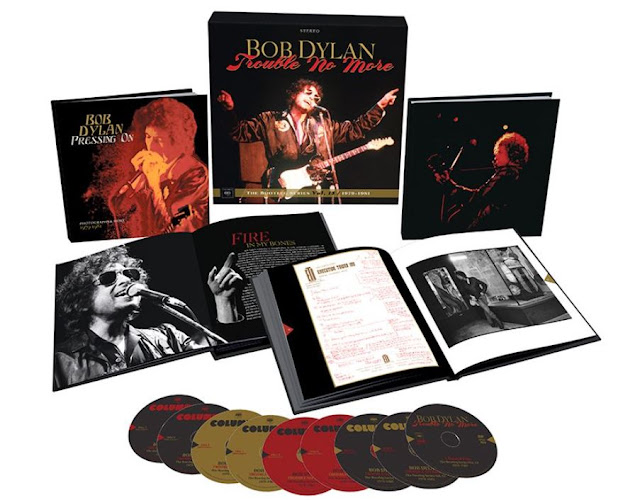 [Dylan played Ain't No Man Righteous, No Not One only three times; this is the first.]

[The first two songs were played at the end of Dylan's Street Legal tour. On Slow Train Coming, Dylan sings When He Returns accompanied by only a piano. He recorded a full-band version and I hope that is what's included here.]

[An incomplete version of Yonder Comes Sin circulates. Maybe this is the full song. The lyrics to Ain't Gonna Go to Hell for Anybody in December 1980 are completely different from (and far more complex than) the April 1980 version. Maybe we'll be able to decipher the words in the second version with a high-quality recording. And while Caribbean Wind is here, it is (inexplicably) not the live version (the only time Dylan played it - a version many fans find superior to the several studio attempts that have been bootlegged).]

[Dylan began re-introducing his other songs into his sets in late 1980.]

The DVD is not of a full concert, as many fans hoped, but "a new feature-length cinematic presentation combining unreleased footage from Dylan's 1980 tours". Variety notes that about three-fourths of the film consists of concert footage. (Dylan's show in Toronto on April 20, 1980 was professionally filmed and bootleg copies have circulated for years. It is essential viewing. Four songs from that show are included on Discs 5 and 6, including Dylan playing piano on a stunning "When He Returns".)

AND ....... If you order the deluxe box set from Dylan's official website, you will also get a bonus two-disc set of the complete show from November 28, 1979 in San Diego. (Only half of that show circulates as a bootleg.)
Posted by allan at 10:55 AM 1 comment:

It's been roughly nine months since my last post, but I will be posting again soon.