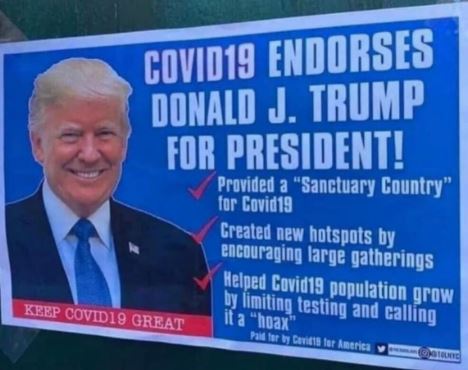 The "Move Over, Chaucer" Edition


"I want to get our country back to normal. I want to normalize." -- Asked if he'll follow Ford's policy and wear a mask during his visit to a plant in Michigan, Trump indicates he doesn't want to pic.twitter.com/XJ3CfqTxEF
— Aaron Rupar (@atrupar) May 21, 2020

"We don't want anyone to do mail-in ballots" -- Trump (reminder: the only example of mail-in fraud Trump has been able to cite is a "pants on fire" lie https://t.co/VHNbCfjixp) pic.twitter.com/iIfDwsFhjj
— Aaron Rupar (@atrupar) May 21, 2020

Trump campaign email yesterday to PA supporters: “Request your ballot and cast your vote from your own home.”https://t.co/GJ4YjuUMrq
— Matea Gold (@mateagold) May 21, 2020

TRUMP: "I was so early. I was earlier than anybody thought... Columbia is an institution that is very liberal" pic.twitter.com/avLKBZLNGc
— Aaron Rupar (@atrupar) May 21, 2020

Despite reports to the contrary, Sweden is paying heavily for its decision not to lockdown. As of today, 2462 people have died there, a much higher number than the neighboring countries of Norway (207), Finland (206) or Denmark (443). The United States made the correct decision!
— Donald J. Trump (@realDonaldTrump) April 30, 2020

Trump has jokes about blasting reporters into space pic.twitter.com/qPyladWDh5
— Aaron Rupar (@atrupar) May 21, 2020

It was a yes or no question. He only had two answers, and he couldn't even do THAT right. #DementiaDonald
— Barack Obama lives in Hugh Laurie! (@googamp32) May 21, 2020

He cannot say he's anything but perfect. Even testing negative is akin to being imperfect to him. It's anathema.
— Shannon *WASH YOUR HANDS* (@jodfoster) May 21, 2020


"He Rarely, If Ever, Reads Intelligence Reports, Relying On Friends For Information"


“While Trump doesn’t appear to read the intel reports he is given, he will examine graphs & tables. Satellite pictures clearly interest him, too: He tweeted one from his intel brief, revealing capabilities of some of the govt’s most classified spy assets” https://t.co/nq4laBVs70
— Aaron Rupar (@atrupar) May 21, 2020

The ability to absorb and process information is basically the definition of intelligence. So what they are saying is consultants have been hired to try and teach smart people how to communicate with a stupid person. Well done, Republicans. https://t.co/tV9KQd0uei
— stuart stevens (@stuartpstevens) May 21, 2020

"Trump veers off on tangents and getting him back on topic is difficult...He has a short attention span and rarely, if ever, reads intelligence reports, relying on conservative media and friends for information."

It’s a little buried, but the article points out Trump relies on gossip from mafia linked serial rapist Steve Wynn instead of intelligence or military assessments https://t.co/a9YOkRzijo @RalstonReports
— Erik Halvorsen (@erikhalvorsen18) May 21, 2020


Karl Rove is a total loser. Money given to him might as well be thrown down the drain.
— Donald J. Trump (@realDonaldTrump) February 7, 2013

Karl Rove’s strategy and commercials were the worst I have ever seen.
— Donald J. Trump (@realDonaldTrump) February 7, 2013

Why are people giving money to Karl Rove when he just wasted $400M without any victories? Use your head.
— Donald J. Trump (@realDonaldTrump) February 7, 2013


16 years ago today, Donald Trump gave one of the most inspiring commencement speeches ever. pic.twitter.com/wj97qQ4T4N
— The Daily Show (@TheDailyShow) May 21, 2020

Dana Perino wanted proof that Trump has lied (lol) about the coronavirus. @SymoneDSanders had receipts. pic.twitter.com/po4igpWOQy
— Aaron Rupar (@atrupar) May 21, 2020

I love how Trump gets to say the country is opening ahead of schedule when 2 months ago he said the country would be open on Easter
— Sarah Cooper (@sarahcpr) May 20, 2020