Does Steve Mnuchin Know Where He Is? He's In The Twitter Jungle, Baby!

Steven Mnuchin has a lot of free time at work.

The US Secretary of the Treasury was undoubtedly very pleased with himself, thinking he had dunked on Axl Rose by questioned the singer's patriotism and capping his tweet with an emoji of the US flag.

(Note that Axl did not tag Mnuchin in his tweet and included no hashtags. Which means Mnuchin is searching for his name on Twitter and scrolling through the results looking for random people he thinks need some comeuppance. Your tax dollars at work!)

Mnuchin failed to notice that he included an emoji of the flag of Liberia in his tweet.

He deleted the tweet and tried again, this time succeeding in adding the correct flag. I don't know how long the first tweet lasted, but it was enough to be saved and shared. 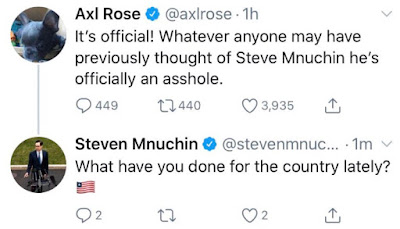 It's not only America. Axl Rose has also done more for Chinese democracy than Steve Mnuchin.
— Charlotte Clymer 🏳️‍🌈 (@cmclymer) May 7, 2020

The many replies to Mnuchin's question are also fun.


Didn't charge taxpayers when he and his trophy wife flew out to see the eclipse.

Axl Rose didn't seek to use a $25,000/hour government jet for his honeymoon.

He didn't delay coronavirus economic recovery checks so Trump could get his name on them.

Well he hasn't used the US Treasury as his personal piggy bank.

Well, a couple of hours ago he accurately described the Secretary of the Treasury.

I've never read that Axl Rose stayed in a luxury suite for 137 consecutive nights in 2017 at Trump's D.C. hotel, thereby forcing the Secret Service to pay Trump more than $33,000 of our tax dollars for a room so that agents could protect your sorry ass.

At least he didn't team up with a D-list con man from Queens and try to scam a whole country of taxpayers into thinking he was some kind hero for taking all their money, then expecting them to feel grateful that he'd left them the lint in their pockets as he swiped it.

My point is this: Mnuchin is a piece of shit as a human being.

Exhibit A: In 2016, Mnuchin fought to foreclose on a 90-year-old woman's house over 27 cents. After some confusion about what her insurance payment should be, Ossie Lofton owed the bank 30 cents and mistakenly mailed the bank a check for only 3 cents.
Posted by allan at 9:41 PM