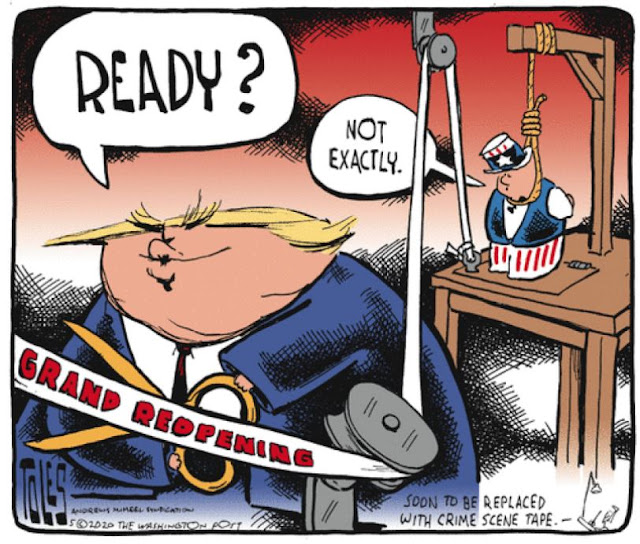 Once Someone Is Unable To Differentiate Reality From The Fantasies Playing In His Head, How Much More Insane Can He Get?

That's 241 times in less than four days. During that same time period, more than 4,750 Americans died of Covid-19.

Jared Kushner assures everyone that President Trump is in the Oval Office "working late" pic.twitter.com/4gfPOp5Rr3
— Jason Campbell (@JasonSCampbell) May 12, 2020

Trump 'began his Tuesday morning of tweets by proclaiming that “OBAMAGATE makes Watergate look small time!” — never mind that he can’t even explain what “Obamagate” is.'
Describing Trump as 'unhinged' is an understatement..
— AlyceAndersyn (@AlyceAndersyn) May 12, 2020

Time was the president of the United States baselessly accusing a prominent journalist of murder would be a major news story instead of just Tuesday. The degree of national degradation we've experienced in three and a half years is unfathomable. https://t.co/xST9k6UXBh
— Michelle Goldberg (@michelleinbklyn) May 12, 2020

And remember: when he accuses someone else of doing something awful, it's usually to obscure that fact that he himself did the awful thing. Maybe NYPD homicide should take another look at their cold case files.
— Devilish Ledoux (@Devilishlydo) May 12, 2020

He exists in a criminal realm, and has undoubtedly known people who have murdered others. He seems crime everywhere because for trump, crime is normal. Trump has no idea how insane he sounds to the rest of civilized people.
— Lisa McGovern (@vodkanotgulags) May 12, 2020

“Since writing ‘HAPPY MOTHER’S DAY’ at 8:10 a.m. on Sunday, Trump has used his Twitter account to make or elevate allegations of criminal conduct against no less than 20 individuals and organizations.” 😳 https://t.co/1hrUjCP7g0
— Aaron Rupar (@atrupar) May 12, 2020


Twitter announced Monday it will start alerting users when a tweet makes disputed or misleading claims about the coronavirus. https://t.co/IIorCEMghz
— Peter Roman (@TsarKastik) May 11, 2020


The article states: "Twitter has not added any warning labels to politicians' tweets that violate its policies but are deemed in the 'public interest' under a policy the company announced in June 2019."

What Trump Is Really Concerned About


Nearly all legal experts agree that the technical matters presented in the #TrumpTaxReturns cases tomorrow are open-and-shut issues. If ever there was a case demanding an emphatic 9-to-0 decision this is it.https://t.co/r2lwqDlQC3
— Bill Pascrell, Jr. (@BillPascrell) May 11, 2020

#TrumpTaxReturns
I taught him about misdirection when he was young and I wasn't dead.
He isn't very smart but he did learn that lesson pretty well.
When he cries "Obamagate" he means, "Don't look at the evidence which shows that I've been a criminal for about 40 years "
— Fred C. Trump (@DonIAmYrFather) May 12, 2020

Can any lawyer explain to me how scotus could unanimously say Clinton had to testify in a civil case forced by subpoena and Trump doesn’t have to respond to a subpoena that requires him to do nothing?
— Joe Lockhart (@joelockhart) May 12, 2020

BREAKING: Jay Sekulow Tells SCOTUS That Trump Has Zero Time During a Pandemic to Talk About Lawsuits...

Here's a photo of Trump concentrating on the pandemic response... pic.twitter.com/Hww223KJkW
— Albert Ramsey (@albertcramsey) May 12, 2020

- Main argument by Trump's lawyers today: Trump is way, WAY too busy for some entity (not Trump himself!) to comply with subpoenas about him & let him know about it.

Why is Donald Trump afraid to release his tax returns? If his supporters don't care that he's a racist, a misogynist, a rapist, a vulgarian, a liar, and a traitor, why would they care that he's a tax cheat? #TrumpTaxReturns
— Middle Age Riot (@middleageriot) May 12, 2020

Nobody even blinks an eye at the fact the president seems to have been apprised of the details of a DOJ investigation by the AG. https://t.co/uRUGbednV9
— digby (@digby56) May 12, 2020


Is the president above the law?

That's what the Supreme Court will decide: Is the United States officially a dictatorship?

OBAMAGATE Makes Watergate Look Small Time! It's The Biggest Political Crime In American History, By Far!. . .
Holy Shit, This Is Huge! What Did Obama Do?


Reporter: "What is the crime exactly that you're accusing [President Obama] of?"

President Trump: "You know what the crime. The crime is very obvious to everybody. All you have to do is read the newspapers, except yours." pic.twitter.com/vpvy2VlKqc
— The Hill (@thehill) May 11, 2020

.@PhilipRucker asks what crime he's accusing Obama of committing and does he think he should be prosecuted. "You'll be seeing what's going on over the coming weeks," Trump says, but won't say what the crime is. "You know what the crime is," he says. Moves on.
— Maggie Haberman (@maggieNYT) May 11, 2020

Asked what crime he is accusing Obama of committing, Trump says, "Obamagate!" "Some terrible things happened." "And you'll be seeing what's going on." "You know what the crime is. The crime is very obvious to everybody."
— Daniel Dale (@ddale8) May 11, 2020

And in the course of investigating found a bunch of people committing various crimes and/or welcoming the interference.

Trump has spent all the years since trying to obscure this through any means possible; this was at the root of the Ukraine scandal that got him impeached,
— Jacob T. Levy (@jtlevy) May 11, 2020


Right-wingers' obsession and hatred of Obama is both bizarre and laughable, because the 44th president was a more rabid neo-con than Dick Cheney. He successfully completed W's third and fourth terms. I have to assume at least a few Republicans understand he was their fantasy president. He appealed to the left and got them to stop protesting wars of empire and rampant torture while also taking extreme right-wing policies to the next level. The incessant frothing at the mouth over Obama shows, more than anything, that what is publicly shown of US politics is merely theater. Every drama has to have a villain and they can go overboard like they do because this villain is also black. (Of course, Trump has no clue about this. He thinks it's all real and if he believes he's the Chosen One, then Obama must be the Devil.)


On the episode of Fox News's "The Five" that is going on right now, "Obama" has been mentioned 17 times. The entire first segment of the show was devoted to "Obamagate."

"Coronavirus" has been mentioned twice. pic.twitter.com/9ZQDgi3xmN
— Aaron Rupar (@atrupar) May 12, 2020

Has anyone from "The Five" asked Trump what crimes were committed in "Obamagate"? Do they know?
Or is this the angry girlfriend, "you know what you did!", thing?
— Troy Martez (@TricksterAtHome) May 12, 2020

Fox translation: No radical muslim Kenyan without a valid US birth certificate should be allowed to be briefed on his own plot to overthrow his successor!
— KWK (@kwillkat4321) May 12, 2020

The man said he was treated worse than a President, who was assassinated. Don't hold your breath for it to get better.
— laura frost (@Ljafk) May 12, 2020


It's been 111 days since the first case of the coronavirus was reported in the United States. The Trump administration still has no plan for dealing with any aspect of this global pandemic. (Trump, May 8, 2020: "This is going to go away without a vaccine. It's going to go away, and we're not going to see it again.")

More than 33 million Americans are out of work -- 1 out of every 6 workers. The Trump administration has no plan for fixing the worst economy since the Great Depression (beyond tax cuts for the mega-wealthy. (And the Democrats are marching in lockstep.)

Trump was given explicit instructions on exactly what to do during a pandemic. Unfortunately for 350,000,000 Americans, those instructions came from a man with dark skin, so Trump purposefully ignored them:


We literally left them a 69-page Pandemic Playbook.... that they ignored

And an office called the Pandemic Preparedness Office... that they abolished.

Additional relevant information: In addition to the 69-page playbook, the Trump transition and Obama administration ran an exercise to get the new team up to speed. The topic: a pandemic. There wasn't just a playbook. There was a scrimmage. https://t.co/oKqHtfhShe https://t.co/axijJldmPb
— John Dickerson (@jdickerson) May 12, 2020

Yes, and then, people have tweeted at me, "Oh sure, maybe the Obama Admin left a Pandemic Playbook, but was it specific about this kind of virus?"


Dr. Anthony Fauci tells senators: My concern is that if states, cities or regions disregard our guidelines and reopen too soon, "there is a real risk that you will trigger an outbreak that you may not be able to control." pic.twitter.com/lNSKqWkYsu
— PBS NewsHour (@NewsHour) May 12, 2020

Sen. Warren: "Do we have the coronavirus contained?"

Dr. Fauci: "It depends on what you mean by containment. If you think we have it completely under control, we don't." pic.twitter.com/RcOmXgG10r
— MSNBC (@MSNBC) May 12, 2020

FAUCI on meat packing plants: "I would think when you are calling upon people to perform essential services, you really have almost the moral responsibility to make sure they're well taken care of & well protected ... that's just me speaking as a physician and as a human being." pic.twitter.com/AFIGyC9yDw
— Aaron Rupar (@atrupar) May 12, 2020


Trump, March 29, 2020: "Nothing would be worse than declaring victory before the victory is won."


.@weijia: Fauci stressed today that reopening prematurely could turn back the clock. Why isn't Trump encouraging states to follow the federal guidelines?

McENANY: "We do want to reopen this country because there are consequences that run the other way when we stay closed down." pic.twitter.com/jjGIuTakzE
— Aaron Rupar (@atrupar) May 12, 2020

"There are consequences to eternally staying shut down," McEnany says, setting up a strawman. (Nobody believes it's sustainable to be shut down for forever, but it would be wise to wait until new per-day cases are going down.) pic.twitter.com/vxeGlhasG5
— Aaron Rupar (@atrupar) May 12, 2020

Does McEnany ... does she realize she's a government spokesperson? pic.twitter.com/YdZTWLLcQp
— Aaron Rupar (@atrupar) May 12, 2020

McEnany takes a softball Q from ultra-sycophantic One American News Network. She uses it to make dark insinuations about Obama officials conspiring against Trump & goes on to mischaracterize the Mueller report, which did not in fact exonerate Trump.


There are only two choices, apparently. Getting everything back to how it was as soon as possible or shut everything down for eternity. Nothing in the middle.

Trump used the same false equivalence a few days ago, stating the US must get back to business because the country can't stay closed for the next five years. Why five years? Who knows?


They found six new cases in Wuhan so they’re planning to test eleven million people over the next ten days. Neither number is a typo. https://t.co/X7NKtxUh52
— zeynep tufekci (@zeynep) May 12, 2020


I Didn't Need To Know Bryan Adams Is Proudly Blasting His Racism To The World, But . . .


Canadian singer Bryan Adams is under fire for an Instagram post in which he blasted 'bat eating, wet market animal selling, virus making greedy bastards' for putting the world on hold, including some concerts he had booked in the U.K. https://t.co/Tb5hae4GdA
— CBC News Alerts (@CBCAlerts) May 12, 2020