When it comes to screwing over working-class Americans, Donald Trump and Nancy Pelosi are inseparable.

They may act like enemies in public, but the two US political parties are busy working together behind the curtain towards a common goal. They are both eager to exploit the current pandemic and funnel billions of dollars to wealthy corporations (who, as their biggest donors, enable them to run for office) rather than use that money (which comes from Americans paying taxes) to help suffering Americans.

The US economy lost 20.5 million jobs in April. The unemployment rate stands at 14.7%, the worst since the Great Depression (when it reached 24.9% in 1933). The speed and magnitude of the modern job losses are unprecedented in American history. And things were bleak for the working class before the pandemic:

45% of American workers have no money in a savings account

More than 33 million Americans — roughly 1 out of every 6 workers — have filed for unemployment benefits in the past two months. Many of those people are not receiving what they should. In March, 71% of jobless Americans who had filed did not receive any benefits.

Trump abandoned the individual states when they begged the federal government to send essential, life-saving medical equipment as the virus rapidly spread. Now, the Democrats and Republicans have joined forces (yet again) to abandon the vast majority of Americans when they are begging for life-savings assistance. 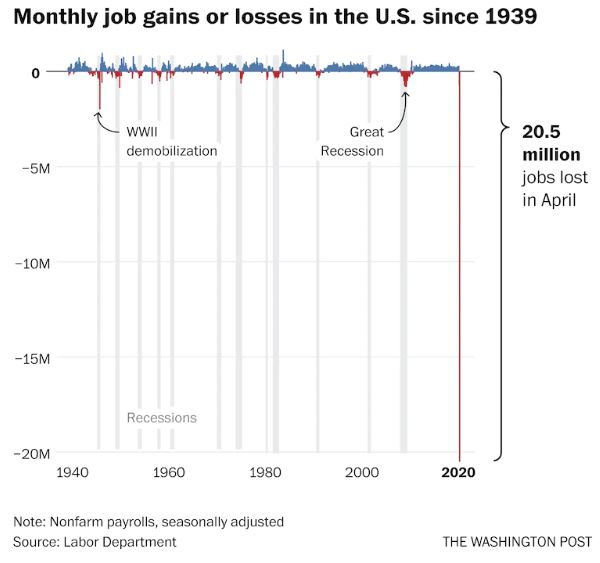 
House Democrats on Tuesday unveiled a sprawling 1,815-page, $3 trillion coronavirus relief package that spurns many of the key demands of progressive activists and lawmakers while including proposals that immediately provoked backlash, such as a tax cut for the wealthy and a provision that would allow corporate lobbying organizations to take part in federal small business loan program.

Formally titled the Health and Economic Recovery Omnibus Emergency Solutions (HEROES) Act, the bill (pdf) would provide $1 trillion in additional funding for state and local governments, extend beefed-up unemployment benefits through January of next year, authorize an additional round of one-time $1,200 stimulus payments for adults earning up to $75,000 per year, expand federal nutrition benefits, provide $25 billion for the U.S. Postal Service, establish a hazard pay fund for frontline workers, and increase spending on Covid-19 testing. ...

The bill, which the House is expected to vote on as early as Friday, does not contain recurring direct cash payments, a paycheck guarantee, cancellation of rent and mortgage payments, or expansion of Medicare to cover the rapidly growing number of unemployed and uninsured Americans.

The legislation does, however, propose an expansion of Paycheck Protection Program (PPP) eligibility to include corporate lobbying organizations—which aggressively pushed for the change—and a bailout for landlords.

"Democratic leadership has had plenty of input from progressive thinkers over the past couple of months. They just care more about the input from corporate lobbyists," tweeted HuffPost senior reporter Zach Carter. "There is just no excuse for this."

Progressives have vocally criticized the COBRA proposal as a mere subsidy to the private insurance industry that would not be nearly as beneficial or cost-effective as the emergency Medicare expansion proposed by Sen. Bernie Sanders (I-Vt.) and Rep. Pramila Jayapal (D-Wash.).

Jayapal, co-chair of the Congressional Progressive Caucus, pushed hard for the inclusion of her Paycheck Guarantee Act but was rebuffed by House Speaker Nancy Pelosi (D-Calif.), who has wielded near-unilateral authority over the negotiating process as lawmakers remain in their home districts due to Covid-19 fears.

As an alternative to Jayapal's ambitious paycheck guarantee proposal, which would have provided companies with direct payroll grants to keep workers employed, the newly unveiled legislation proposes an expansion of the Employee Retention Tax Credit.

More than 30 million Americans are suddenly unemployed—without a paycheck today and without health care tomorrow. This is an unprecedented crisis. It is no time for half measures or further delay.

Even as the legislation fails to meet demands that progressives characterized as basic steps toward ensuring economic security and public health, the House Democratic leadership has signaled that they're willing to negotiate down even further as talks over the stimulus package continue. ...

Freelance journalist Jon Walker called the HEROES Act "deeply depressing," particularly as an opening bid in negotiations with the Republican-controlled Senate and the Trump White House. "It is too small even if it passed as is," Walker tweeted. "As a starting point for negotiation it is going to be a disaster." ...


Climate action advocacy groups on Tuesday blasted Democratic congressional leadership for introducing a 1,815-page, $3 trillion coronavirus relief package that fails to close loopholes for fossil fuel corporations that are lobbying for federal bailouts under the cover of the pandemic.

Activists expressed frustration that House Democrats' Health and Economic Recovery Omnibus Emergency Solutions (HEROES) Act does not include provisions from the recently introduced Resources for Workforce Investments, not Drilling (ReWIND) Act that would prevent the Trump administration using Covid-19 relief funding to bail out the oil and gas industry.

Greenpeace USA senior climate campaigner John Noël said in a statement Tuesday that the HEROES Act neither closes fossil fuel industry loopholes from Congress' last coronavirus package—enacted in March—nor provides "the certainty that all relief will be steered to the front lines of the crisis and not to failing oil companies with direct access to the president."

"Oil and gas lobbyists have thrown the book at Congress asking for tax breaks, additional subsidies, and loans," he added. "Congress needs to shut the door in their faces and focus on providing relief directly to people in the crosshairs of this crisis." ...

The outrage extended to [Food & Water Action policy director Mitch] Jones, who said in a statement that "the idea of bailing out the oil and gas industry by filling the Strategic Petroleum Reserve would be laughable if it were not so serious. The flailing oil and gas industry built its boom cycle on epic overproduction, flooding the world in a glut of oil at the exact time we need to be dramatically reducing extraction of all fossil fuels."

Like Greenpeace, Food & Water Action responded to the HEROES Act with disappointment, declaring on Twitter that "the bill falls far short of our expectations" for failing to block fossil fuel bailouts.

"We should not be bailing out the oil and gas industry—we should be buying it out by taking public control of assets and managing a fair and just transition for workers and front-line communities," said Jones. "Doing otherwise is irresponsible, and shows a lack of real understanding of the climate crisis." ...

If Only The US Had That $6.4 Trillion It Wasted On Iraq And Afghanistan Wars To Fight Covid-19 Pandemic
Juan Cole, Informed Consent, May 11, 2020


Wouldn't it be nice if the richest country in the world had some resources stored up to deal with the worst economic crisis since the Great Depression and the worst health crisis since the 1918 Influenza Pandemic that killed 600,000 Americans? I mean, we had a $21 trillion a year economy.

George W. Bush and his administration squandered $6.4 trillion on the Iraq and Afghanistan wars. With regard to Iraq, that was a war of choice. Iraq had not attacked the United States. ... Bush just didn't like the looks of Iraq and decided to whack it.

The US was in a rare moment of global ascendancy. ... The US could have wound down its arms industries, slashed the Pentagon budget, and invested in science and technology and educating the American public in creativity and critical thinking. ...

And then Bush pissed it all away. He actually borrowed a lot of the money for his wars, so you and I had to pay interest on their costs. It was sort of like being forced to buy a burned out building and pay interest on the mortgage for the rest of your life. ...

We was had. The September 11, 2001 attacks on New York and Washington, DC, took a high toll in innocent American lives. ... Putting in locks on the doors of jetliner cockpits and implementing some basic security measures ... was mostly what you needed to do. ...

Bush first said he wanted to attack Iraq because it was close to having a nuclear weapon. This was a damned lie. Iraq did not even have an active nuclear research program, and UN inspectors who had been on the ground there until 1998 so attested. Then after Bush invaded Iraq and it became clear that the country had no chemical, biological or nuclear weapons or even programs, he started saying he invaded the country to impose democracy. But then he said he did not want one person, one vote elections there, which made you kind of skeptical about that democracy business – along with the fact that he hadn't ever mentioned liking democracy before. ...

So you would think that since the Republican Party had brought you two unwinnable wars and an epochal financial collapse that no one would ever vote for it again. But no, the American people looked high and low and found someone even worse at managing affairs than Bush had been (and boy was that hard).

And so now the coronavirus pandemic has hit, and Trump had fired some of the people who would ordinarily have been on the lookout for such a crisis. And in January when a US manufacturer came to him and said he could ramp up to produce millions of needed P95 masks, Trump blew him off. ...

[The] $6.4 trillion is gone up in smoke in Mesopotamia and Central Asia. Did you see any benefit of it? I certainly did not. ...

[T]he big threat to the United States, both with regard to loss of life and economic harm was lurking in bats or pangolins in East Asia. What you would have needed to be prepared for it was a health and university and scientific research budget instead of a Pentagon budget. The United States has been hollowed out by the war corporations and the fossil fuel corporations and other useless industries that don't even supply many manufacturing jobs. They've made the US government their piggy bank. ...

Bush once said he envied the grunts he sent to Afghanistan because of the "romance" of it all. We've had quite enough "romantic" adventures abroad, thank you. We want our $6.4 trillion back. And we want steep cuts in war spending. Americans are hurting.

This is a great post -- and thanks for quoting my hero EVD.