Asian giant hornets, nicknamed "murder hornets," have mandibles shaped like spiked shark fins to decapitate honeybees. Their venom and stingers have been likened to hot metal driving into skin. And now, for the first time, they have arrived in the U.S.

The Times is incorrect about the arrival date. The paper reported about four months ago that Asian hornets were found in Washington state in December 2019. They also appeared on Vancouver Island (where I live!) in Canada last August.

Canada's Ministry of Agriculture stated that Asian hornets "are not interested in humans, pets and large animals. They hunt insects for food. The only time hornets will attack is when their nest is disturbed." 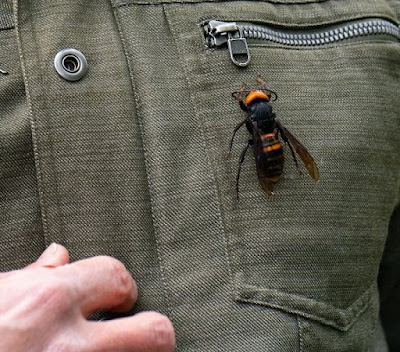 
wipe out a honeybee hive in a matter of hours, decapitating the bees and flying away with the thoraxes to feed their young. For larger targets, the hornet's potent venom and stinger — long enough to puncture a beekeeping suit — make for an excruciating combination that victims have likened to hot metal driving into their skin. In Japan, the hornets kill up to 50 people a year. ...

Beyond its size, the hornet has a distinctive look, with a cartoonishly fierce face featuring teardrop eyes like Spider-Man, orange and black stripes that extend down its body like a tiger, and broad, wispy wings like a small dragonfly.

In August 2019, a hive was discovered on Vancouver Island, "across a strait that probably was too wide for a hornet to have crossed from the mainland," reports The Times.


Crews were able to track down the hive on Vancouver Island. Conrad Bérubé, a beekeeper and entomologist in the town of Nanaimo, was assigned to exterminate it.

He set out at night, when the hornets would be in their nest. He put on shorts and thick sweatpants, then his bee suit. He donned Kevlar braces on his ankles and wrists.

But as he approached the hive, he said, the rustling of the brush and the shine of his flashlight awakened the colony. Before he had a chance to douse the nest with carbon dioxide, he felt the first searing stabs in his leg — through the bee suit and underlying sweatpants.

"It was like having red-hot thumbtacks being driven into my flesh," he said. He ended up getting stung at least seven times, some of the stings drawing blood. ...

Mr. Bérubé still managed to eliminate the nest and collect samples, but the next day, his legs were aching, as if he had the flu. Of the thousands of times he has been stung in his lifetime of work, he said, the Asian giant hornet stings were the most painful.

I was curious exactly where on the island the hornets had been spotted. For that, I had to find a more local news source. The Coast Mountain News reported Bérubé went into Nanaimo's Robins Park (which is in the middle of the city) on the night of September 18, 2019.

The CMN story reports: "Bérubé was stung four times during Wednesday's operation and said although he's fine, someone who isn't used to the venom could swell up considerably." (Hmmm. Did he add three stings when he spoke to the Times?)

There was also a report a week earlier about the discovery of the hornets.

I am five hours away (blue dot) from the murder hornets (red pin). 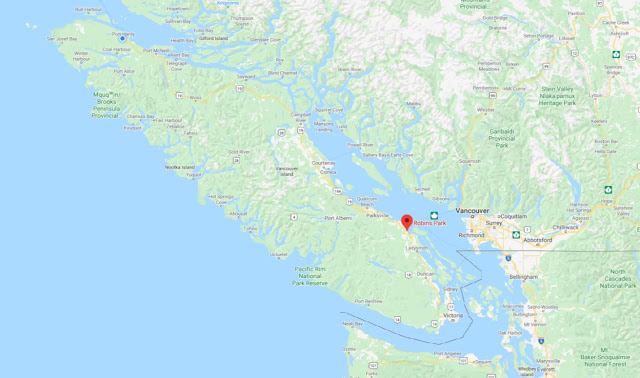