"Who would have thought that tracking the number of times the most closely watched human being on earth plays golf could be so fraught with ambiguity?" 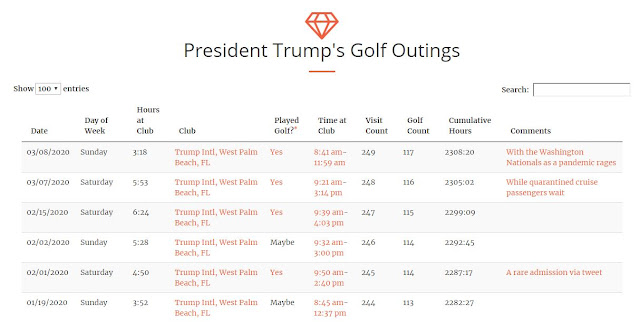 Trump Golf Count is a meticulous record of the enormous amount of time Donald Trump has spent golfing or simply hiding out at a golf club since winning the 2016 election.

Obama should play golf with Republicans & opponents rather than his small group of friends. That way maybe the terrible gridlock would end.
— Donald J. Trump (@realDonaldTrump) September 19, 2012

Can you believe that,with all of the problems and difficulties facing the U.S., President Obama spent the day playing golf.Worse than Carter
— Donald J. Trump (@realDonaldTrump) October 14, 2014

We pay for Obama's travel so he can fundraise millions so Democrats can run on lies. Then we pay for his golf.
— Donald J. Trump (@realDonaldTrump) October 14, 2014

President Obama has a major meeting on the N.Y.C. Ebola outbreak, with people flying in from all over the country, but decided to play golf!
— Donald J. Trump (@realDonaldTrump) October 24, 2014


As of May 18, 2018, the score of confirmed golf outings [at the same point in their times in office] is Trump 56, Obama 37. Our tally of Trump's time on the green is likely an undercount. Here's why.

The White House has on several occasions declined to confirm he played golf while spending the day at his golf club. So in some cases, we have to rely on reporters’ observations and those of private citizens who spotted Trump on the course and posted pictures on social media. ...

The New York Times and NBC News are tracking Trump's visits to his properties instead of the number of times he's played golf. According to both groups' count, Trump has visited his four golf courses more than 100 times since he took office. Whether Trump actually played a round golf on every single visit is hard to determine, but the tally indicates Trump has probably played golf more than we know. ...

During the campaign, Trump said he would play golf smarter than Obama ...

In addition to the golf facts, the Outings chart also includes "Comments". Trump's most recent outing, on March 8, had the comment: "With the Washington Nationals as a pandemic rages".

The site was created, and is maintained, by Sophie German (a pseudonym?):

Basically, I'm a data junkie. Probably like you, I am concerned about the erosion of truth that is currently plaguing U.S. politics, and I am kind of unhealthily obsessed with calling out hypocrisy wherever I see it.

Why I do this

When I first got the idea to track the President's golf outings, I set out to create a website that would be factual, yet entertaining. ... [M]y primary mission is to get these numbers right! I am also having tons of fun doing it. ...

How I track counts

I've set up a filter of the White House Pool reporters' RSS feed. The pool reporters take turns covering the President's activity, which means they now spend a boatload of time in Palm Beach, Florida, sitting in a library across the street from the golf club for hours while the President holds his "meetings and phone calls." I am using their reports to track the time POTUS spends at his golf clubs ... and when reporters catch him, I'll also keep count of the times he's observed actually hitting the ball.