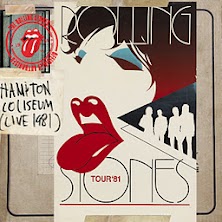 The Rolling Stones have released the second of six bootleg concerts planned for this year: Hampton, Virginia, December 18, 1981.

While Hampton was one of the better shows from the Tattoo You tour, the choice is a bit underwhelming, especially for fans like me, who were hoping for something like the two March 1977 club shows at Toronto's El Mocambo.

The Hampton show was one of six concerts taped for a King Biscuit Flower Hour broadcast. It has been available - nearly complete, missing only four songs - on various bootlegs over the years in excellent soundboard quality.

The new boot of the complete show is available only in the U.S. at the moment - $4.99 at 320 mp3 - but that should change soon. Oddly, it's not even listed on the Stones Archives site yet. Initial reviews report a stunning mix from Bob Clearmountain - similar to the fantastic work he did on the first release, Brussels '73 - with amazing separation, especially between the guitars. (You can hear most of the show right now at Wolfgang's Vault.)
Posted by allan at 5:50 PM 4 comments:


Running the Books: The Adventures Of An Accidental Prison Librarian - Avi Steinberg

The Shallows: What The Internet is Doing To Our Brains - Nicholas Carr

Fenway 1912: The Birth Of A Ballpark, A Championship Season, And Fenway's Remarkable First Year - Glenn Stout

Is There True Freedom Of Religion In The United States?

Consider Marcus Cederstrom's question in Salon: "What if Tim Tebow were Muslim?"


How would our society react if during every interview, Tebow said "Insha'Allah" or "Allāhu Akbar" rather than thank his Lord and Savior, Jesus Christ? Or instead of falling to one knee and praying, Tebow pulled out a prayer rug and faced Mecca? ...

There is no way to separate the man and the religion. Some people praise him for it, others recoil. When this happens, avid defenders of Tebow invoke freedom of religion. But as Tebowmania makes its way into politics, sports, religion and the everyday life of the mainstream United States, it is important to think about how we approach religion in this country. How we approach religious freedom in this country. Do we accept freedom of religion, any religion? Or do we accept freedom of Christianity?