The Paperback Art of Robert McGinnis 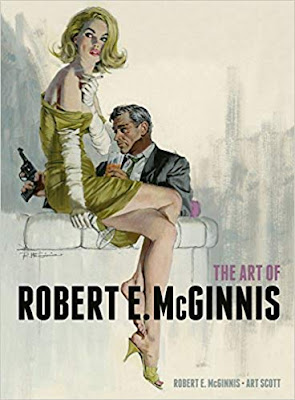 
It's possible that you don't immediately recognize the name Robert McGinnis. But if you are even remotely interested in vintage crime, mystery, and thriller novels, you've certainly spotted his artwork. After all, he's spent the last 60 years painting exceptional covers for those sorts of paperback yarns, most of them by still-familiar authors (Erle Stanley Gardner, Brett Halliday, Ruth Rendell, John D. MacDonald), though others came from writers whose popularity has since waned considerably (Carter Brown, Edward S. Aarons, Phoebe Atwood Taylor, Harold Q. Masur, and the like).

Over the course of his career, McGinnis—set to celebrate his 93rd birthday this coming Sunday [February 3]—has produced more than 1,000 unique paintings employed on American paperback book covers. His works are distinguished by their precise use of color, the artist's preference for portraiture over depicting story scenes, and especially the lithe and luscious women who are so often the focal point of his canvases. ...

"[T]here's nothing like a McGinnis woman," raves Charles Ardai, the editor at New York publishing house Hard Case Crime, which specializes in vintage-style paperback fronts and has made plentiful use of this artist's output over the last decade and a half. "Leggy, serene, aloof, unruffled, coiled, and deadly or enigmatic and sensuous, Bob's women are like otherworldly creatures, breathtaking and perfect." ...

"One thing I've noticed on the crime novels especially," says [Art] Scott [who in 2014 co-authored (with McGinniss) The Art of Robert E. McGinnis], "is how brightly lit most of his images are—rather unexpected, given how many of those books fall into the 'noir' genre. Together with his clean lines and uncluttered layouts ... he never missed a chance to work the light-and-shade angle and did it brilliantly."

Pierce edits The Rap Sheet and runs its companion blog Killer Covers. (In May 2018, he highlighted 12 exceptional cover artists.) In this recent article, he includes 39 McGinnis covers, but my favourite (of the ones I have seen) is not among them. 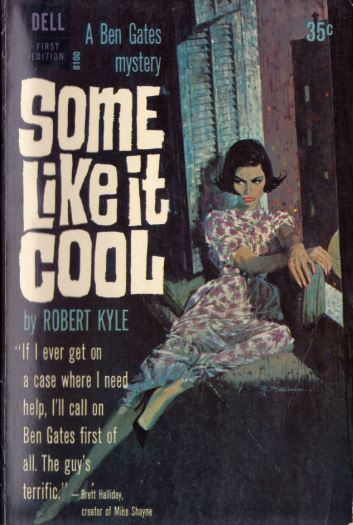 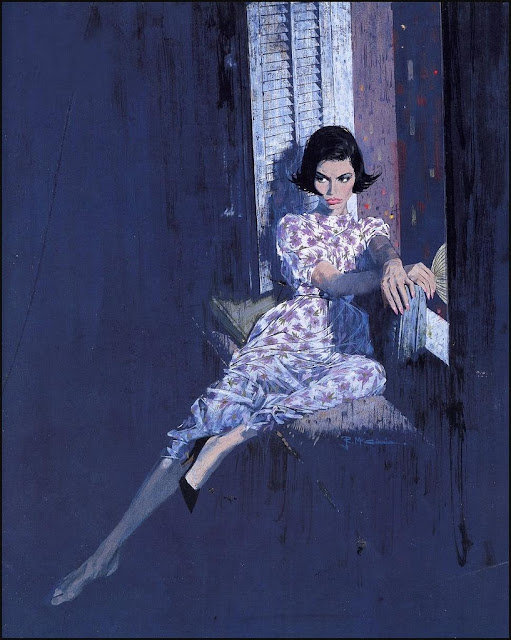 I also love certain editions of the Michael Shayne books, with the detective's head in a circle at the top of the cover. 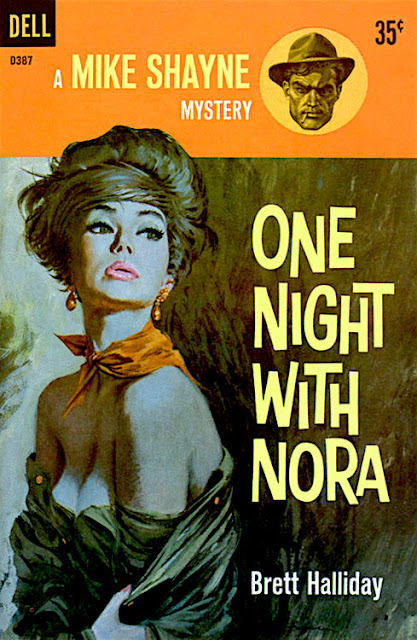 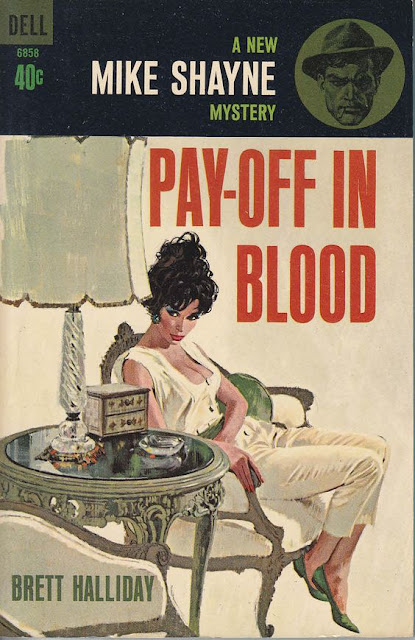 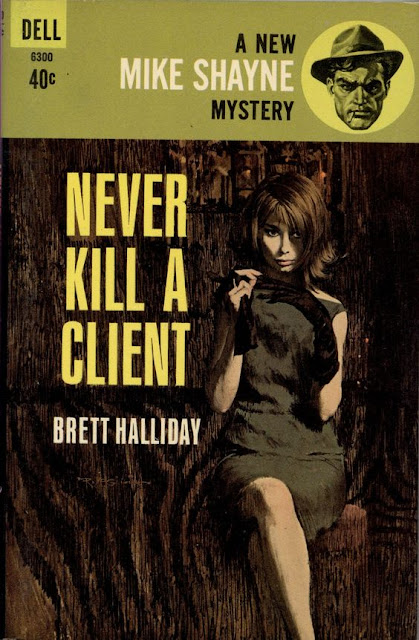 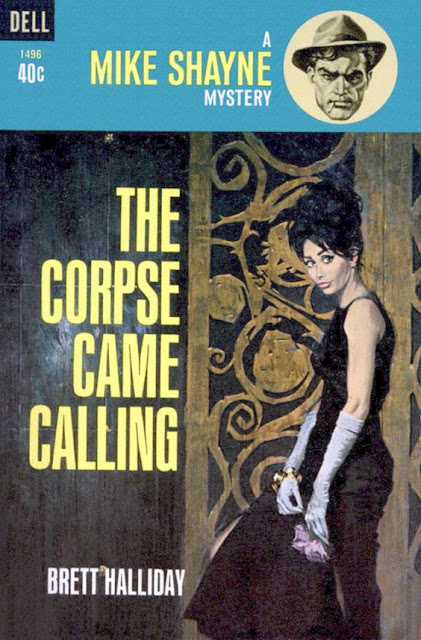 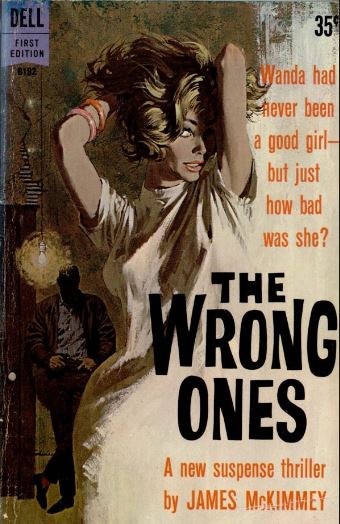 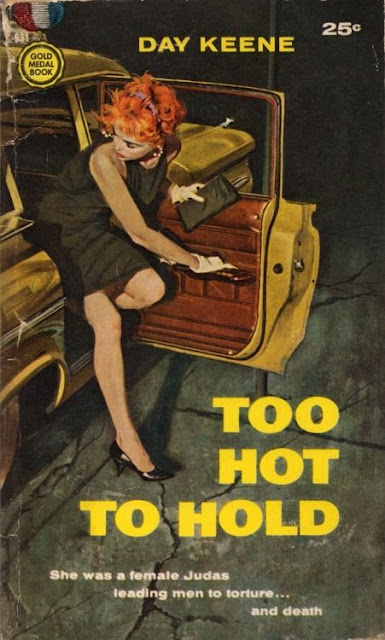 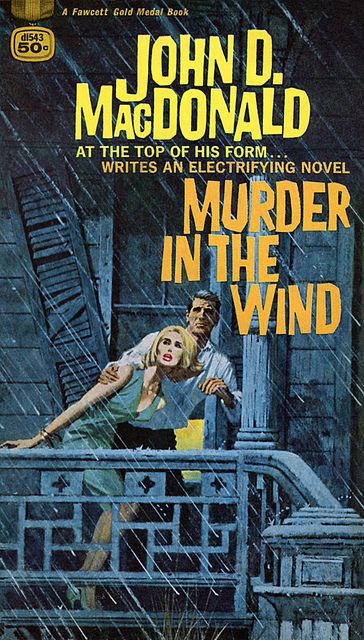 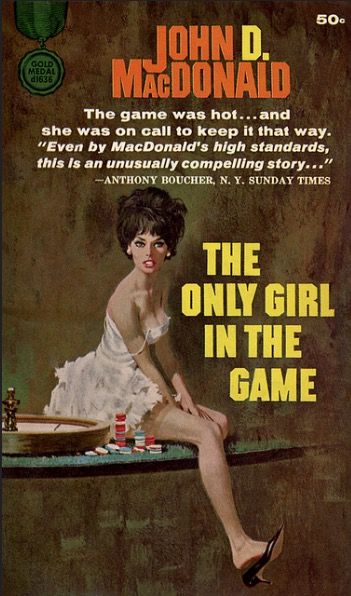 47 Years Ago, I Caught A Really Big Fish

Sunday, February 13, 1972: I went ice fishing with my father and caught a walleye that we measured as 24 inches long (and 5½ pounds). I was eight years old - and I've never caught a bigger fish. 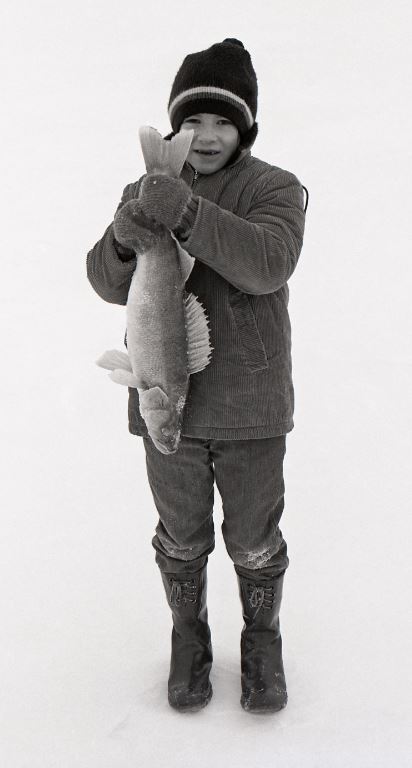 I love this next photo. I have done nothing to remove the various imperfections, which along with the dull grayness of both the snow on the frozen lake and the sky, gives the picture the feel of some doomed Arctic expedition from the 1910s. 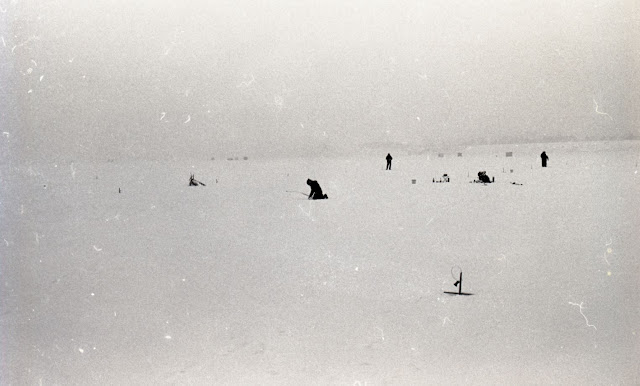 We would get out on the ice around dawn. My father would drill 12-15 holes in a straight line, maybe 30 feet apart. Looking at the space between (what I think is) me in the middle of the frame and the "tip-up" in the foreground gives you an idea of the distance between the holes. (My father built his own tip-ups by hand. I never thought about the name of these things when I was a kid. For all I knew, it was my father's (or a regional) term. Looking online now, tip-up seems to be the general name.)

Having them in a long row made it easy to keep an eye on all the lines. When a fish grabbed the bait, a minnow usually a few feet above the bottom of the lake, it triggered the release of a bright orange flag (which was bent and on a hook of some sort). When you saw a flag had sprung up, or someone else pointed it out, you knew something was going on. And you'd run to the hole.

On exceptionally cold and/or windy days, running to the very end of the row was not fun - though the exercise did warm you up a tiny bit. You often had to break the thin film of ice that had formed over the hole before you could begin pulling up the line (and, hopefully, the fish). You tossed your gloves aside and quickly brought up the cold line with your bare hands. When it was time to re-set the tip-up, the small pile of wet line beside you had usually frozen and it took time to untangle it all. My fingers were often completely numb by the time I could put my gloves back on. 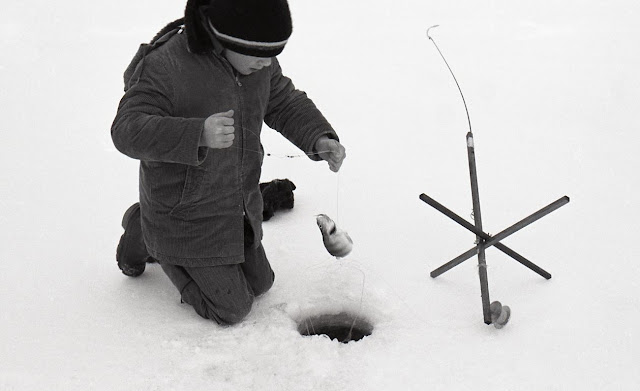 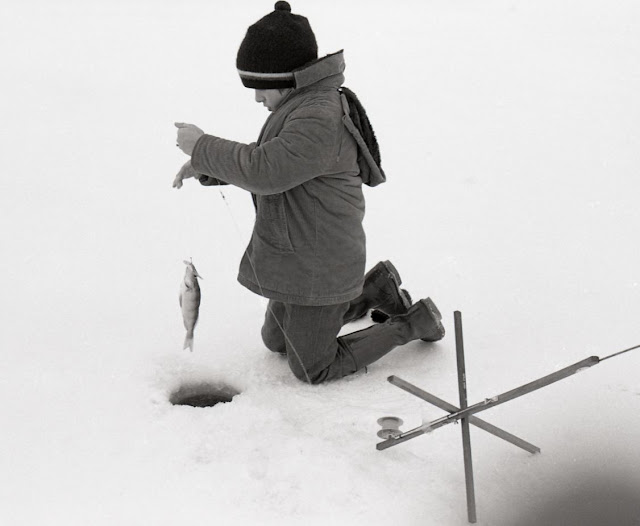 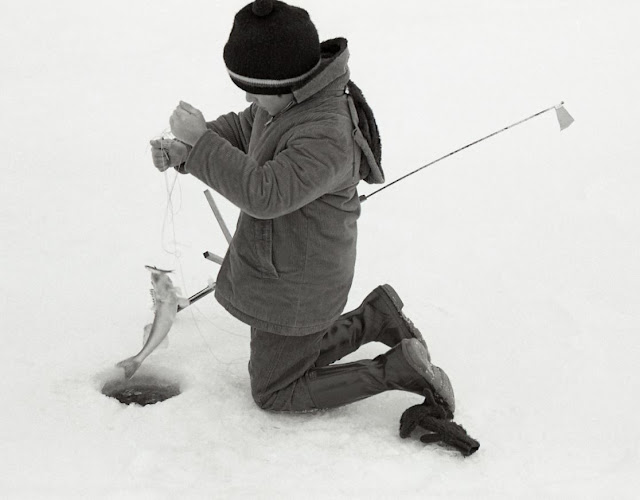