Book 6 Of My Struggle Will Be Published On September 4! 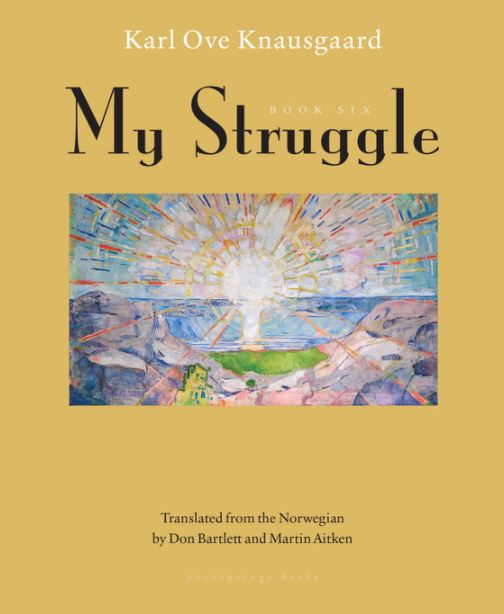 
The final installment in the long awaited, internationally celebrated My Struggle series.

The full scope and achievement of [Karl Ove] Knausgaard's monumental work is evident in this final installment of his My Struggle series. Grappling directly with the consequences of Knausgaard's transgressive blurring of public and private, Book Six is a troubling and engrossing look into the mind of one of the most exciting artists of our time. Knausgaard includes a long essay on Hitler and Mein Kampf, particularly relevant (if not prescient) in our current global climate of ascending dictatorships.

My Struggle is a series of six autobiographical "novels" in which Knausgaard reveals the banalities and humiliations of his life, his private pleasures, and his dark thoughts (as Wikipedia puts it). Knausgaard, who is Norwegian, published the six books from 2009–2011. The English translations began appearing in 2013.

I have no idea how I missed about 97% of the hype, but I did. It wasn't until December 6, 2016, that I opened Book 1. I was immediately addicted, and read all five books - a total of roughly 2,700 pages - in one month. It was (with perhaps one exception) the most enjoyable and astounding reading experience of my life*. And I want to re-read the five books right before diving into Book 6 (which is reportedly 1,264 pages!).

*: Evan Hughes of The New Republic said the books are "like opening someone else's diary and finding your own secrets". Zadie Smith admitted, at one point: "I need the next volume like crack."

In 2013, the Guardian stated that My Struggle "deserves to be called perhaps the most significant literary enterprise of our times":


A man in his 30s, married and living in a pleasant city in Norway, with his first novel just published to much acclaim, Knausgaard suffers from an indefinable malaise: his writing feels obstructed and forced, and its motivations uneasily egotistical; his personal and domestic life seem to constrict him while being unarguably the fruit of his own free choices. ...

What unfolds is a painstakingly detailed account of mid-life, as Knausgaard documents his meeting and relationship with a new partner in Stockholm, their progress into marriage and parenthood, their construction of domestic space and social life, the evolution of their familial relationships and the changing politics of their own bond. These are the universal themes from which My Struggle draws its abundance, and since there is no narrative requirement to attenuate them, Knausgaard finds himself in the position of being able to write about modern middle-class private life with a compendiousness and precision that are entirely singular and new.

One month later, the Guardian noted that in Book 2,


Knausgaard is brutally, painstakingly, viciously truthful – or at least appears to be – about his relationship with his wife and children. Linda is mostly presented as a stubborn, lazy, self-obsessed depressive, while his children are often seen as inconveniences, ignored and abandoned, or used as weapons in domestic disputes.

That is all true, but (a) there is much more in that book and (b) Knausgaard is at least every bit as "brutally truthful" about himself, sometimes to a shocking degree.

Book 3 concerns his childhood from ages 7-10 and Book 4 details his time as an 18-year-old teacher in a tiny fishing village in northern Norway. Book 5 finds Knausgaard in Bergen in his twenties, struggling to become a writer. (He supposedly wrote Book 5 - 550 pages - in only eight weeks.)
Posted by allan at 12:18 PM 1 comment: