Republicans Plan To Have 50,000 Volunteers Monitor Polling Sites For "Suspicious" Activity (Right After The Second-Busiest Month For Gun Sales In 8 Years And The Most Background Checks In FBI History) 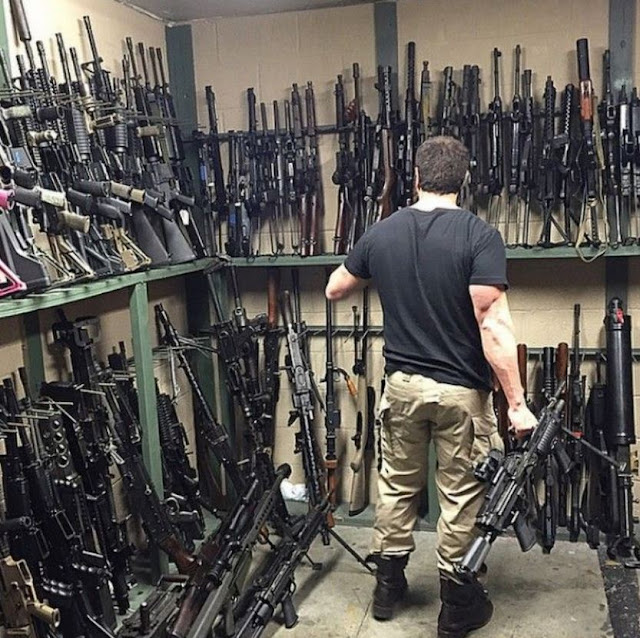 
The New York Times reported that 2 million guns were sold in the U.S. in the month of March alone—the second-busiest for gun sales after December 2012, the month of the Sandy Hook Elementary School shooting and just following Barack Obama's re-election. ...

After intense lobbying from the NRA, the Department of Homeland Security classified gun shops as "essential businesses." ...

The FBI processed 3.7 million background checks in March, the bureau's highest number for a single month; meanwhile, the NRA capitalized on the public health crisis by publishing articles like, "Pandemic Exposes Dangers of So-Called 'Universal' Background Checks." The article stated that Americans "cannot trust government to act as a gatekeeper on their fundamental rights" and "Americans must jealously guard their right to privately transfer firearms without government interference."

The Republican Party plans to recruit 50,000 volunteers to aggressively monitor polling sites in 15 key states for "suspicious" activity this November.

A 2018 federal court ruling lifted a decades-long consent decree barring the Republican Party from monitoring polls without a court's consent. The ban was instituted in 1982 after Republicans intimidated minority voters in New Jersey by hiring off-duty law enforcement officers to patrol polling places in minority precincts. The officers wore armbands ("National Ballot Security Task Force"); some of them carried firearms. After additional instances of voter intimidation were found, the ban was modified and extended in 1987 and 2009.

Back in 2016, Donald Trump urged his supporters to "watch" voting precincts in black-majority cities. Trump was so convinced he would lose the 2016 election that he had a comprehensive plan in place to challenge the election results and claim widespread voter fraud. Even though he won, Trump has not been able to resist making numerous claims of fraud. It's clear that's his plan if he loses in 2020. And now he has a large army of armed cult members who (as has been shown during this pandemic) have zero regard for the lives of other Americans.

On Wednesday morning, Trump threatened two states (Michigan, which he barely won (a margin of 0.3%) in 2016, and Nevada, which he lost by 2.4%), saying he would prevent them from receiving federal funding under the CARES Act if they made it voting more accessible. It's illegal and impeachable behaviour, but Trump will not likely face any consequences. Another front in Trump's war on fair and accessible voting is the destruction of the postal service.

Trump insists it's the states' complete responsibility to find protective equipment and COVID-19 tests and deciding when it's safe to relax distancing guidelines, but he must have the unquestioned authority to stop any states from using legal means to make voting easier. While Trump admits he voted by mail two months ago, that was different.

Also today: Trump tossed off another murder accusation against MSNBC's Joe Scarborough and declared China was guilty of a worldwide genocide ... before 9:00 AM.

He PUBLICLY tells Russia, China, and Ukraine to interfere in our elections.

He PUBLICLY threatens to withhold pandemic $ to Michigan & Nevada if they promote absentee voting.

Trump doesn’t hide his corruption. He thinks if he’s corrupt OUT IN THE OPEN, he’ll get away with it.
— Joe Walsh (@WalshFreedom) May 20, 2020

"This is one of many things that makes Trump’s tweets such a bizarre phenomenon. If he did this privately, it would—rightly—be a huge scandal. Yet when he does it as part of a few dozen wildly varied missives over the course of a morning, it’s written off" https://t.co/OVjZMQbNYD
— Aaron Rupar (@atrupar) May 20, 2020

Trump is giving states the Ukraine treatment in hopes of making it as difficult and dangerous as possible to vote in November https://t.co/vj9SpkeNHW
— Aaron Rupar (@atrupar) May 20, 2020

Republicans argued it was fine for Trump to extort a foreign country to get re-elected. (He was impeached anyway.)

Now Trump is extorting states to stop absentee voting to get re-elected in a pandemic. They're fine with that too. #TrumpDeathToll92K https://t.co/FrqVjqFxz7
— Swing Left (@swingleft) May 20, 2020

This is why so many of us thought it was imperative that Trump be removed from office. We warned that if he got away with using his office to try to rig an election, he would do it again. https://t.co/SQmTfYiJLv
— Chris Murphy (@ChrisMurphyCT) May 20, 2020

How Trump’s impeachment trial foreshadowed his handling of the coronavirus crisis https://t.co/GmzOwdcdQW
— Aaron Rupar (@atrupar) May 20, 2020

Hi! 👋🏼 I also have a name, it’s Jocelyn Benson. And we sent applications, not ballots. Just like my GOP colleagues in Iowa, Georgia, Nebraska and West Virginia. https://t.co/kBsu4nHvOy
— Jocelyn Benson (@JocelynBenson) May 20, 2020


And while Trump considers illegal acts against Michigan . . .

Rapidly rising water overtook dams and forced the evacuation of about 10,000 people in Michigan, where flooding struck communities along rain-swollen waterways and the governor said one downtown could be “under approximately 9 feet of water” by Wednesday. https://t.co/UGEuFiIxTS
— KAMR Local 4 News (@KAMRLocal4News) May 20, 2020

VIDEO: This is video flying above flood waters Tuesday morning. The video begins in Midland, Michigan and ends in the Sanford area. #MichiganFlood #MidlandCounty pic.twitter.com/0RcPXXiT3L
— Colton Cichoracki (@ColtonCwx) May 20, 2020

Pamela Karlan: “What would you think if, when your governor asked the federal government for the disaster assistance that Congress has provided, the President responded, ‘I would like you to do us a favor.’ I’ll... send the disaster relief once you brand my opponent a criminal.” pic.twitter.com/J96FY30k3y
— House Judiciary Dems (@HouseJudiciary) December 4, 2019