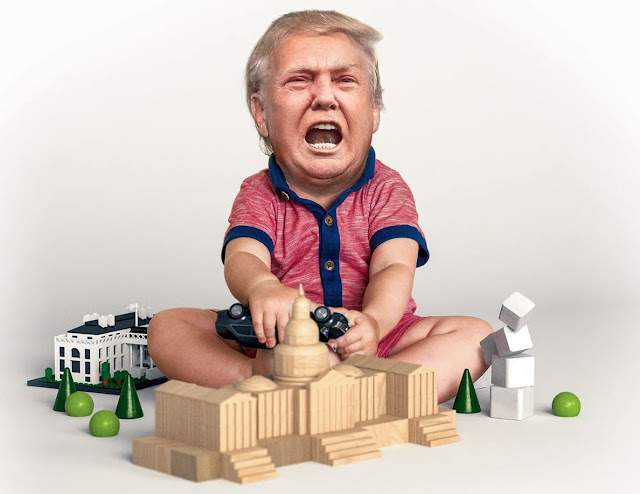 Donald Trump was warned about the emergence of SARS-CoV-2 in November 2019. Now it's almost eight months later and he has done next-to-nothing and still has no plan for either the pandemic or the economic depression it has caused.

Twitter sticks an inoffensive nudge under two of Trump's tweets (but does not delete or edit them in any way and does not label them as lies) and two days later, Trump signs an executive order aimed at controlling social media companies.


The executive order tests the boundaries of the White House's authority. In a long-shot legal bid, it seeks to curtail the power of large social media platforms by reinterpreting a critical 1996 law that shields websites and tech companies from lawsuits. But legal experts on both the right and the left have raised serious concerns about the proposal. They say it may be unconstitutional because it risks infringing on the First Amendment rights of private companies and because it attempts to circumvent the two other branches of government.

If Twitter had any backbone, it would respond by suspending Trump's account for hundreds of violations of the company's posting policies.

Pres. Trump: "I'm signing an Executive Order to protect and uphold the free speech and rights of the American people. Currently, social media giants like Twitter receive an unprecedented liability shield based on the theory that they are a neutral platform, which they are not." pic.twitter.com/awl4RULTRR
— CSPAN (@cspan) May 28, 2020


While the country is in disarray, the President wants you to know he’s the real victim here because Twitter fact checked two of his tweets pic.twitter.com/Oh5XSTvWa5
— Acyn Torabi (@Acyn) May 28, 2020

Things that don't bother him much:

Trump on Twitter/FB: "They have points of view & if we go by that, it's actually amazing there was a success in 2016, but we can't let this continue to happen. It's very unfair. You look at the statistics & you look at what is going on." (Russia used social media to help Trump!) pic.twitter.com/me9Ah8eMDB
— Aaron Rupar (@atrupar) May 28, 2020

To think all this is because Twitter merely added a couple of links to fact check 2 tweets full of lies, while still keeping those tweets up. Truly the flakiest of snowflakes. The thinnest of skins.
— Yoonified (@UnifiedDivyde) May 28, 2020

"They try to silence views that they disagree by selectively applying a fact-check" -- put simply, Trump wants the power to lie with impunity on social media and to be able to benefit from advertising that pushes lies (as is already the case on Facebook) pic.twitter.com/MgyHXsKTPk
— Aaron Rupar (@atrupar) May 28, 2020

.@jonkarl: Given your concern with Twitter, have you given any consideration to leaving your account and walking away?

TRUMP: "If you weren't fake, I would even think about it. I'd do it in a heartbeat."

Trump indicates he thinks it's a problem for Twitter to showcase stories that don't reflect positively on him, then directs harassment towards a specific Twitter employee he doesn't like pic.twitter.com/bGH9qrAdAt
— Aaron Rupar (@atrupar) May 28, 2020

Pres Trump said Twitter is acting as "an editor with a viewpoint" because they are now applying fact checks to his tweets.

He said, "I guess it’s going to be challenged in court, but what isn’t?"

The effect of this, I think, will be the opposite: platforms will now have incentives to: (1) change their terms of service to allow greater ability to regulate user content to avoid problems with now being considered a "publisher"; and (2) ban users prophylactically.
— Deano Pellegrino (@PellegrinoDeano) May 28, 2020

The nuclear response from WH should tell you something about Trump’s campaign strategy.
— Nick Confessore (@nickconfessore) May 28, 2020

Trump was repeatedly warned about Coronavirus in January and February and yet he waited 70 days to take any action.

A bit like threatening to close down a restaurant for health violations while eating one of their meals.
— Brian Perry (@BTP1960) May 28, 2020


Lies, Lies In Every Step You Walk

It takes some chutzpah to mismanage a pandemic that leaves 100,000 Americans dead and then mock your political opponent for following your own government's guidance about wearing masks https://t.co/bD5HzwisGC
— Aaron Rupar (@atrupar) May 28, 2020

We are not prepared for a pandemic. Trump has rolled back progress President Obama and I made to strengthen global health security. We need leadership that builds public trust, focuses on real threats, and mobilizes the world to stop outbreaks before they reach our shores. https://t.co/1qqpgayUEX
— Joe Biden (@JoeBiden) October 25, 2019


Lies, Whispered Sweetly In My Ear


.@Acosta: On Twitter - shouldn't POTUS be fact-checked? Especially one who has made as many false claims as Trump?

McENANY: There's no one that should be fact-checked more than the media

A: Are you saying Trump hasn't lied?

M: His intent is always to give truthful information pic.twitter.com/4JKBwjpREx
— Aaron Rupar (@atrupar) May 28, 2020

WH press corps are asleep at the wheel today...and every day.

.@jonkarl: POTUS clearly said things in these mail-in voting tweets that aren't true. Do you acknowledge that?

McENANY: No, I don't

KARL: *details specifics respects in which the tweets were factually incorrect*

M: *dissembles about incidents that don't back up Trump's claims* pic.twitter.com/dIskpGNq6q
— Aaron Rupar (@atrupar) May 28, 2020

KARL: Trump said California was sending out ballots to everybody in the state. That is a false statement. Will he correct that?

McENANY: *alludes to claims that have already been debunked as "pants on fire" lies https://t.co/VHNbCfjixp* pic.twitter.com/RDG70TlfwQ
— Aaron Rupar (@atrupar) May 28, 2020

Someone should tell @realDonaldTrump that COVID-19 is a new social networking platform that is fact-checking his tweets. Maybe then he’ll try to actually do something about it.
— bumpkins (@bumpkins_np) May 28, 2020

McEnany doesn't get that a deadly pandemic is a legitimate reason for people to vote by mail instead of going to polling places and risking getting sick pic.twitter.com/UueZ2icQ0Q
— Aaron Rupar (@atrupar) May 28, 2020

Q: Would Trump welcome a defamation suit from Joe Scarborough?

McENANY: I would refer you back to my previous comments that the audio from the Don Imus show is disturbing -- there is a lot of laughing & joking about this matter that is certainly not a laughing & joking matter pic.twitter.com/uSoffMh5bT
— Aaron Rupar (@atrupar) May 28, 2020

Trump RTed this video in which a supporter says "the only good Democrat is a dead Democrat."

He clarifies he's not talking literally. But he told Daily Beast on Weds that some Dems might be guilty of treason and should get "a firing squad" or "the rope."https://t.co/mPu7xKx3b4 https://t.co/jDqPzxyuoG
— Aaron Blake (@AaronBlake) May 28, 2020

„Haha, someone should shoot Republicans, just joking of course.“ I wonder what the GOP would say if Biden RT‘d such a tweet.
— Razorblade Ricochet (@the_magic_m) May 28, 2020

What exactly is the non-literal interpretation of that statement?
— morelikespace (@kate_macdonald) May 28, 2020

„Haha, someone should shoot Republicans, just joking of course.“ I wonder what the GOP would say if Biden RT‘d such a tweet.
— Razorblade Ricochet (@the_magic_m) May 28, 2020


100,000. Congratulations to President Trump on a true success story. pic.twitter.com/SbuQTllJQH
— The Daily Show (@TheDailyShow) May 27, 2020