They Hate Us For Our Brontosauri

The mermaids of Weeki Wachee Springs are probably not very high on the list of terrorist targets. Neither is the Styrofoam and fiberglass stegosaurus at Dinosaur World in Plant City.

Yet both facilities were on a list of sites the federal government wanted "hardened" under the $90 million Buffer Zone Protection Program, granted by the Department of Homeland Security as a way to help state and local governments secure "critical infrastructure" against attack.

Lifted directly from Billmon's Whiskey Bar.
Posted by allan at 10:42 AM 2 comments:

From the Marysville-Yuba City (Calif.) Appeal-Democrat:

One of the smartest things President Bush did to reduce recovery costs in the aftermath of hurricanes Katrina and Rita was to suspend Davis-Bacon Act rules in the hardest hit states. But Congress is frantically trying to overrule the president, which would add billions of dollars to the already staggering recovery costs.

From the Jacksonville (N.C.) Daily News:

One of the smartest things President Bush did to reduce recovery costs in the aftermath of Hurricanes Katrina and Rita was to suspend Davis-Bacon Act rules in the hardest hit states. But Congress is frantically trying to overrule the president, which would add billions of dollars to the already staggering recovery costs.

From the Kinston (N.C.) Free Press:

One of the smartest things President Bush did to reduce recovery costs in the aftermath of Hurricanes Katrina and Rita was to suspend Davis-Bacon Act rules in the hardest hit states. But Congress is frantically trying to overrule the president, which would add billions of dollars to the already staggering recovery costs.

Amazing! More here.
Posted by allan at 9:06 PM No comments:

From Lawrence Wilkerson, Colin Powell’s chief of staff from 2001-2005:

[T]he case that I saw for four-plus years was a case that I have never seen in my studies of aberrations, bastardisations, and perturbations in the national-security [policy-making] process. What I saw was a cabal between the vice president of the United States, Richard Cheney, and the secretary of defense, Donald Rumsfeld, on critical issues that made decisions that the bureaucracy did not know were being made. ...

You’ve got this collegiality there between the secretary of defence and the vice president. And then you’ve got a president who is not versed in international relations -- and not too much interested in them either. ...

If you’re not prepared to stop the feuding elements in the bureaucracy as they carry out your decisions, you are courting disaster. And I would say that we have courted disaster in Iraq, in North Korea, in Iran.

Billmon has a lot more.
Posted by allan at 1:22 PM No comments:

Since The Move, I've been wondering what to do with this blog. Now that I'm living in Canada, I've been focusing less on US news. It hasn't been a conscious decision, but it's happening just the same. I still check out the Latest Breaking News page at DU several times a day, but I do not give the daily flow of events (such as the soon-to-be-announced Plame indictments (22 of them?!)) the same attention I did before.

Maybe with the Red Sox season over, I'll soon focus on some items. I honestly don't know. I'm submit a (music-related) book proposal in November, so I may be occupied with that project this winter.

In the meantime, the links at the right are where I get most of my stuff. Cursor should be daily reading, and Cannonfire often links to other investigative blogs.

Here's an excellent piece about Bush's staged chat with US troops the other day, the revelation that one of the main troops interviewed (Master Sgt. Corine Lombardo) is actually a military media spokeswoman, the Pentagon's propaganda TV channel, the astounding indifference of the major media to this manipulation, and how everything ties together.
Posted by allan at 10:24 AM No comments:

In which the Cheney administration believes that 100 = 1.

Liar of the week: George W. Bush said on his Saturday radio address a week and a half ago that Iraq has 100 battalions of battle-ready soldiers. By the time he got to his television address on Thursday, it was 80 battalions. (I guess it's worse to lie if they're taking pictures of you.) Unfortunately, the next day Gen. George Casey, who oversees U.S. forces in Iraq, said of those 80, the number of Iraqi battalions fit to fight independently of U.S. support had slipped from three to one. One, three, 80, 100 -- if this is Tuesday, it must be ...

In the past year, Dick Cheney's Halliburton stock options have gone up in value 3,281%. ... Yeah, you read that right.

As Xymphora has written:

The Cheney-Halliburton connection has to be the largest and most blatant example of corruption in modern American history. Cheney is the effective President of the United States, and is clearly behind the awarding of massive contracts to a corporation that continues to pay him. If this were happening in Nigeria we'd sneer at the corruption, but in the American context it is beyond belief.

What Will It Take?

In the wake of the Sept. 11 terrorist attacks, the government changed a contract to hire federal airline passengers screeners in a way that cost taxpayers an additional $343 million. More than three years later, officials cannot explain exactly why.

Homeland security officials say they have no memos, e-mails or other paperwork to document the reason for the change, as required by federal contracting regulations. They have also offered accounts of the decision that conflict with internal government documents obtained by The Washington Post. ...

Michael P. Jackson, deputy secretary of the Homeland Security Department, said in a recent interview that the agency does not have paperwork to back up its account and that he cannot recall the details surrounding the decision.

"Honestly, I have no memory of it," said Jackson, who said he was ultimately responsible for the contract as second-in-command at the Transportation Department in 2002.

Hey, but don't worry, US taxpayer.

The contract is now the subject of an investigation by the homeland security department's inspector general.

Besides recalling OJ's on-going search for the "real killers", this robbery story reminds me of a recent Get Your War On panel: 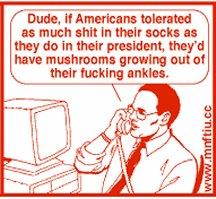 The civilized world knows very well that other fanatics in history -- from Hitler to Stalin to Pol Pot -- consumed whole nations in war and genocide before leaving the stage of history.

Evil men obsessed with ambition and unburdened by conscience must be taken very seriously, and we must stop them before their crimes can multiply.

Also checkout Laura's post on terror and fear.
Posted by allan at 11:32 AM No comments: