Trump Finds It Hard To Keep His Lies Straight ("We Were Blindsided, But I Acted Early")

But, wait a minute:

#Trump - "I felt it was a pandemic long before it was called a pandemic." #coronavirus #COVID19 pic.twitter.com/CIiVL5xKeU
— Michael Holmes (@holmescnn) March 17, 2020

Trump has flip-flopped on this subject more often than a fish out of water. He swings wildly between covering up his inaction by saying everyone was surprised ("Nobody knew this was possible, we were blindsided") to needing to portray himself as the hero who was smarter than everyone else ("I acted early and boldly"). But putting undue emphasis on his one modest decision at the end of January shines a bright light on the fact that he did nothing during the entire month of February and almost half of March.

It's a fact: Trump was warned multiple times by US intelligence agencies about the serious threat posed by this virus as far back as mid-November 2019. He received numerous warnings throughout December that this "could be a cataclysmic event". And then he did nothing for four months.

Trump was minimizing the threat as recently as March 10: "It will go away. Just stay calm. It will go away." (He declared a national emergency three days later.) Trump also bashed Democrats on March 9 for making an excessive fuss about the virus, "far beyond what the facts would warrant", and implying the common flu was far worse.

US intelligence agencies became aware of the emerging disease in the second week of November 2019. They prepared a classified document and informed the Trump administration, "which did not deem it of interest". The intelligence agencies also shared the information with two allies: NATO and Israel. 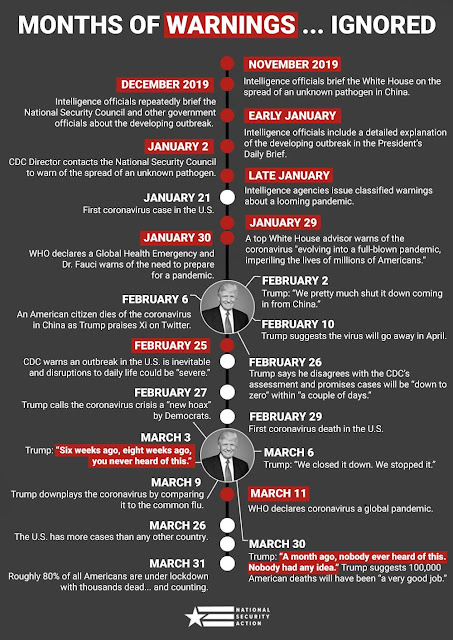