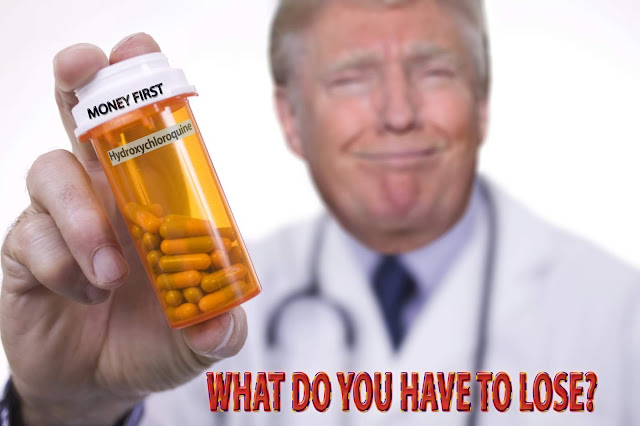 White House officials and several Republican lawmakers believe that Donald Trump's behaviour at the daily White House press briefings are hurting him more than they are helping. They would like him to "limit his error-filled appearances" and "move more aggressively to prepare for the looming recession".

Good luck with that. The absolute last thing Trump wants is to abandon his two hours in the national spotlight where he can rant about his enemies, rave about unapproved drugs, non-existent tests, and unordered supplies, and lie and contradict himself about everything else. Why would he willingly swap the best part of his day for actual work? The New York Times states, however, that on Wednesday and Thursday, Trump made "relatively brief appearances before leaving the room".

It's astonishing that only in recent days are people getting sick of listening to an insufferable, defensive, mentally-deranged, tantrum-throwing egomaniac desperately pushing his version of reality on the nation, attacking his perceived enemies, countering facts by repeating the same lie over and over, refusing to let medical experts answer questions he thinks will make him look bad, and insisting every day that prosperous times are right around the corner (and they are going to be more prosperous than we can even imagine), as the newscrawl at the bottom of the screen announces another 1,200 or so Americans have died today.

Lindsey Graham says Trump "sometimes drowns out his own message" and thinks "a once-a-week show" would be more effective. Other Republicans say the briefings are "too long" and "going off the rails a little bit". (Yeah, just a tad.) Weeks ago, Mitch McConnell urged Trump directly to let Drs. Anthony Fauci and Deborah Birx be the faces of the response. That wise counsel was, needless to say, completely ignored.


Some of Mr. Trump's aides have quietly suggested to him that he ratchet back his public attacks on the governors who have emerged as leaders in the response to the virus. But they acknowledge their efforts can be something of a fool's errand; the president has his style and he won't change, they say. ...

His attacks on Gov. Gretchen Whitmer of Michigan, a popular Democrat and potential vice-presidential pick for Mr. Biden — whom Mr. Trump called a "half-Whit" and "that woman" — were of particular concern to some aides and political advisers, who believe he risked alienating voters in a pivotal state. ...

Advisers are torn between knowing that a less abrasive approach would help Mr. Trump and their awareness that he can't tolerate criticism, regardless of the setting. ... Mr. Trump's penchant for ad hominem attacks, Republicans say, illustrates why he has little room for growth among the electorate. ...

"He can't escape his instincts, his desire to put people down, like Mitt Romney, or to talk about his ratings," said former Representative Carlos Curbelo, a Florida Republican. ... "A leader in this sort of crisis should have a 75-to-80-percent approval rating." [Trump is at 44.6%.] ... [A] number of prominent Republicans believe Mr. Trump has hurt himself by making only the most halting attempts at demonstrating an above-the-fray unity.

Many Republicans are skeptical that Trump can win if he's still saddled with double-digit unemployment in November. Senator Pat Toomey of Pennsylvania said he "won't be surprised if we have 25 percent unemployment," which would match the height of the Great Depression, by the start of the summer.