It sounds like Dr. Birx is describing a child here. A child should not be leading daily press briefings during a pandemic (and in an ideal world, shouldn’t be president either) https://t.co/tTOkFlOnRf
— Dana Nuccitelli (@dana1981) April 25, 2020

Daniel W. Drezner of the Washington Post has collected 278 references from fellow Republicans or allies describing Trump as a toddler or small child (i.e., his impatience, temper tantrums, short attention-span, intelligence level, etc.). (No descriptions from Democrats or pundits are included.)

Back on April 25, 2017, Drezner tweeted: "I'll believe that Trump is growing into the presidency when his staff stops talking about him like a toddler."

I'll believe that Trump is growing into the presidency when his staff stops talking about him like a toddler. https://t.co/yAZg1uZnpy pic.twitter.com/o8UltcVhda
— Daniel W. Drezner (@dandrezner) April 25, 2017


The point of the tweet was to push back on the occasional impulse by Very Serious People to claim that some speech or act by Donald Trump proved that he was "growing into the presidency." ... The thing is, it quickly became clear that the evidence that Trump was not growing into the presidency was hiding in plain sight. Barely a week or even a day could pass without someone with access to Trump telling the news media in no uncertain terms the ways in which he was unfit for office. So I decided to keep adding to the thread. ... Every week I will update this post to include any additional tweets.

While anyone can submit new references, Drezner has very strict criteria for inclusion:


1.  The example has to be sourced from an ally of Trump. It doesn't matter if Democrats or pundits describe the president as having the emotional maturity of a toddler. That's just partisan politics or conventional wisdom. No, what makes these stories stand out is that these descriptions are coming from fellow Republicans on Capitol Hill in the cabinet or loyal treaty allies or — most often — from within Trump's own White House staff. The point is, this is how Trump's most trusted advisers view Trump.

2.  The example has to come from a mainstream media news source. No Infowars or RT here, thank you very much.

3.  Keep repeats to a minimum. ... I have tried not to add echoes to a single story onto the thread, although sometimes enough new information appears to merit inclusion.

It's pretty impressive. And completely depressing. 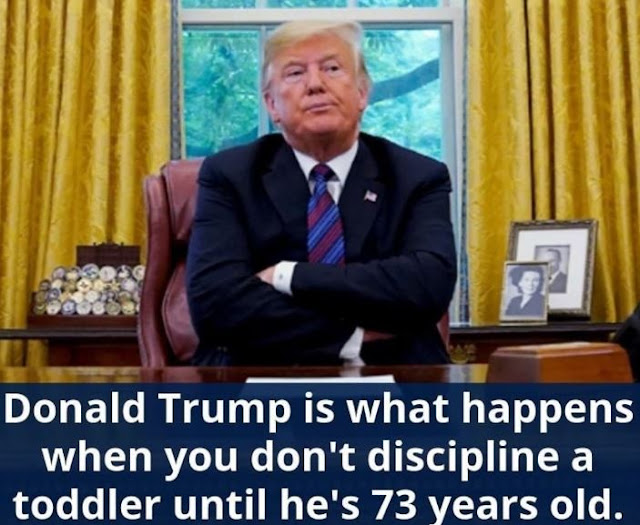 In June 2018, Heidi Stevens of the Chicago Tribune asked everyone to stop referring to Donald Trump as the toddler-in-chief:


It implies a level of innocence and curiosity that's altogether absent from this president. It implies a work in progress. It's insulting to toddlers. ...

Trump is overseeing one of the cruelest policies in this country's modern history: the forced separation of hundreds of children from their parents.

The United Nations has called on the administration to immediately halt this barbaric policy. Child welfare advocates warn that the separations may cause permanent trauma to the separated children. News reports describe authorities using force to yank babies and toddlers from terrified parents. ...

Comparing Trump to a toddler was simple and understandable at first. ... It's no longer tenable. ...

Trump is not learning as he goes ... He is who he is. He will remain that way, most likely, as long as he inhabits the White House. His legacy will include, among other things, the implementation of an immigration policy that goes against every human instinct we are born with.

That's not childish. It's heartless.