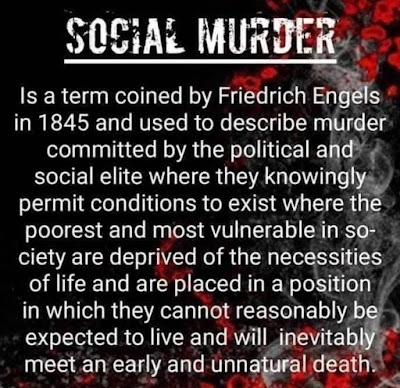 When one individual inflicts bodily injury upon another such that death results, we call the deed manslaughter; when the assailant knew in advance that the injury would be fatal, we call his deed murder. But when society places hundreds of proletarians in such a position that they inevitably meet a too early and an unnatural death, one which is quite as much a death by violence as that by the sword or bullet; when it deprives thousands of the necessaries of life, places them under conditions in which they cannot live — forces them, through the strong arm of the law, to remain in such conditions until that death ensues which is the inevitable consequence — knows that these thousands of victims must perish, and yet permits these conditions to remain, its deed is murder just as surely as the deed of the single individual; disguised, malicious murder, murder against which none can defend himself, which does not seem what it is, because no man sees the murderer, because the death of the victim seems a natural one, since the offence is more one of omission than of commission. But murder it remains.

Friedrich Engels, The Condition of the Working-Class in England (1845)


The hallmark of conservative economic theory is that firms should not be constrained by the state in their pursuit of profit. State intervention is not necessary because firms must obey the will of "the market". ... Conservative economics assumes that decisions reflect individual preferences and free choice. ...

In the early days of capitalism, both economic theory and government policy were dominated by conservative ideas. The results were catastrophic. Edwin Chadwick, Commissioner of the Board of Health of Great Britain from 1848-1854, declared that the poorer classes in the western part of London were exposed to steady, unceasing and sure causes of disease and death peculiar to them: "The result is the same as if twenty or thirty thousand of these people were annually taken out of their wretched dwellings and put to death" (Dubos, 1950). This is the context of Frederick Engels' use of the term social murder in The Condition of the Working-Class in England in which he blamed the diabolical living conditions of workers in the "great towns" on the economic system ...

The people subject to these horrific conditions did not sit passively by and accept their fate. The next hundred years or so constituted a running battle to create institutions – either using the state, which passed protective legislation, or outside the state, by creating things like unions – to alleviate the more debilitating conditions of capitalism. In doing this they had to battle conservative theorists and the business class, who claimed at every turn that any of these profit-compromising institutions would destroy the economy. Progress was gradually made despite often-fierce resistance. The work week was eventually shortened, child labour outlawed, safety and health regulations instituted and state assistance to the destitute increased. The major gains, however, only came with the combination of the social disaster of the Great Depression, which galvanised the population to insist on state supports, and the full employment of the Second World War, which put the working class in a position sufficiently powerful to force their demands despite the resistance of business.

Since around 1980 this trend has been reversed. The protective institutions of society have been whittled away. As in the early nineteenth century this involves empowering the business class at the expense of the rest of society. ...

Death is only the most dramatic consequence of corporate power in our society. Increased corporate power, and the conservative economic policies that justify it, lead to inequality and economic instability. In an effort to reduce the size of government, and its accompanying tax "burden", governments have reduced many of their socially beneficial roles, from funding research and development to providing public education, which would have created a more innovative and socially mobile society. Government has created a less equal society after tax income distribution through tax reductions for the rich. Perhaps the most damaging conservative policies in this respect were in the labour market.

The 2008 economic crisis was started by the collapse of a deregulated financial industry, but this was only part of the story in the US where three decades of conservative labour market policy created profitability at the expense of most Americans. Starting in about 1980 unemployment benefits have become less generous, the real minimum wage has fallen, legislative changes have made it more difficult to unionise and free trade agreements have forced US workers to compete with those in the developing world.

These changes resulted in extraordinary exploitation and inequality. Thomas Piketty and Emmanuel Saez calculated that between 1973 and 2000 average income of the bottom 90 per cent of American taxpayers fell by 7 per cent. Incomes of the top 1 per cent rose by 148 per cent, the top 0.1 percent by 343 per cent, and extremely well off in the top .01 per cent rose by an amazing 599 per cent (Piketty and Saez, 2003). This was not only undesirable from an equity standpoint, but it also placed the entire economic system in danger. Households responded to their declining wages by working more and going into debt to maintain their level of consumption. This proved a tremendous benefit to firms, which were able to maintain their sales without having to increase the incomes of their workers to do so. Of course, it also created the looming levels of US household debt that helped cause the current economic crisis.

The gulf between the promises of conservative economic policy and its results are becoming increasingly clear. While it promises economic benefits for the vast majority of the population, in reality income, power and privilege have been shifted toward those who own and control the corporate world and away from the majority. The current conservative policy environment has made our society less healthy, more dangerous, less stable and more unequal.