"This Monster Came And Worked Its Horrible, Horrible Spell" 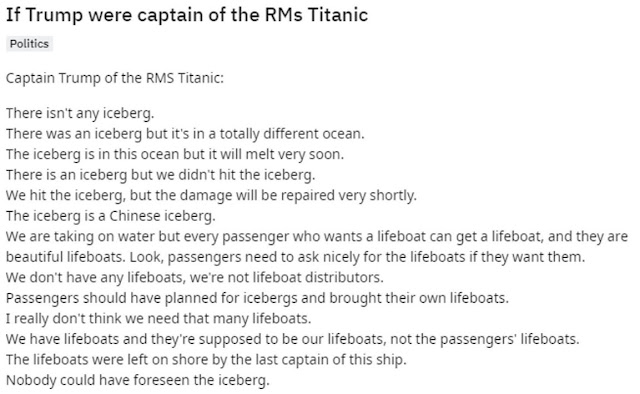 Testing capacity appears to have plateaued again, and yet we're not seeing declining positive rates. We're still nowhere close to having a true sense of the scale of the outbreak.
— The COVID Tracking Project (@COVID19Tracking) April 10, 2020

This is just outright corruption. A mafia system where being friends with the big don means you get rewarded (with critical medical supplies during a pandemic). And they're BRAGGING about it, because they know Dems are too scared to do anything. https://t.co/LjB92JN8HP
— Will Stancil (@whstancil) April 10, 2020

I guess he didn't listen to the staff that was worried about his hostility and erratic White House Coronavirus rally performances.

I'll bet he saw the Fox outlier poll and his "gut" tells him that the voters love a raging, petty asshole in the middle of a global catastrophe

Trump: "We have to get our country open."

Question: "Will you say, sir, what metrics you will use to make that decision?"

What's he going to do? Order everyone back to work and all business to open? And if they don't, send in the National Guard to drag everyone out of their houses? https://t.co/jmfBM7oyWl
— digby (@digby56) April 10, 2020

Exactly! I pulled my hair out as MSNBC w/ @chucktodd and @kwelkernbc vigorously agreed the "biggest decision of his presidency" is indeed "when to open the economy" accepting Trump's framing totally. Uh no, his big decision is over. It was *Preparing in January* He messed up 100%
— Rajat Soni (@rsoxPNW) April 10, 2020

Good point. He already faced the biggest decision of his career. It was to prepare the country and manage the government for the pandemic.

Trump says US doesn’t need to have a nationwide testing system in order for Americans to go back to work: “We want to have it and we’re going to see if we have it. Do you need it? No. Is it a nice thing to do? Yes.”
— Jim Acosta (@Acosta) April 9, 2020

Birx just said something important at briefing... that every health care worker in the country could be tested right now if Abbott m2000 machines were running at capacity (they're not). “they could have screened in these last three weeks 100% of the health care workers..."
— Jim Acosta (@Acosta) April 8, 2020

At yesterday's briefing, she said about 80% of Abbott m2000 machines are currently sitting idle in laboratories. Birx says she's talking to stakeholders about the issue tonight and tomorrow. But hinted WH action on this could be coming.
— Jim Acosta (@Acosta) April 8, 2020

Media: @Acosta asks @realDonaldTrump: "If you reopen the country in May and there's a new outbreak or spike in infections, are you open to the idea of shutting the country down again?" Trump: "Depending on the outbreak, yeah ... The facts are gonna determine what I do." pic.twitter.com/fNHdyIIqYr
— Porter Anderson (@Porter_Anderson) April 10, 2020

Trump says there will be an “opening our country council” announced on Tuesday. Won’t call it a “task force.” He indicated that if there are spikes in infections he would be open to shutting down parts or whole country again.
— Jim Acosta (@Acosta) April 10, 2020

One of the biggest lessons of this pandemic is that dumb people are even dumber than you could possibly imagine. Case in point —> https://t.co/WN0IUeVLu2
— Matt O'Brien (@ObsoleteDogma) April 10, 2020

Jesus. WTF is he talking about. Suicide? Does he honestly think there are 10's of thousands of us that will commit suicide if we don't "open" the economy? #TrumpMadness
— Char (@CHARHARTMAN) April 10, 2020

When @Acosta asks Trump if he was ever briefed on Navarro's COVID-19 warning memo, he says he "can't remember."

Trump, talking about business interruption insurance policies, says he is very good "at reading language." He adds, "I did very well on these subjects, OK?"
— Daniel Dale (@ddale8) April 10, 2020

President Trump just said the WH coronavirus task force briefings are the "saddest news conferences" he has ever had to do.

He also said today on Twitter, "the T.V. Ratings for the White House News Conference’s are the highest." https://t.co/4ZoWq6BYlg
— Yamiche Alcindor (@Yamiche) April 10, 2020