One Month Ago, The Self-Proclaimed "Chosen One" Declared A National Emergency. Almost Nothing Has Been Done To Fight the Coronavirus Since. 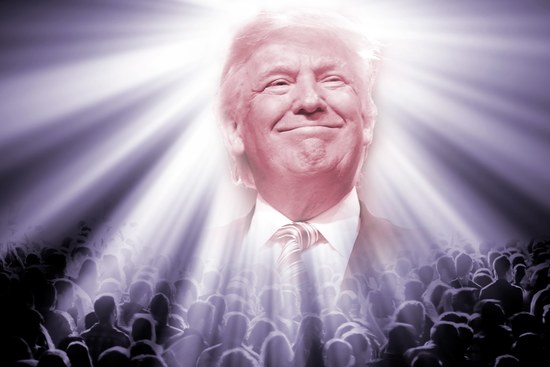 
The problem for Trump isn't just that he dropped the ball in the beginning. The problem for Trump is that he's never picked it up. He continues to screw this up every single day, largely because he doesn't understand what's happening and listens to the wrong people. But he's also creating all kinds of competing power centers, none of which know what the others are doing, and enlisting people to carry out projects that are ill-though out and counter-productive.

The only reason anything is improving anywhere is because of the governors and local leaders and the average Americans who are doing the smart thing and staying away from other people. ...

Trump cannot learn. He does not believe he needs to learn. ... He believes he is a god and whatever he decides is automatically right because he is the one who is making it.

The literalness of those last three sentences is the key to understanding the severity of the danger in which the US finds itself. And yet it is difficult to truly assimilate it, because it is in such opposition to the workings of a rational mind:

The mainstream media has normalized Trump's behaviour since he declared his intentions to run for president and barely hinted at his obvious (and worsening) mental illnesses because once they do, there is no going back. So they pretend Trump is simply an opinionated man with his own way of doing things. Which is certainly true, but that fact tells maybe 3% of the story all Americans need to hear reported and repeated every single day.

Trump declared a national emergency one month ago. A lot of lofty promises were made on that day. Digby links to an NPR article that shows almost nothing has been done.


In a Rose Garden address, flanked by leaders from giant retailers and medical testing companies, [Trump] promised a mobilization of public and private resources to attack the coronavirus.

"We've been working very hard on this. We've made tremendous progress," Trump said. "When you compare what we've done to other areas of the world, it's pretty incredible."

But few of the promises made that day have come to pass.

NPR's Investigations Team dug into each of the claims made from the podium that day. And rather than a sweeping national campaign of screening, drive-through sample collection and lab testing, it found a smattering of small pilot projects and aborted efforts.

The remarks in the Rose Garden highlighted the Trump administration's strategic approach: a preference for public-private partnerships. But as the White House defined what those private companies were going to do, in many cases it promised more than they could pull off. ...

There is more testing than there was a month ago, but that's about it. And there is still not enough. ...

[Trump] said in a series of interviews that he does not need to read extensively because he reaches the right decisions "with very little knowledge other than the knowledge I already had, plus the words 'common sense,' because I have a lot of common sense and I have a lot of business ability."

Trump said he is skeptical of experts because "they can't see the forest for the trees." He believes that when he makes decisions, people see that he instinctively knows the right thing to do: "A lot of people said, 'Man, he was more accurate than guys who have studied it all the time.'"

Trump has also convinced himself that everyone can see "that he instinctively knows the right thing to do", that he is "more accurate" about everything than anyone else.

Simply by relying on the knowledge he already has, he is smarter than the experts who, for example, went to medical school for a decade and have studied infectious diseases for their entire adult lives. If people do not accept that reality, if they doubt Trump's infallibility, they are branded the enemy. They are "fake", "horrid", "nasty".

Dugby has also posted a terrifying article about South Dakota's Gov. Kristi L. Noem, who has refused to announce a statewide order to stay home, saying it reflected a "herd mentality". After all, she said, "South Dakota is not New York City." (Nooooooooo, it is not.)

And lo and behold. "But now South Dakota is home to one of the largest single coronavirus clusters anywhere in the United States, with more than 300 workers at a giant ­pork-processing plant falling ill. With the case numbers continuing to spike, the company was forced to announce the indefinite closure of the facility Sunday, threatening the U.S. food supply."

Noem is still refusing to protect the health of her state's residents. Yesterday, she touted the same unproven drug Trump has been pushing as a miracle cure, despite a complete lack of scientific evidence, and spoke excitedly about her conversations with presidential son-in-law Jared Kushner.


Instead of issuing a stay at home order she touts Jared giving her an untested drug that will do absolutely nothing to stop the spread of the disease. The "death cult" thing is not hyperbole. They are this close to Kool-Aid.