Instituting Distancing Guidelines In US One Week Earlier Would Have Saved 20,000 Lives; And Trump Gave Your Bank Permission To Steal Your $1,200 Stimulus Check

Every day of Donald Trump's delay in instituting distancing guidelines mean the death of hundreds of Americans.


During disease outbreaks, epidemiologists agonize about the timing and extent of interventions like social distancing to slow the spread. Their instincts are almost always to move sooner rather than later, because preventing new infections as early as possible can disrupt chains of transmission and save many lives.

Trump's instincts were, of course, to do the opposite.

If those guidelines had been put into effect two weeks earlier, an estimated 90% of the 33,300 deaths to date might have been prevented. (On March 2, there had been only 11 deaths in the US.)

Even putting those guidelines into effect one week earlier would have reduced deaths by 60%.

That's the real, human cost of trusting in Donald Trump during a national emergency.

Americans began dying of the coronavirus seven weeks ago. Trump has had some of the world's best experts on viral diseases on hand for all that time and he still has absolutely no clue about how viruses work. On April 10, he said "the germ has gotten so brilliant that the antibiotic can't keep up with it". First of all, it's not a germ, it's a virus (hint: it's in the name coronavirus). Second, antibiotics are useless against viral infections; they only work against bacteria.

As the US suffered the most deaths in a single day on Tuesday (2,407), then topped that total on yesterday (2,763), Trump announced (contrary to all available evidence) the virus's effect has peaked and the country should resume normal activities on May 1.

Trump's obsession with "reopening" the US (a misnomer as he never "closed" it) shows "his complete lack of understanding of what is required from a government during a pandemic": 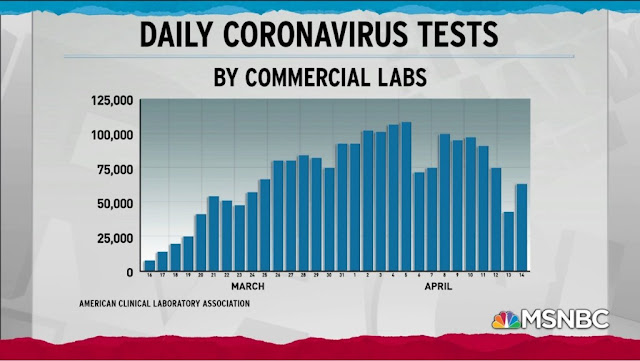 Ron Klain, the "ebola tzar" during the Obama administration, has remarked that Trump "is claiming a lot of powers he doesn't have and not using the one power he does have to get these tests made and distributed."

More tests would show more infections and Trump is terrified of that. He does not want the real scope of this pandemic to be known, because he will appear weak and ineffective. Yet his impatience and obsession with the economy will lead to more and more deaths, and a continually rising death toll does not generally act as a booster for that country's economy. But I have not gone bankrupt seven times, so what do I know?

Also: "Your Coronavirus Check Is Coming. Your Bank Can Grab It."


[T]he $1,200 CARES Act payments Congress approved in response to the coronavirus crisis ... may not make it into the hands of those who need it to pay bills, buy food, or just survive amid mass unemployment and widespread suffering. ... [Banks have] been given the power to seize the $1,200 payment and use it to pay off outstanding debt.

Congress did not exempt CARES Act payments from private debt collection, and the Treasury Department has been reluctant to exempt them through its rulemaking authority. This means that individuals could see their payments transferred from their hands into the hands of their creditors, potentially leaving them with nothing. ...

The Treasury Department effectively blessed this activity on a webinar with banking officials last week. [Hear the audio tape of the meeting here.]

Trump Fails At Everything:

Trump's attempt to prop up oil prices was front-page news a few days ago. So I'm surprised at how little attention is being given to the fact that it has been a complete bust pic.twitter.com/uizM31RVWp
— Paul Krugman (@paulkrugman) April 16, 2020