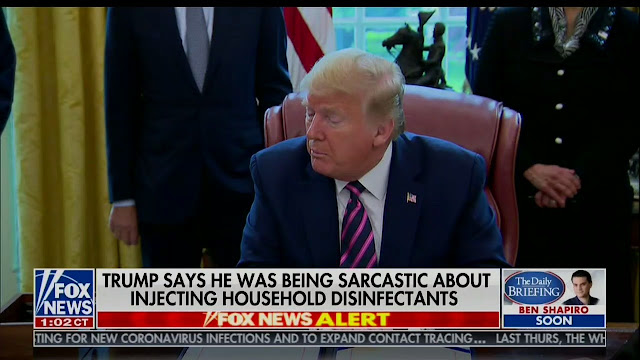 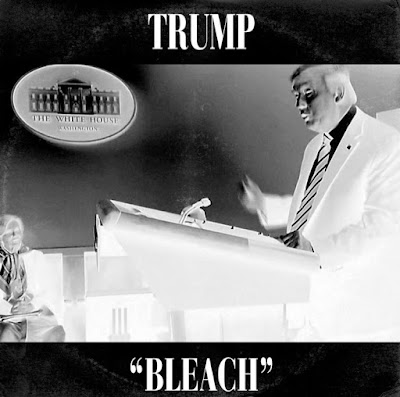 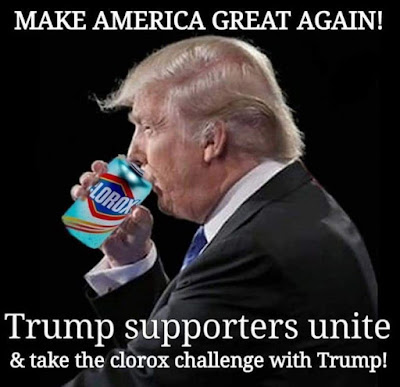 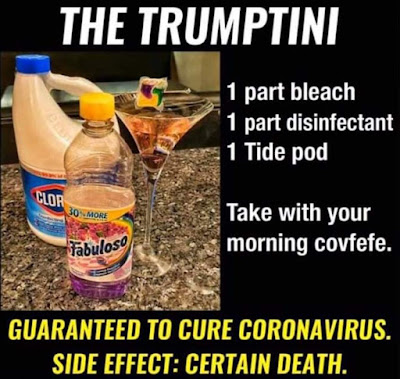 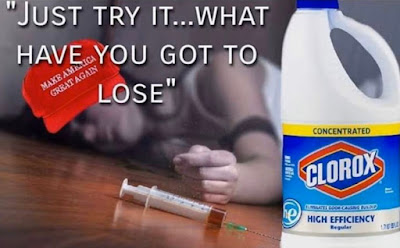 Here's a mashup of Trump claiming today he was just asking "a very sarcastic question to the reporters in the room" when he mused about disinfectant injections as a possible coronavirus miracle cure, followed by the original clip showing beyond a doubt that he was not doing that. pic.twitter.com/wby4ucd59Q
— Aaron Rupar (@atrupar) April 24, 2020

Trump, who yesterday mused about whether disinfectant "injection inside" the body could cure coronavirus, is now trying to say he was just musing about disinfectant products on hands pic.twitter.com/rIl8P4jzmG
— Aaron Rupar (@atrupar) April 24, 2020

TRUMP: I was looking at you yesterday when I was being sarcastic about disinfectants

JEFF MASON: I wasn't there yesterday

ANOTHER REPORTER: You were looking at Dr Birx

"I was asking a sarcastic, & a very sarcastic question, to the reporters in the room about disinfectant on the inside. But it does kill it." -- Trump tries to rewrite history, says he was speaking "sarcastically" when he mused about disinfectant injections being cure for Covid. pic.twitter.com/bWRU8EV6FZ
— Aaron Rupar (@atrupar) April 24, 2020

As you know, that is what he always says, when caught in something particularly insane, reckless, or preposterous.
— James Fallows (@JamesFallows) April 24, 2020

Ok, let’s say that it was: What is wrong with a person who would go on national tv to talk about a health crisis that has killed almost 50,000 people so far and make sarcastic comments like that? Either way, the President is a garbage person.
— Missy (@MissyInTheHouse) April 24, 2020

"A friend of mine -- a very sophisticated friend -- said, 'I never knew you had 184 countries.' We actually have more that.": Trump claims mid-rant that a friend of his was surprised to learn how many countries there are in the world pic.twitter.com/ayMKr8xH8t
— Aaron Rupar (@atrupar) April 24, 2020

"A friend of mine — a very sophisticated friend" = Trump is talking about himself.

Stolen from a friend-
“Y’all acting like you’ve never seen a 73 year-old drug addict wearing Depends and a dead ferret on his head stand at the WH podium and tell Americans to drink bleach and shine a light up their butts to kill a virus, six weeks into global pandemic, before”
— AUTISM: WHAT'S IT LIKE? (@bren2915) April 24, 2020

Despite her look of disbelief and horror at what Dolt45 says, Brix is a Loyal Always-Trumper.

• The insanity of what the President is suggesting;

• The fact that Dr. Birx et. al. are willing to humor him by saying they're going to test it;

• The silence of the entire Republican Party. https://t.co/hhrEizRwBP
— Howard A. Rodman (@howardrodman) April 24, 2020

Also, he presented this as a conversation he had already had with advisers (he does this frequently when he doesn’t understand something well enough to explain it; he just recounts dialog), so either his advisers told him NO and he ignored them, or they just nodded along.
— miss speech (@miss_speech) April 24, 2020

And every future press conference, for that matter.
— Mark In Victoria (@markinvictoria) April 24, 2020

And Now It's Time For Disinfectant Donnie!

Trump begins the April 24 #TrumpPressBriefing with this doozy: "We are opening our country and it is exciting to see. We have a lot of talent involved from governors down to people that just stand there and help you with the doors." pic.twitter.com/7e2yNSMi1m
— Aaron Rupar (@atrupar) April 24, 2020

"We will probably be sending [ventilators] to Germany should they need them" -- Trump wants people that believe that Germany, which has had 5,739 coronavirus deaths, somehow wants help from America, which has had 51,445 deaths pic.twitter.com/dzdgOpGCnO
— Aaron Rupar (@atrupar) April 24, 2020

This is a textbook case of gaslighting, in case you're confused about difference between it & lying. Pence's claims about testing aren't false -- they're presented in a misleading way. 5mil tests sounds like a lot, but the daily breakdown shows how little progress is being made. https://t.co/DnMSfmbamF
— Aaron Rupar (@atrupar) April 24, 2020

Pence also doesn't mention that the US promised 27 million tests would be available at the end of March.

it's endlessly embarrassing and saddening, how everyone -- including subject-matter experts and career public servants -- feels the need to tiptoe around Trump's idiocy/incompetence so they avoid running afoul of his mafia-like definition of loyalty https://t.co/HrGha3yt9h
— Samit Sarkar (@SamitSarkar) April 24, 2020

Wow. The briefing ends without Trump even taking questions. He must not have wanted to talk about the therapeutic properties of injecting household disinfectants. pic.twitter.com/7pxsoI7ANc
— Aaron Rupar (@atrupar) April 24, 2020

President Colorox ran off and refused to take any questions!

1/ I dove into the Trump media space to see how they're covering the Dr. Trump's disinfectant and UV light rant.

You'll be *shocked* that the gong farmers of the Trump media support squad are blaming...wait for it..."duh librual media."
— Rick Wilson (@TheRickWilson) April 24, 2020

3/ The hollow shell of conservatism in the post-Trump era is filled with nothing but cultlike adulation and hatred for the media.

It's because it polls through the roof with Trump voters and has forever.
— Rick Wilson (@TheRickWilson) April 24, 2020

4/ It's their vaccine against every lunatic blurting from Trump's lie hole. It's their safe space when his insanity is so patent.

Every time they run back to momma on the "but duh media is mean to Donald!" defense it illustrates their complete intellectual dishonesty.
— Rick Wilson (@TheRickWilson) April 24, 2020

5/ Any Trump defender in his media complex will, within a few tweets or paragraphs, almost always refocus on the Real Enemy; the media.

They can't stop themselves. It's the dying twitch reflex of people who used to have a standard for their own leaders on the right.
— Rick Wilson (@TheRickWilson) April 24, 2020

6/ I had a long Signal convo with a former friend in the right-leaning media space. Completely dug in on "it's the coverage, not Trump." After a lot of battering he admitted he can't blame Trump because their readers will turn on him and defect to some nuttier platform.
— Rick Wilson (@TheRickWilson) April 24, 2020

7/ In the mean time, don't drink bleach unless you want to show the media you're a real man.