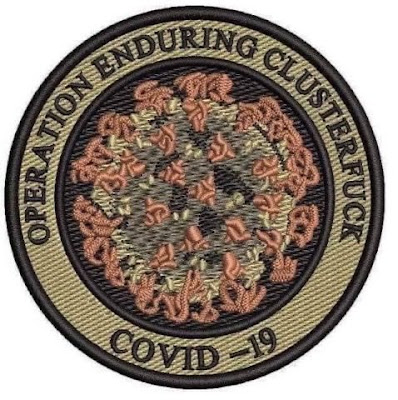 The federal government will end funding for coronavirus testing sites on Friday. While some sites will transition to being state-managed, others will close as a result. This as criticism continues that not enough testing is available.https://t.co/DuBCbJoRDO
— All Things Considered (@npratc) April 8, 2020

The Trump administration is pulling back federal support of testing sites by the end of the week, according to the Federal Emergency Management Agency, amid ongoing concerns over testing shortages nationwide. https://t.co/FH7y5IFpAe
— CNN (@CNN) April 9, 2020

A total of 16 million Americans have lost their jobs in the last three weeks.

That is slightly more than 10% of the country's workforce.

The US economy just lost nearly twice as many jobs in three weeks as it lost in the entirety of the Great Recession.

This is a catastrophe and it won't stop until we stop the pandemic. Americans will need sustained support from their government to get through this crisis. https://t.co/S4XBiNCCmp
— Rep. Don Beyer (@RepDonBeyer) April 9, 2020


Okay, that's bad, but there are bigger things to worry about ... like Trump's TV ratings!


From @WSJopinion: The President’s outbursts against his political critics are notably off key at this moment. This isn’t impeachment, and Covid-19 isn’t shifty Schiff. It’s a once-a-century threat to American life and livelihood. https://t.co/gXmNvL6vk2
— The Wall Street Journal (@WSJ) April 9, 2020

The Wall Street Journal always “forgets” to mention that the ratings for the White House Press Briefings are “through the roof” (Monday Night Football, Bachelor Finale, according to @nytimes) & is only way for me to escape the Fake News & get my views across. WSJ is Fake News!
— Donald J. Trump (@realDonaldTrump) April 9, 2020

It’s so demoralizing that we have a “President” who is so proud that his ratings are through the roof when 799 New Yorkers literally died in one day. He literally thinks this is a reality TV show called Trump Pandemic competing with Monday Night Football and the Bachelor Finale.
— Eugene Gu, MD (@eugenegu) April 9, 2020

Trump on message to 16mil who lost jobs: "I think the economy is going to do very well. That's just my feeling ... I've had good, proper feelings about a lot things over the years. It looks like we're at the lower end of the curve in terms of death, which is a terrible dark word" pic.twitter.com/5NMnrcMc63
— Aaron Rupar (@atrupar) April 9, 2020


He's never had even one "good, proper feeling" in his entire wretched existence.


He campaigned about having the best memory but can't remember if someone briefed him on a pandemic which had estimates of 2.2 million deaths. Hmmm
— Bret (@whyamidoingtwtr) April 9, 2020

Trump isn’t a leader, he never was, just an incompetent sociopath. New Zealand crushed the COVID-19 curve with only one death. This is how it is done in a country with a real leader. https://t.co/7MEFzWKXNs …
— Orrite Then (@OrRite_Then) April 9, 2020

“The US now accounts for nearly one-quarter (~25%) of global DAILY DEATHS.”

More Americans died this week from COVID-19 than in the entire Iraq War and it is only Thursday. https://t.co/uEQTkeSixt
— Rep. Don Beyer (@RepDonBeyer) April 9, 2020

TRUMP'S WAY OF KEEPING THE CORONAVIRUS FROM SPREADING IS TO REFUSE TESTING PEOPLE. IF YOU DON'T TEST THEM, THEN THEY DON'T HAVE IT UNLESS THEY DIE OR NEED INTENSIVE CARE. BY THEN IT MAY BE TOO LATE TO SURVIVE. READ THIS FIRST-HAND ACCOUNT OF THE#TrumpVirusCoverup 02 pic.twitter.com/r0CUt7g5gZ
— Tomthunkit™ (@TomthunkitsMind) April 9, 2020

REPORTER: Some experts, including Scott Gottlieb, talked about 750,000 tests per week being needed before the economy is open. Do you agree with those numbers?

President Trump said that there have been more than two million coronavirus tests conducted in the United States, but conceded that mass testing is not going to happen https://t.co/XaLcHXIMIP
— CNN (@CNN) April 10, 2020

A weeks-long testing delay that effectively blinded public health officials to the spread of the coronavirus in the US might have been avoided had federal agencies fully enacted their own plan to ramp up testing during a national health crisis https://t.co/mQGFKk8i8C
— CNN (@CNN) April 9, 2020

Donald Trump is once again boasting about his semi-ban on travel from China. But airlines suspended flights before he did. https://t.co/lKiLYj5eNm
— Mother Jones (@MotherJones) April 9, 2020

Only 11.7 million N95 respirator masks have been distributed nationwide.

Only 7,920 ventilators have been distributed.

90 percent of the federal stockpile has been depleted. https://t.co/RsDC3CQlAF
— Mother Jones (@MotherJones) April 9, 2020

Here’s AG Bill Barr telling Laura Ingraham that at end of April he thinks the current “draconian measures” should be re-evaluated because we should “allow people to adapt more than we have, and not just tell people to go home and hide under their bed” pic.twitter.com/unQh6xXbdM
— Aaron Rupar (@atrupar) April 9, 2020

Unless the network airs Trump’s rally-briefings in full, the public won’t hear from the people who actually know what they're talking about https://t.co/2NDKpGkbsw
— VANITY FAIR (@VanityFair) April 9, 2020


Supporters turn on Trump for ‘flat-out lying’ about coronavirus: ‘He’s got no idea what the hell he’s doing’ https://t.co/JAR6mKoOrI
— Raw Story (@RawStory) April 9, 2020

Will Trump and his enablers ever face accountability for the coronavirus massacre?

"There ought to come a time for a tallying: who did what when, during a life-and-death national crisis…None of this should be forgotten," writes @DavidCornDC. https://t.co/88X7Uxjk25
— Mother Jones (@MotherJones) April 9, 2020