Trump Signs Executive Order For A Statue Of Hannah Arendt, A German-Born Political Theorist Known For Her Writings On Power, Evil, And Totalitarianism ("Violence Always Rises Out Of Impotence") In The "National Garden Of American Heroes"

Each individual has been chosen for embodying the American spirit of daring and defiance, excellence and adventure, courage and confidence, loyalty and love. 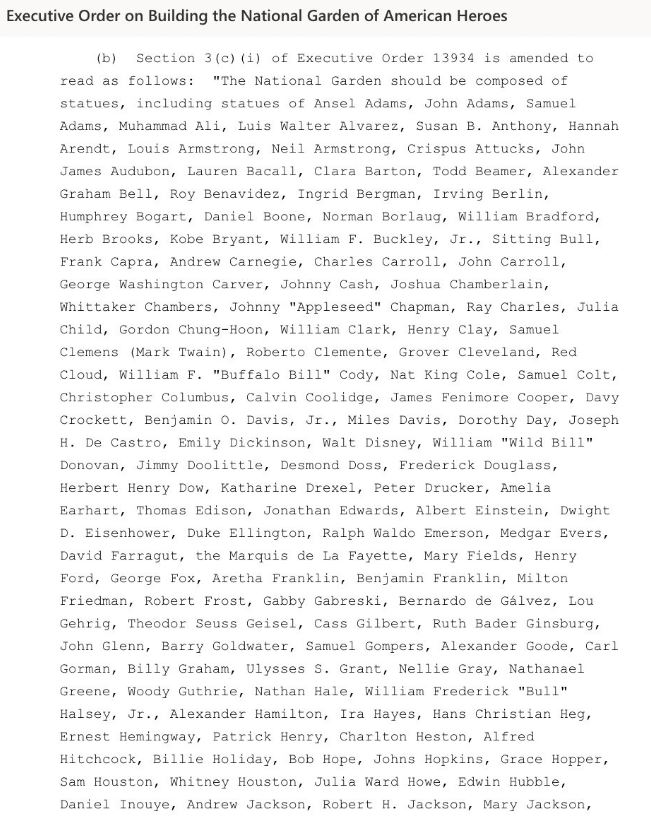 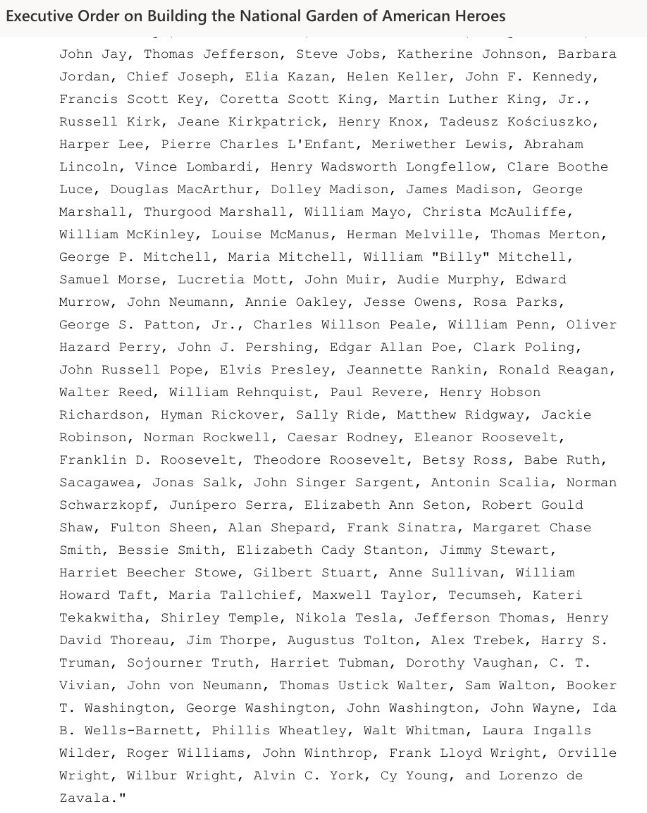 Several people in that list, such as Christopher Columbus, the Marquis de La Fayette, and Lorenzo de Zavala, were not American, but have some connection to America, whether through myth, infamy, or some other reason. The one name everyone is commenting on is Hannah Arendt, whose extensive writings on totalitarian leaders and systems include this line:

Before mass leaders seize the power to fit reality to their lies, their propaganda is marked by its extreme contempt for facts as such, for in their opinion fact depends entirely on the power of man who can fabricate it.

Grover Cleveland is an interesting choice, since he is the only US president to serve two nonconsecutive terms (1885-89 and 1893-97). And on January 21, 2025, he will still be the only president to have that distinction.
There are 244 names on the list. If you asked Donald Trump "Who is [name on list]?", how many do you think he could identify and briefly describe? If I said 25, would you take the over or the under?
Posted by allan at 11:46 PM

You haven't included links to any sources. I googled to find it. No mention of Woody Guthrie writing a song excoriating Daddy Trump?

Also, there is no way on earth that DT could describe 25 people on this list.

The one I can't get over is Dorothy Day--pacifist, activist for the poor, anarchist, socialist (when those last two terms actually meant something scary enough to panic Main St).

How unhappy she would be to be included in Trump Garden!

Did no one tell him that Woody Guthrie wrote a song about Fred Sr--'Old Man Trump'?

Surprised that Eli Whitney is not named. He probably did more to keep slavery alive--unintentionally--than all Jeff Davis's generals combined.

Medgar Evers, but not Emmett Till, John Lewis, Chaney/Goodman/Schwerner.

Harper Lee and LI Wilder but not JD Salinger or Joseph Heller.

Johnny Cash but not Jimmie Rodgers or Hank Williams or Bill Monroe.

Elvis but not Thomas A Dorsey? This list veers between the obvious, the absurd, the insulting, and the mindless--kinda very Trumpy.

A few ballplayers but unless my eye missed something, none from the Negro Leagues, except Robinson, not the obvious Josh Gibson or Satchel Paige. And Hank Aaron doesn't rate?