Among The Numerous Unhinged, Seditious, Nonsense-Spouting, Reality-Denying Clowns In The Republican Death Cult Calling For The Mass Execution Of Fellow Lawmakers, Marjorie Taylor Greene Stands Out ("A One-Stop Shop For All Things Insane")

Update: More silliness and garbage from the person who (a) called a school shooting survivor a "coward" for ignoring her questions and (b) threatened to have a reporter arrested because she wanted to ignore her questions:
In February 2019, she claimed that then-Supreme Court Justice Ruth Bader Ginsburg had been replaced by a body double, the theory being that she had allegedly died and Democrats decided to trick everyone by using a doppelganger (but for a dead person) to retain her Supreme Court seat. (This subterfuge apparently completely fooled the other eight Justices, several of whom I assume would have been more than happy to blow the whistle. Also, why would the Democrats announce her death with Trump still in office? Why didn't they wait a few months until Biden could fill the seat? And why am I wasting time thinking about this brain-rotting shit?)

SCOOP: In a pre-election video just uncovered by Mother Jones, Republican Marjorie Taylor Greene is seen endorsing political violence. “The only way you get your freedoms back is it’s earned with the price of blood," she says. More here: https://t.co/GcXZQY0K30 pic.twitter.com/lSA6JUeWjM

If she commits a mass shooting in congress, none of us will be shocked.

We are witnessing the same warnings signs, ref flags and behavioral problems that go unheeded in our history of mass shootings, OKC bombings and domestic terrorist attacks.

Why hasn't anyone made a bigger issue out of the fact that the only reason she ended up running unopposed it because her opponent was receiving death threats??? 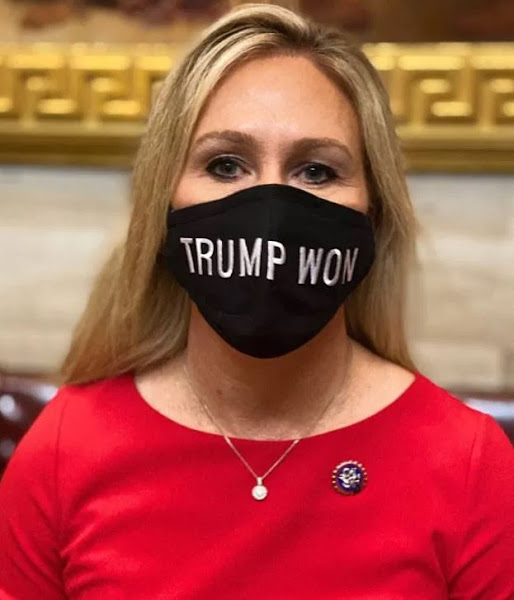 was one of the 147 representatives who committed sedition on January 7, 2021, by rejecting and attempting to overthrow the results of the 2020 presidential election

said (July 2020) "children should not wear masks" during the pandemic that has killed nearly 450,000 Americans (and infected more than 25 million) in less than a year

believes the "QAnon" conspiracy is real (stating in 2017 the theory was "worth listening to", adding: "There's a once-in-a-lifetime opportunity to take this global cabal of Satan-worshiping pedophiles out, and I think we have the president [Trump] to do it."

wrote (in 2018) that the Marjory Stoneman Douglas High School shooting in Parkland, Florida, was a hoax

stalked (live-streamed in March 2019, posted to YouTube in January 2020) David Hogg, a survivor of the Parkland shooting, a founding member of "Never Again MSD", and one of Time magazine's 100 Most Influential People of 2018, taunting him and accusing him of participating in a hoax (she has also called him a "coward" and "#littleHitler")

ejected WRCB-TV reporter Meredith Aldis from a town hall event (January 27, 2021) and threatened her with arrest for asking a question about the video showing Greene harassing Hogg

wrote (in 2018): "I am told that Nancy Pelosi tells Hillary Clinton several times a month that 'we need another school shooting' in order to persuade the public to want strict gun control."

stated (in 2018) that militia groups were "the very definition of our Second Amendment. . . . [W]e're guaranteed the right to bear arms and make a state militia so that they do not run us over."

stated (in 2020) she would never support a law making it harder for people to possess guns ("the government will never tell me how many guns I can own, and how many bullets I am allowed to fire")

shared (in 2018) a video ("With Open Gates: The Forced Collective Suicide of European Nations") outlining the anti-Semitic claim that "Zionist supremacists" want to flood Europe with immigrants to outnumber the "native" white populations in "the biggest genocide in human history" (Greene: "This is what the UN wants all over the world.")

repeated (in November 2018) the anti-Semitic belief that the deadliest fire in California history was caused by a "space laser so California could build a high speed rail system" (with the involvement of Rothchild Inc.)

stated: "The most mistreated group of people in the United States today are white males."

stated that Black Americans are "slaves to the Democratic Party"

stated (in 2018) that the election of Ilhan Omar and Rashida Tlaib to Congress was part of "an Islamic invasion of our government" (her campaign videos in 2019 and 2020 contained numerous racist, anti-Semitic, and Islamophobic statements)

stated (in February 2019) her intention to force Omar and Tlaib, who took their oaths of office using Qurans, to retake their oaths on Bibles. She implied there was a law requiring it, which is completely wrong. Article VI of the Constitution states "no religious test shall ever be required as a qualification to any office or public trust under the United States".

accused Omar of marrying her brother so he could gain US citizenship
posted (September 2020) an image of herself holding a rifle beside photos of Reps. Omar, Tlaib, and Alexandria Ocasio-Cortez, vowing to "go on the offense" against her future colleagues

stated (in 2017) that Nancy Pelosi's sympathy for undocumented immigrants and opposition to Trump's border wall made her guilty of treason, "a crime punishable by death"

expressed support (in 2018 and 2019) for the execution of numerous Democrats, including Barack Obama, Hillary Clinton, John Kerry, Nancy Pelosi, and any FBI agents who refuse to do the bidding of Donald Trump (in April 2018, she wrote: "Stage is being set" for the hanging of both Obama and Clinton; in 2019, she liked a comment on her Facebook page proposing "a bullet to the head" would be a quick way of getting Pelosi out of office) (Greene also self-identifies as a Christian)

believes Seth Rich, a member of the Democratic National Committee, was murdered on orders from Barack Obama (Fox News agreed to pay millions of dollars to Rich's family to compensate them for false conspiracy claims made by Hannity et al.)

filed articles of impeachment against President Joe Biden on January 21, 2021 (his first full day in office), alleging abuse of power

was locked out of her Twitter account for 12 hours on January 17, 2021 "for multiple violations" of the platform's civic integrity policy. Upon her return, Green told Twitter: "Contrary to how highly you think of yourself and your moral platitude, you are not the judge of humanity. God is."

is now a member of the House Education and Labor Committee (Charles P. Pierce, Esquire: "She's a one-stop shop for all things loony. She's a utility wingnut.")

Greene is also scrubbing her Facebook of old posts and videos from 2018 and 2019 where she spread conspiracies and endorsed violence against Democratic lawmakers. pic.twitter.com/3HoVGU2VZR

The more I investigate Marjorie Taylor Greene, the worse it gets. Greene must be expelled immediately. https://t.co/XqEZxHJfZG

Kevin McCarthy assigned Marjorie Taylor Greene to the Education Committee even after she called the Parkland School Shooting a hoax. Absolutely disgraceful.

I really feel like Marjorie Taylor Greene's extreme anti-Semitism gets lost in the discussion of her broader seditious nuttiness. If Ilhan Omar ever said anything like this -- which she wouldn't -- every Democrat would have to answer for it. https://t.co/xxcpDw6HDO

GOP conspiracy theorist and sociopath Marjorie Taylor Greene, who should already have been ejected from Congress and charged with sedition, has cops throw reporter out of Town Hall for daring to ask a question. https://t.co/PfcH56aFCx

She is exactly the Republican Party.

I'm starting to get a bad feeling about this Marjorie Taylor Greene person, you guys.

Which all leads to the very disturbing question - Who actually voted for this piece of Scum ? And what it says about them ......

Basically, Idiots & Morons have been radicalised & weaponised by a bunch of GOP Cranks & those who chose not to do anything have now woken up ( somewhat ) to the horror show they have enabled.

I actually believe that on January 6th, simply put, not ENOUGH people died.

Had 50-500 or more died then this Cancer might be removed, Action might be taken & until a "significant number" of people die, I don't think anything will change.

So America is STILL sleepwalking towards another National Tragedy.

I have been thinking for years a major Assassination is "well overdue" - I actually expect it will occur in 2021 - the question is who & how many & will it change anything ?

Sadly, the answer to the last question might be that it crazily makes things worse.