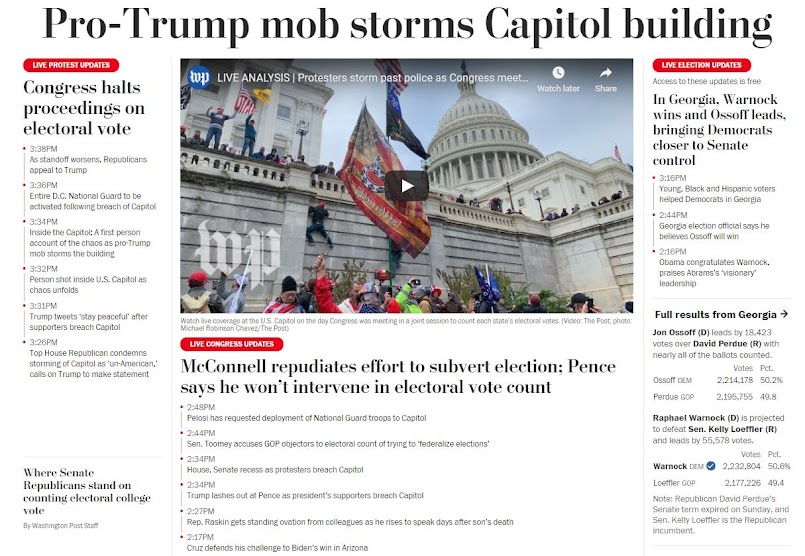 Chris Wallace of Fox News: "What we're seeing today, people need to understand how utterly unprecedented it is. For the last hour, we've heard the sitting POTUS refuse to concede & say that he will never accept the results of an election... the POTUS is making up stories." pic.twitter.com/8VTg7PZG4j

Mitch McConnell: "Nothing before us proves illegality anywhere near the massive scale that would've tipped the entire election. Nor can public doubt alone justify a radical break when the doubt itself was incited without any evidence." pic.twitter.com/fAdJZ571Qs

"The voters, the court, and the states have all spoken. If we overrule them, it would damage our republic ... if this election were overturned by mere allegations from the losing side, our democracy would enter a death spiral" -- McConnell pic.twitter.com/uVLpnqS0TK

He's trying to save himself, don't get it twisted people. One speech does not clear over 30 years of the past.

President Trump explicitly told these people to go to the Capitol at the end of his speech. https://t.co/3fsiC0F0yk

Ted Cruz makes an argument for an "emergency electoral commission" but doesn't cite any evidence of irregularities beyond Trump supporters' (unfounded) suspicions pic.twitter.com/7SKDZhNC4J

Protesters have breached the Capitol. They’re outside the Senate chamber pic.twitter.com/I021tKliUD

Let's say it. The President intentionally and explicitly demanded a violent mob storm the center of government to force legislators to keep him in office in defiance of the constitution and the will of the country's voters.

Police officers are holding them steps away from the Senate chamber, which is locked. Senators are inside. I see a few confederate flags. pic.twitter.com/YI7X7KmuUG

"Protesters are in the building" -- the Senate is abruptly brought into recess pic.twitter.com/ZkobZyjYw1

The Capitol is locked down with lawmakers inside pic.twitter.com/fVdpgkirtz

Some sort of gas has been set off. I’m not sure by whom. Police seem to be trying to deescalate and talk to them. pic.twitter.com/CwB2PYdTMj

Pro-Trump protesters are now inside the US Capitol pic.twitter.com/0r2EQmcFUD

That’s the confederate flag flying outside the Senate chamber pic.twitter.com/1XB5TlAsuv

"the mob has overtaken the process ... security here at the US Capitol has failed" pic.twitter.com/f01D6ZlukK

Jake Tapper describes what's going on at the Capitol as "a bloodless coup" pic.twitter.com/17D0Ns1FIA

"We are just waiting to see when law enforcement shows up and in what kind of numbers. Because right now, I can tell you, they don't have the numbers here to deal with this crowd" pic.twitter.com/MztLbmxIKT

"there are discussions about evacuating the vice president" pic.twitter.com/v7rjyyJcjH

Rep. Michael Waltz (R) tells Fox News "we're now being evacuated ... this is despicable. This is now who we are as a country." pic.twitter.com/1QqJnRJWRj

Protesters are on the third floor of the Senate, walking door to door, shouting “Where the fuck are they?”

They’re in the gallery pic.twitter.com/3v4XsPWl5o

.@Acosta says Trump "is essentially watching the world burn" and "should be going into the briefing room and telling these protesters to stop and go home. He is not doing that. That's makes him responsible for what's happening right before our eyes." pic.twitter.com/9KmWqrBV4F

They’re in the chamber. One is up on the dais yelling “Trump won that election!” This is insane pic.twitter.com/p6CXhBDSFT

BREAKING—Teargas released inside US Congress’s inner Rotunda to stop MAGA insurgents who have breached the building. Members of Congress told to wear their assigned gas masks.

Now the Republicans finally #MaskUp when US Congress has been stormed and penetrated.

"there is an armed standoff at the House front door" pic.twitter.com/lRnPdIgW0o

Martha MacCallum on Fox News: "These people were told to that today was going to overturn the election. And when you hear the passion in their voices, you can understand why they are severely disappointed." pic.twitter.com/702nvjQPQa

BREAKING: A source tells me The Defense Department has just denied a request by DC officials to deploy the National Guard to the US Capitol.

Several people got on to a scaffolding outside Senate, took it to second floor, which looked like the area where McConnell’s office is located, and started banging on windows pic.twitter.com/IIZ21nkzFT

"The president's tweets have been insane ... this is nothing short of an attempt to take over the government" -- @RepKinzinger pic.twitter.com/mp0kdMLE3I

When the Capitol is cleared and secured, and the joint session of Congress and the electoral vote count is completed, the House and the Senate should proceed immediately to the impeachment and removal of @realDonaldTrump.

Then the president yelled at staff that he didn't like the way the rally looked. Then he went back to the White House, where he's been and refusing to denounce the violence.

Republican Rep. Mike Gallagher: "I haven't seen anything like this since I deployed to Iraq ... this president needs to call it off. It's over. The election is over." pic.twitter.com/TMj0FhYhlX

"He needs to stand up and say, 'I lost the election.'" -- @RepKinzinger pic.twitter.com/1TPn0gMvhO

If those assholes looked like me they woulda been dead three times over before they got a mile from a Capitol balcony.

Black Americans are murdered for jogging in white neighborhoods—meanwhile white Trump supporters have just raided THE WHITE HOUSE and everyone is still standing-
It’s a civil war yet cops r “nice” to whites? pic.twitter.com/l6zSyR13RO

I just keep thinking back to the suppression of peaceful Black Lives Matters protestors by paramilitary police outside the White House last summer. The gassing. The beating of journalists. And then this. No defence against a violent organised assault on the Capitol building ... https://t.co/r8vS4YuW94

BREAKING: The entire D.C. National Guard will be activated today, putting about 1,100 guardsmen on duty tonight, defense official tells me. Comes after breach of Capitol by pro-Trump protesters.