25th Amendment Discussed, As Aides Describe An Enraged Trump Acting Like "A Total Monster"; In Recent Days, He Has Expressed Anarchist Comments In Private

President Trump was decamped in the White House residence Wednesday night, raging about his perceived betrayals, as an array of top aides weighed resigning and some senior administration officials began conversations about invoking the 25th Amendment — an extraordinary measure that would remove the president before Trump's term expires on Jan. 20.
A deep, simmering unease coursed through the administration over the president's refusal to accept his election loss and his role in inciting a mob to storm the Capitol . . . One administration official described Trump's behavior Wednesday as that of "a monster," while another said the situation was "insane" and "beyond the pale." . . .
People who interacted with Trump on Wednesday said they found him in a fragile and volatile state. He spent the afternoon and evening cocooned at the White House . . . "He's got a bunker mentality now, he really does," the close adviser said. . . .
Trump resisted entreaties from some of his advisers to condemn the marauders and refused to be reasoned with. "He kept saying: 'The vast majority of them are peaceful. What about the riots this summer? What about the other side? No one cared when they were rioting. My people are peaceful. My people aren't thugs,'" an administration official said. "He didn't want to condemn his people."
"He was a total monster today," this official added . . .
White House aides tried to get Trump to call into Fox News Channel, but he refused. He at first did not want to say anything, but was persuaded to send some tweets. Then they scripted a video message for him to record, which he agreed to distribute on Twitter. But the president ad-libbed by including references to false voter fraud claims that they had asked him not to include . . . Twitter later locked his account, enraging the president. . . .
"He's so driven by this notion that he's been treated unfairly . . ."
This official described Trump as so mad at Pence "he couldn't see straight." . . .
A former senior administration official briefed on the president’s private conversations said: "The thing he was most upset about and couldn't get over all day was the Pence betrayal. … All day, it was a theme of, 'I made this guy, I saved him from a political death, and here he stabbed me in the back.'" . . .
Another former senior administration official [said Trump] "acted like a toddler" . . .

"They're Being Told To Stay Away From Trump": After A Day Of Violence And 25th Amendment Chatter, Trump's Allies Are Jumping Ship
Gabriel Sherman, Vanity Fair, January 7, 2021

As the violent mob incited by President Donald Trump stormed the U.S. Capitol on Wednesday . . . White House Counsel Pat Cipollone was urging White House officials not to speak to Trump or enable his coup attempt in any way, so they could reduce the chance they could be prosecuted for treason under the Sedition Act. . . .

Trump is increasingly isolated and alone. According to a person close to the White House, Trump refused to take calls on Wednesday from business leaders who wanted him to call off the insurrectionists. . . .

In recent days, as Trump's bid to overturn the election became increasingly desperate, he expressed anarchist comments in private, a second Republican close to the White House told me. The Republican said Trump told people that he wanted David Perdue and Kelly Loeffler to lose the Georgia Senate runoff election as a way of punishing them and Mitch McConnell. . . . According to the Republican, Trump has said he'll be the most dominant force in Republican politics if there's no party leadership. . . .

"He'll want to burn the whole thing down," a Republican strategist said. "Trump doesn't give a shit about anyone but himself. . . . Everyone is blaming Trump for Georgia. When Trump took office, we had the White House and both branches of Congress. Now we have nothing. He inherited a Lamborghini and treated it like a lawn mower."

Every single Democrat on the House Judiciary Committee wrote to Mike Pence asking to invoke the 25th Amendment to remove Trump.https://t.co/BqzcuGTM5o via @politicususa

There have been informal discussions about invoking the 25th Amendment among staff-level officials within the Trump admin., multiple sources familiar with the matter tell NBC News.

It’s unclear if Cabinet-level officials have discussed the matter. https://t.co/7o48PIsdPY

From colleague John Roberts: A well-placed source tells me there is talk swirling among Republicans in Congress of a possible 2nd impeachment proceeding - and conviction against Trump - to insure he can’t run for re-election.

Trump caused the assault on the Capitol. He must be removed. https://t.co/ZPHJGvmdTP pic.twitter.com/T9wqtBwJBx

Cedar Rapids Gazette is on it: https://t.co/o2ZMkhxPrv

The Republican governor of Vermont calls for Trump to resign or be removed from office. https://t.co/hVga7MaUvh

"That's something we need to look at ... that's a conversation that will happen tomorrow morning." pic.twitter.com/IIOSMu3dS7

NEW: Assistant Senate Democratic leader @PattyMurray calls for Trump to be removed via the 25th amendment.

"The most immediate way to ensure the President is prevented from causing further harm in coming days is to invoke the 25th Amendment and remove him from office." pic.twitter.com/hmSG5YTQdi

Let me be very clear: if all we do is accept the certified Electoral College results and go home, we would have failed our country. We must impeach Trump, or have the 25th Amendment execute, or have @realDonaldTrump resign. Congress cannot just go home like nothing happened. https://t.co/aNBgiqwr7g

The @VP must invoke the 25th Amendment.

Agree with Cong Pramila Jayapal. Trump is leading a criminal coup against the Constitution. He is illegally suggesting Congress overturn an election. This is a danger to our democracy. He should be removed from office by impeachment or the 25th Amendment. https://t.co/wcc4AJYgd2

WATCH: "This is shocking," @davidcicilline told us in a live interview on @wpri12 a short time ago.

"These are not patriots. These are domestic terrorists. They're extremists," he says. He's called for either Pence to invoke the 25th Amendment or Trump to be impeached. pic.twitter.com/nFZAlE9WdV

DC Attorney General @AGKarlRacine calls for Trump’s removal from office: "I have called earlier today for invocation of the 25th Amendment... Let's give Vice President Pence two weeks of Presidency and get Donald Trump out tomorrow." pic.twitter.com/hAnpeyL1Sh

Former GOP Rep. Denver Riggleman tells me he believes the cabinet should invoke the 25th amendment and remove the president.

BREAKING: “The 25th Amendment allows for the removal of a President. It’s time to remove the President,” says U.S. Rep. @CharlieCrist, D-St. Petersburg.

Crist is a former governor of Florida. https://t.co/1i3K89mv2X

“Certainly the 25th amendment is there...I never thought it might occur in my lifetime,'' noted presidential historian Douglas Brinkley says on @CNN. But "Trump is acting and thinking in an irrational way.''

The National Association of Manufacturers is the largest manufacturing association in the United States, representing small and large manufacturers in every industrial sector and in all 50 states. It's suggesting Pence invoke the 25th Amendment. https://t.co/lG64cNl8pC 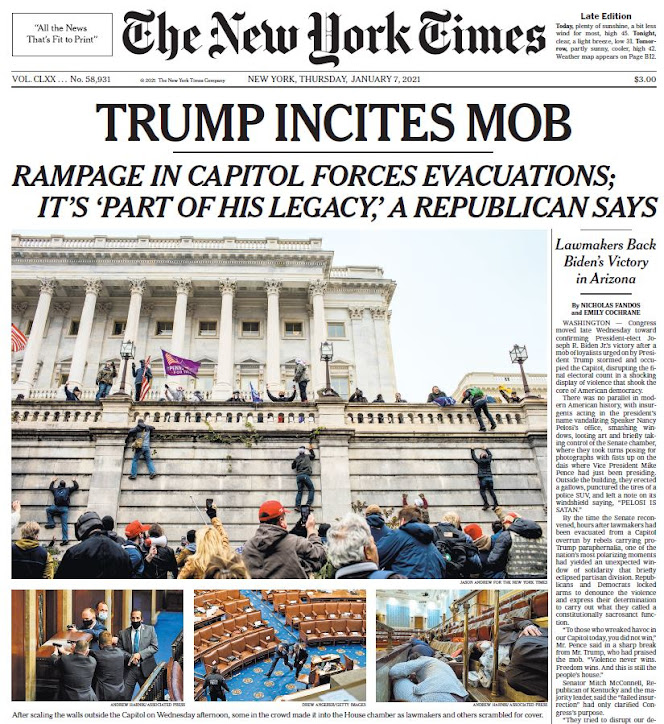 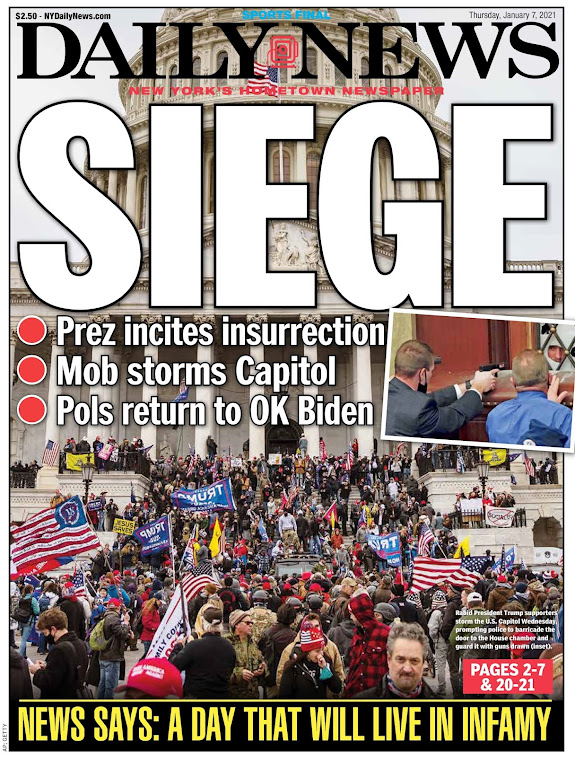 In 2016 Trump responded to a mass shooting that killed 50 people by tweeting "appreciate the congrats." He has never even tried to hide that he's a reprehensible human being. https://t.co/1mSpneOrbI

Rudy is ramping up his behind the scenes treason support, and his goal is delaying tonight's electoral vote count in Congress. https://t.co/oEyUYSzUSP

The terrorism is coming from inside the White House. #ImpeachTrump pic.twitter.com/4D5aTabscc