MAGA Mob Still Chilling Around The Capitol (Cops? What Cops?) As Dusk Approaches 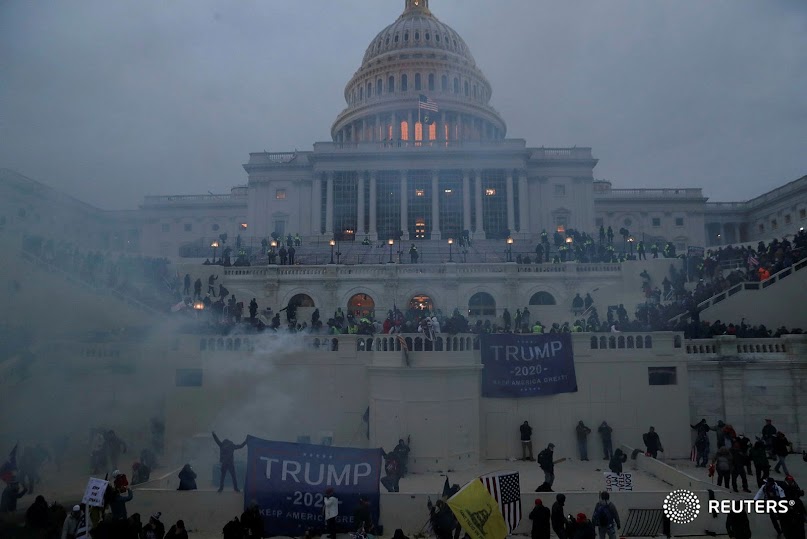 Wednesday was a horrifying and shameful moment in American history. I've covered attempted coups in many countries around the world, and now I'm finally covering one in the United States. . . .

Many of those pro-Trump rioters probably dispute the idea of white privilege. But the fact that they were allowed to overrun the police and invade the Senate and House chambers was evidence of that privilege. . . .

In Portland, Ore., last summer, I saw federal authorities periodically use tear gas even against protesters who were peaceful and outside — so it was astonishing to see waves of protesters overrun the Capitol with almost no response. . . .

I don’t get how these people are still wandering around. I was in a House meeting room during Summer 2006 when there was a supposed active shooter (ended up being the sound of a construction crew) in a garage and the entire complex was locked down tight within 10 minutes.

White American privilege at its finest...

This is the incitement earlier today that led to the violent insurrection against the government of the United States. https://t.co/wiCp0gLo1G

I know your pain, I know your hurt. We had an election that was stolen from us. It was a landslide election, and everyone knows it, especially the other side, but you have to go home now. We have to have peace. We have to have law and order. We have to respect our great people in law and order. We don't want anybody hurt. It's a very tough period of time. There's never been a time like this where such a thing happened, where they could take it away from all of us—from me, from you, from our country. This was a fraudulent election, but we can't play into the hands of these people. We have to have peace. So go home. We love you. You're very special. You've seen what happens, the way others are treated—so bad and so evil. I know how you feel, but go home and go home in peace.

The video has been deleted from Trump's Twitter feed. Facebook deleted the video from its platform.
Updates:

The woman who was shot earlier has died.
Five other people were taken to hospital.
At least one pipe bomb was found on the Capitol grounds.

"Don't back down guys!" One person yells. A large chant of "Trump Won, Trump Won" breaks out.

The "fuck Antifa" chant is quite something right about now.

One guy goes right up to the police and yells "I'm a mother fucking proud boy!" The crowd seems to have decided that the police are now ANTIFA.

"You're defending the Communist Chinese Party right now I hope you know!"

A bunch of Associated Press equipment had to be abandoned and a crowd is trashing it. "We are the news now!" a man yells. Looks like they're going to try to light it on fire. pic.twitter.com/3GPNcUlDeC

The president spent much of his speech today attacking the press, his supporters are now responding. Disgusting. https://t.co/bKdpoyjMAw

a real shame they didn't have a perfect excuse to wear a mask while committing these crimes....

The police have a perimeter set up. People are throwing stuff at the line. Tensions pretty high. People were screaming at one guy because they thought he was from the Washington Post (he was not.) pic.twitter.com/kivFLJssJS

I've been to Trump rallies and never had any problem going up to people, identifying myself, and asking for an interview. A couple rude responses but mostly people were happy to talk.

They just told the crowd that they need to leave because they're in violation of curfew. Police now advancing again. They want to shut this down.

Via Getty, one the rioters steals a podium from the Capitol pic.twitter.com/V4spojl40q

@janemarielynch His name is Adam Johnson. He lives in Bradenton, FL. Went to Lakewood ranch baptist church back when I knew him. His wife Suzi is a doctor. He mocked BLM protests online for months. Hypocrite and criminal.

How about the same outfit? pic.twitter.com/Y6X5iohA5D

You had two explicitly pro-coup candidates on the ballot for senate just fucking yesterday. https://t.co/oHf5toeST0

You collaborated with him every step of the way. Did you think it wouldn't end this way? https://t.co/Bwt1ZkmNMZ

Sen. Graham: "I support peaceful protests but not violence and destruction. People need to leave the Capitol now! This is a national embarrassment."

Former AG Barr: “The violence at the Capitol Building is outrageous and despicable. Federal agencies should move immediately to disperse it.”

This is not MAGA. We are not ANTIFA and the left. We should do it the correct way, leave the Capital and Stop!

The world is laughing at us. Live to fight in elections in the future. Save this country by growing our base and winning elections.

Ivanka Trump: "Any security breach or disrespect to our law enforcement is unacceptable. The violence must stop immediately. Please be peaceful."

If you were really excited about all the gasoline being spread around you don't get to be outraged when the match gets lit. https://t.co/zJwfZVDjaB

Martha MacCallum offers apologia for the Trump mob: "You cannot put a broad brush across all of these people and their concerns." pic.twitter.com/tkFuGSlI66

Lou Dobbs defends insurrectionists at the U.S. Capitol: They "were walking between the rope lines" https://t.co/JfFOWwZGrX

You can start seeing the Trumpist media's response to the insurrectionist mob sacking the U.S. Capitol to disrupt the peaceful transition of power coming together -- in its full force it will look like this.

2. It's shameful for Democrats, the media, and RINOs to blame any of this on the president or his congressional and media allies.

4. Some winking "how do we know they were Trump supporters, maybe it was antifa" stuff. 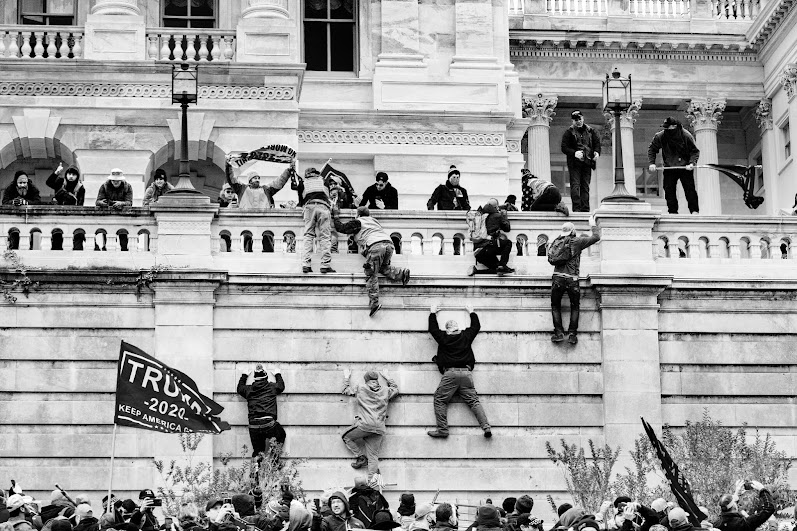