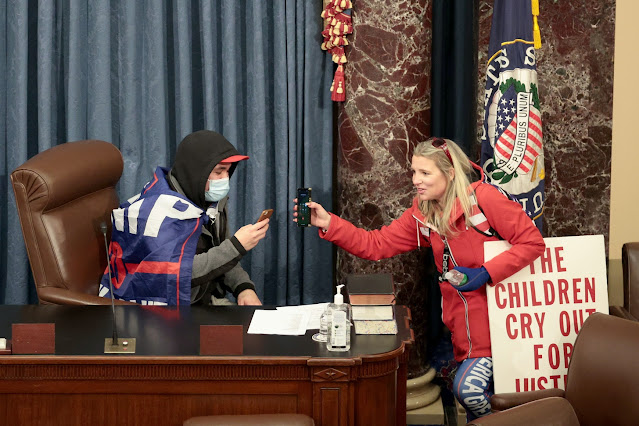 Jonathan V. Last, The Bulwark: "I can't stop thinking about the woman in this picture."

At the time, I was struck by the sign she was holding, which suggested that she was a QAnon follower . . . she was also wearing "Make America Great Again" tights.

I wondered what her story was. . . . She looked like an elementary school teacher. And it turns out that this was pretty close to the mark. Her name is Christine Priola. She lives in Cleveland. And up until last week, she was an occupational therapist who worked for the Cleveland school system.

She quit her job the day after the Capitol attack. Her resignation letter stated, in part: "I will be switching paths to expose the global evil of human trafficking and pedophilia, including in our government and children's services agencies."

Last understands and freely admits he's working with only the barest sketch of her life:

But the broad outlines are of a middle-aged, professional woman who had dedicated her career to helping kids. Who had a steady job. Probably with a pension.

And suddenly she's storming the Capitol with a bunch of clearly insane people.

Twenty-four hours later she quits her job. Says she wants to dedicate her life to fighting a global pedophile ring that involves the U.S. government. Then she's arrested and is now facing up to 2 years in jail. How does this happen? . . .

What we can see is a sudden and cultish devotion to conspiracy theories and a single political figure that is so far out of the mainstream that there's no analogue in recent American politics. . . .

I don't know about you, but what happened to Christine Priola scares the hell out of me. Because it suggests that a big chunk of mainstream American politics has moved into the realm of extremist cults. And the object of this new cult devotion isn't national pride or some random, charismatic figure. It's the president of the United States and his political party.

Something is happening at a very deep level. Donald Trump, QAnon, the Republican party, and much of American Christianity—both Protestant and Catholic—have congealed into an incoherent belief system. Something that's not quite politics, not quite religion, and not quite ideology, but rather a hybrid of the most dangerous aspects of all three.

This new belief system is unfalsifiable. It is powerful. It is virulent. It convinces normal people to take drastic actions that ruin their lives.

And because this system has the support—sometimes outright, sometimes tacit—of the Republican party, it is still in its expansion phase. . . .

I don't have the answers here. I don't know how to save someone like Christine Priola. But I'm pretty sure that if we don't figure out some answers, then January 6 will have been prologue to a dark future.

Note: There is nothing odd in Priola's statement to dedicate herself "to expose the global evil of human trafficking and pedophilia, including in our government and children's services agencies". What she wants to fight certainly exists and it's is an admirable pursuit. But pursuing the QAnon version of "human trafficking and pedophilia" (a bizarre fairytale in which Trump is a messiah sent by God who was put into office to battle a worldwide cabal of Satan-worshiping pedophiles who currently rule the world, including of course the unholy trinity of politicians, the media, and Hollywood, and there will soon by a world-changing event known as the "Storm" during which thousands of members of the cabal will be arrested and put on trial or put to death) is not the way to do it.

An investigation has begun into whether members of Congress provided pro-Trump insurrectionists access to the Capitol before the terrorist attack on January 6.

Russel L. Honoré, a retired Army lieutenant general, was named to lead "an immediate review of the Capitol's security infrastructure, interagency processes and procedures, and command and control".

Nancy Pelosi: "If in fact it is found that members of Congress were accomplices to this insurrection — if they aided and abetted the crimes — there may have to be action taken beyond the Congress in terms of prosecution for that."

No person has been executed for treason by the federal government under the Constitution. The small handful of people who have been convicted of the offense at the federal level — such as two militants from the Whiskey Rebellion and several people after World War II — have mostly been pardoned or released. So we are sometimes told that treason has been "rare" in the United States.

Hardly. During the American Revolution, the rebelling Americans were all committing treason against Britain. Similarly, the thousands of Americans who actively aided the British committed treason against the United States. In the Civil War, the hundreds of thousands of men who fought for the Confederacy all levied war against the United States, as did the people who aided and abetted the rebellion.

Neither the American Revolution nor the Civil War led to mass executions. At the end of the day, the spirit of reconciliation prevailed, and the victors allowed the vanquished to return home peacefully.

These statements are completely false and have no basis in fact. Industry experts and public officials alike have confirmed that Dominion conducted itself appropriately and that there is simply no evidence to support these claims. It was wrong for us to publish these false statements. We apologize to Dominion for all of the harm this caused them and their employees. . .  We regret this grave error.

The statement was likely prompted by a legal threat from Dominion, which has also sent warnings to Fox News, Newsmax, and OAN. Newsmax and Fox practically tripped over themselves in a mad rush to debunk their own false claims about the companies. Dominion has filed a $1.3-billion lawsuit against Sidney Powell, one of the more unhinged members of Trump's legal "Elite Strike Force". A second voting software company, Smartmatic, is also threatening legal action.

The Republican party may have given up on blaming "antifa" for the attack on the Capitol (Congressman Kevin McCarthy said, on the House floor, "there is absolutely no evidence of that"), but Russian state television is still pushing that particular lie on behalf of Donald Trump, who has been behaving like a Russian agent for a while. According to Russian reports, any pro-Trump supporters at the Capitol were merely "peaceful demonstrators".

The 10 Republicans who voted to impeach Trump have received numerous death threats. The Daily Beast reports: "Serious threats materialized almost instantaneously after Wednesday's vote, according to some of the GOP lawmakers. [Peter] Meijer [of Michigan] told NBC News on Thursday that the threats flooded in immediately, and that his GOP colleagues have requested armed escorts . . ."

Rep. Jason Crow (D-CO) spoke to several GOP colleagues the night before the vote. "The majority of them are paralyzed with fear. . . . [A] couple of them broke down in tears—saying that they are afraid for their lives if they vote for this impeachment".

And many Americans believe there are extremists "on both sides" -- progressive Dems are now considered extremists. :(

It's no joke. Believing every human being should have a home, enough to eat, proper healthcare, and not be discriminated against is now considered an extreme position. (And in a supposedly "Christian" nation.)