ProPublica Posts 500+ Videos Uploaded To Parler During The Capitol Attack:
"Evidence Not Only Of Trump's Culpability But Also The Metastasizing Cancers Of Disinformation, White Supremacy, And Warped/Radicalized Christian Fundamentalism . . . And Mental Illness And Protracted Adolescence In The White American Male" 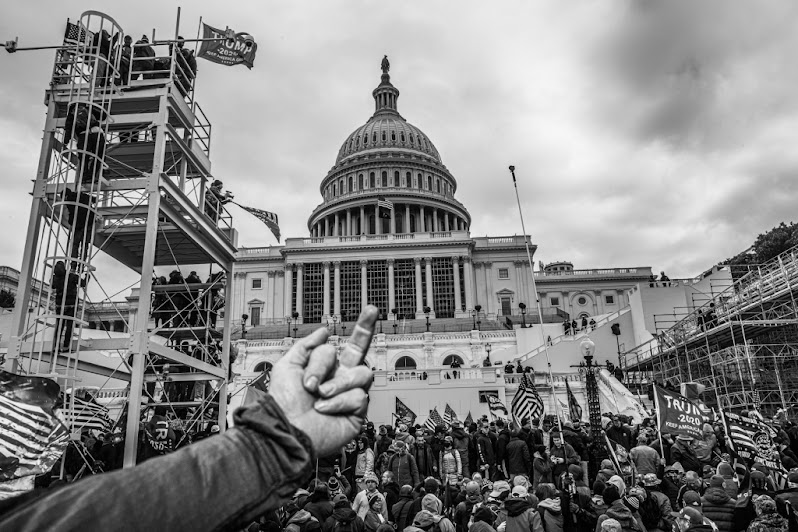 This story contains videos that viewers may find disturbing.

As supporters of President Donald Trump took part in a violent riot at the Capitol, users of the social media service Parler posted videos of themselves and others joining the fray. ProPublica reviewed thousands of videos uploaded publicly to the service that were archived by a programmer before Parler was taken offline by its web host. Below is a collection of more than 500 videos that ProPublica determined were taken during the events of Jan. 6 and were relevant and newsworthy. Taken together, they provide one of the most comprehensive records of a dark event in American history through the eyes of those who took part. Read more: Why We Published Hundreds of Videos Taken by Parler Users of the Capitol Riots | Inside the Capitol Riot: What the Parler Videos Reveal

Videos are ordered by the time they were taken. Scroll down to start watching or click on the timeline to jump to any point in the day.

This is an extraordinary collection of videos. It doubles as a body of evidence. The vids come from around the District, near the Capitol and inside the Capitol. It's like watching a mob, hypnotized for weeks, finally acting out the implanted directive.

A Reporter's Footage From Inside The Capitol Siege
The New Yorker, January 17, 2021

Luke Mogelson followed Trump supporters as they forced their way into the Senate chamber.

When Luke Mogelson attended President Donald Trump's speech on the National Mall, in Washington, D.C., on January 6th, he was prepared for the possibility that violence might erupt that day. Mogelson, a veteran war correspondent and a contributing writer at The New Yorker, had spent the previous ten months reporting on the radical fringe of Trump supporters, from anti-lockdown militias to fascist groups such as the Proud Boys. After Election Day, he interviewed Trump supporters who showed up at ballot-tabulation sites, and who believed the President's lies that the results had been "rigged" and his victory "stolen." At one post-election pro-Trump rally in D.C., Mogelson witnessed racist violence against Black residents of the nation's capital. At another event, he watched the host of the white-supremacist Web program "America First" declare, "Our Founding Fathers would get in the streets, and they would take this country back by force if necessary. And that is what we must be prepared to do."

After Trump's incendiary speech, Mogelson followed the President's supporters as they forced their way into the U.S. Capitol, using his phone's camera as a reporter's notebook. What follows is a video that includes some of that raw footage. Mogelson harnessed this material while writing his panoramic, definitive report, "Among the Insurrectionists," which the magazine posted online on Friday. (It appears in print in the January 25th issue.) His prose vividly captures how the raging anger and violence of the initial breach of the Capitol was followed by an eerily quiet and surreal interlude inside the Senate chamber, where Mogelson watched people rummaging through desks and posing for photographs. Although the footage was not originally intended for publication, it documents a historic event and serves as a visceral complement to Mogelson's probing, illuminating report.

The entire Senate should be made to watch this video [The New Yorker footage] during Trump's second trial. It is evidence not only of Trump's culpability but also the metastasizing cancers of disinformation, white supremacy, and warped/radicalized Christian fundamentalism.

Yes, and mental illness and protracted adolescence in the white American male.

At 2:12 p.m. on Jan. 6, supporters of President Trump began climbing through a window they had smashed on the northwest side of the U.S. Capitol. "Go! Go! Go!" someone shouted as the rioters, some in military gear, streamed in.

It was the start of the most serious attack on the Capitol since the War of 1812. The mob coursed through the building, enraged that Congress was preparing to make Trump's electoral defeat official. "Drag them out! … Hang them out!" rioters yelled at one point, as they gathered near the House chamber.

Officials in the House and Senate secured the doors of their respective chambers, but lawmakers were soon forced to retreat to undisclosed locations. Five people died, including a Capitol police officer. In all, more than 50 officers were injured.

To reconstruct the pandemonium inside the Capitol for the video above, The Washington Post examined text messages, photos and hundreds of videos, some of which were exclusively obtained. By synchronizing the footage and locating some of the camera angles within a digital 3-D model of the building, The Post was able to map the rioters' movements and assess how close they came to lawmakers — in some cases feet apart or separated only by a handful of vastly outnumbered police officers.

Even at this late hour, Trump is delusional about his election loss, or he is still in deep denial, or some combination thereof. He is "still, and I think it’s important to say, according to people I've spoke to, still telling people that he won," Maggie Haberman reported on "Reliable Sources" Sunday morning. "You know, he's still maintaining this. So, the idea that he has accepted the loss, he is not there yet, if he is ever going to get there." . . .

Trump's inability to face the truth of his loss to Biden might explain why he has barely faced reporters at all in the closing weeks of his presidency. Even more remarkably, he rarely ever called into his favorite TV shows. Aside from a couple of chats with Maria Bartiromo and Brian Kilmeade and some WH-produced videos, he's been invisible. . . .

We've been warning for a week that pro-Trump outlets are spending a lot less time reckoning with what happened on 1/6, and here's evidence: This weekend the word "riot" was uttered 11 times on Newsmax, 34 times on Fox News, 80 times on MSNBC and 81 times on CNN. (This data is through 7pm ET on Sunday.) Get it? . . .

The pro-Trump media's fraud has worked. A batch of new polls prove this. Polling from CNN, NBC and other outfits indicate that most Republicans do not trust the results of the 2020 election. They do not believe Biden won fair and square. This is not a fringe view -- it is the "mainstream" view within the GOP. Astead Herndon captured this in a story for the NYT over the weekend. . . .

Axios is releasing a new podcast series, "How It Happened," about Trump's last stand, as a companion to these astonishing "off the rails" stories . . .

With gratitude to Mark Knoller for the data, we made this bar chart of Trump's national TV interviews as president. Does it remind you of a hand with one finger raised in the air? That's Fox News in the middle, with more interviews than all the other networks combined. Trump never granted an interview to CNN during his four years in office, which is a first in the history of the network... 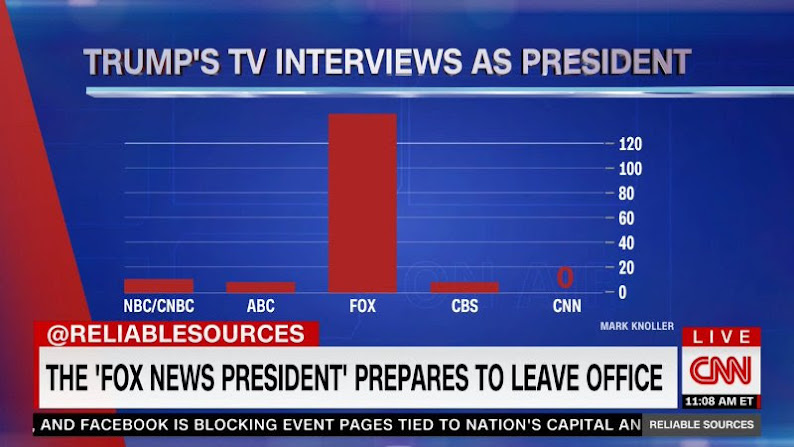