The US Is "In The Most Dangerous Public Health Period Since 1918"
There Will Be No Help, As Trump Condemns Thousands More To Death 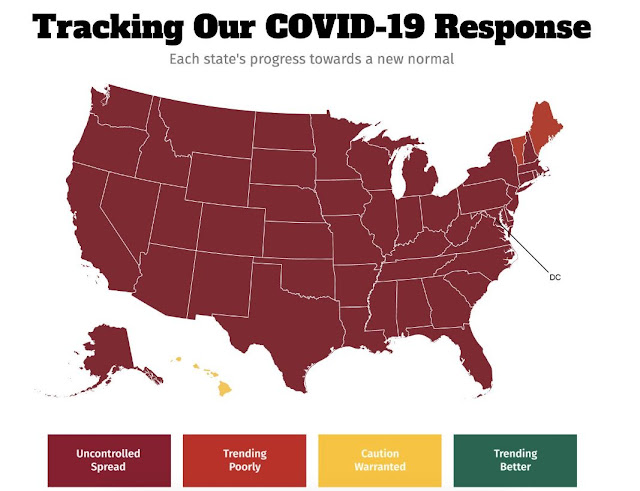 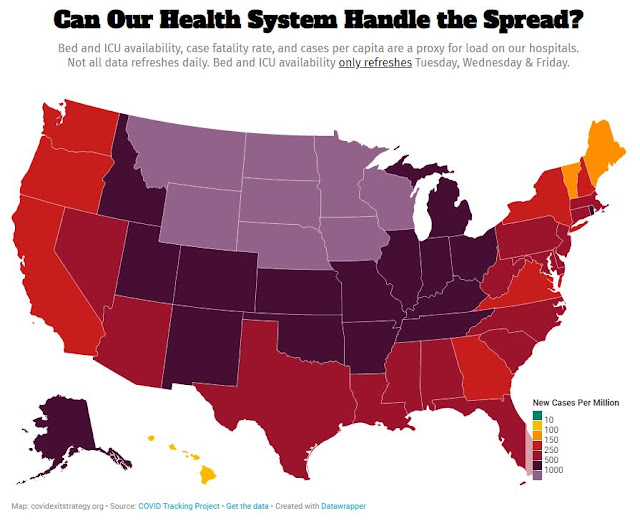 Michael Osterholm, director of the Center for Infectious Disease Research and Policy + a member of Biden's COVID advisory team, was on Meet The Press yesterday.

"We are in the most dangerous public health period since 1918."

Winter COVID Surge Is Upon Us — Trump And The Republicans Are Just Ignoring It
Chasing electoral delusions and holding his entire party hostage, Trump is condemning thousands more to death
Heather Digby Parton, Salon, November 16, 2020

Last summer, Gov. Kristi Noem of South Dakota welcomed bikers from across the country to the annual rally in the town of Sturgis. Hundreds of thousands showed up and they partied like there was no tomorrow. Noem, a rising Republican star, didn't cancel the state fair and refused to issue much guidance on how to avoid spreading COVID-19. As the state's caseload rose quickly throughout the fall, Noem spent $5 million of federal COVID relief money creating ads to encourage tourism.
She has rejected all advice from the CDC and has made it clear that she will defy any mandates coming from the new administration as well. She says she leaves it up to her people to do what's best for their families because she values freedom. Apparently, she believes these people should have the freedom to infect innocent bystanders as well.
Tomorrow has arrived. The state is now considered to be one of the worst COVID hotspots in the world and hospitals are in a desperate situation. Over the weekend a South Dakota nurse wrote this disturbing dispatch on Twitter:

I have a night off from the hospital. As I'm on my couch with my dog I can't help but think of the Covid patients the last few days. The ones that stick out are those who still don't believe the virus is real. The ones who scream at you for a magic medicine and that Joe Biden is going to ruin the USA. All while gasping for breath on 100% Vapotherm. They tell you there must be another reason they are sick. They call you names and ask why you have to wear all that "stuff" because they don't have COViD because it's not real. Yes. This really happens.

I'm sure it does. . . .
What [Noem has] done to her state, Trump and the Republican Party are doing to the entire country. The winter surge that all the scientists predicted is upon us and it's very bad. The president and his administration are obsessively trying to convince their voters that the election was stolen from them (which is a lie) so they aren't even pretending to be interested in the rapidly spreading pandemic. Republican officials are missing in action on everything, with senators even refusing to appear on the Sunday morning shows in case they might be asked to explain why their president and their party are tilting at electoral windmills while refrigerator trucks are being commandeered in some states because the morgues are all full. . . .
The Washington Post reported that despite official protestations to the contrary, "many administration officials paint a portrait of chaos, with senior advisers enabling some of Trump's most questionable instincts on the pandemic." As an example they point to White House chief of staff Mark Meadows' apparent belief that "one of the main ways the virus is spread is through waiters touching the cups of different people at restaurants." (As I have pointed out earlier, Meadows is not the sharpest tool in the shed.)
And they're doing this as the White House itself may be the most famous hotspot in the world, having been the site of two super-spreader events that sickened numerous members of the staff, Republican officials, Trump family members and even the president himself. More than 130 Secret Service members are reportedly in quarantine due to Trump's reckless campaign travel.

And according to the Post, the health agencies have not been allowed to cooperate with the Biden transition team amid a worsening public health crisis. They no longer even ask for health expert advice before they plan events anymore.
Much of this is reportedly attributable to Jared Kushner, who was responsible for persuading Trump not to bother pretending to care about the virus anymore and who brought on the most pernicious "adviser" of all, Dr. Scott Atlas, a radiologist from the conservative Hoover Institute and a regular on Fox News. There is no one more responsible for spreading a crude "herd immunity" theory without understanding that it can only happen without a mass loss of life when combined with a vaccine and mitigation strategies over time.
Atlas is still at it. After Michigan Gov. Gretchen Whitmer announced some new restrictions to try to contain the rapid spread of the virus in her state on Sunday night, Atlas tweeted, "The only way this stops is if people rise up. You get what you accept. #FreedomMatters #StepUp" He was highly indignant when it was suggested that he should not incite violence in a state where armed militia members were recently arrested for plotting to kidnap and execute the governor over COVID restrictions.
Numbers are climbing exponentially. The U.S. has reported 11 million total COVID cases as of Sunday, and it was 10 million just a week ago. One in 400 people have tested positive since then. With the lax attitude found among roughly half the population, hospitalization and death rates are going to start climbing quickly as well. . . .
In North Dakota, officials are allowing COVID-positive health care workers to continue working. They have no choice. There is a shortage, and unlike in the spring when health care workers came from all over the country to help out in the Northeast, the whole country is affected this time and they can't be spared. In fact, while federal and state governments have been playing games and we've all been distracted by the Trump show, those front-line workers have been going to work every single day, month after month, dealing with this deadly disease. The burn-out rate is growing rapidly as well.
As [The Atlantic's Ed] Yong writes in this article: "The most precious resource the U.S. health-care system has in the struggle against COVID-19 isn't some miracle drug. It's the expertise of its health-care workers — and they are exhausted." There is no help on the way. The federal government is paralyzed because the president is even less competent than he was before he lost the election and most Republican governors have more or less washed their hands of the problem. Everyone else is struggling along on their own. We are in for a rough few months.

"I find this more embarrassing for the country then debilitating for my ability to get started" -- Biden on Trump's refusal to concede pic.twitter.com/i2yD08RaHP

What the hell is the matter with Scott Atlas?

“Their last dying words are, ‘This can’t be happening. It’s not real.’ And when they should be... Facetiming their families, they’re filled with anger and hatred.” pic.twitter.com/tgUgP6znAT

Biden: "The idea the president is still playing golf and not doing anything about it is beyond my comprehension. You'd at least think he'd wanna go off on a positive note." pic.twitter.com/FpWznubG6b

Trump is lying so much and so ridiculously and all of the post-election fact check items are just like “no, that never happened.” https://t.co/Koi3vH41RM

.@Acosta: "President Trump is pretending he still has a chance to still win the 2020 election, but that's not true. Just a short while ago in the Rose Garden the president took no questions and appeared to come out in front of the cameras to sooth his damaged ego." pic.twitter.com/UnqlSN0hMe

CNN's Jim Acosta: After January 20th, Trump 'Just Goes Back to Being Another Crackpot on the Internet' https://t.co/uDLONr3TaY