Pennsylvania Judge Rejects Lawsuit (Making Trump 0-For-34 in Court Re Vote Fraud): "One Might Expect . . . A Plaintiff Would Come Formidably Armed With Compelling Legal Arguments And Factual Proof Of Rampant Corruption . . . This Has Not Happened. Instead, This Court Has Been Presented With Strained Legal Arguments Without Merit And Speculative Accusations . . . Unsupported By Evidence. . . . Plaintiffs Seek To Remedy The Denial Of Their Votes By Invalidating The Votes Of Millions Of Others. . . . This Is Simply Not How The Constitution Works." 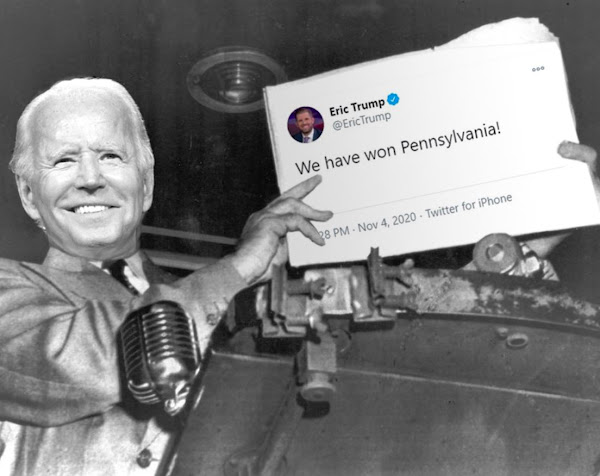 Prerecorded Jenna: One of our most promising cases is in Pennsylvania... pic.twitter.com/XTXxHJlV8Z

In this action, the Trump Campaign and the Individual Plaintiffs (collectively, the "Plaintiffs") seek to discard millions of votes legally cast by Pennsylvanians from all corners – from Greene County to Pike County, and everywhere in between. In other words, Plaintiffs ask this Court to disenfranchise almost seven million voters. This Court has been unable to find any case in which a plaintiff has sought such a drastic remedy in the contest of an election, in terms of the sheer volume of votes asked to be invalidated. One might expect that when seeking such a startling outcome, a plaintiff would come formidably armed with compelling legal arguments and factual proof of rampant corruption, such that this Court would have no option but to regrettably grant the proposed injunctive relief despite the impact it would have on such a large group of citizens.
That has not happened. Instead, this Court has been presented with strained legal arguments without merit and speculative accusations, unpled in the operative complaint and unsupported by evidence. . . .
[N]either in the FAC [First Amended Complaint] nor in its briefing does the Trump Campaign clearly assert what its alleged injury is. Instead, the Court was required to embark on an extensive project of examining almost every case cited to by Plaintiffs to piece together the theory of standing as to this Plaintiff . . .
The Trump Campaign first posits that "as a political committee for a federal candidate," it has "Article III standing to bring this action." On its face, this claim is incorrect. . . .
The Trump Campaign's second theory is that it has "'competitive standing' based upon disparate state action leading to the 'potential loss of an election.'" . . . First, the Court finds it important to emphasize that the term "competitive standing" has specific meaning in this context. Second, the Trump Campaign's reliance on the theory of competitive standing . . . is, at best, misguided. . . .
Examination of the other case law cited to by Plaintiffs contradicts their theory that competitive standing is applicable here for the same reason. . . .
It is telling that the only case from the Third Circuit cited to by Plaintiffs, Marks v. Stinson, does not contain a discussion of competitive standing or any other theory of standing applicable in federal court. Simply pointing to another case where a competitor in an election was found to have standing does not establish competitive standing in this matter. . . .
The Trump Campaign has not offered another theory of standing, and therefore, cannot meet its burden of establishing Article III jurisdiction. . . .
Defendant Counties, by implementing a notice-and-cure procedure, have in fact lifted a burden on the right to vote, even if only for those who live in those counties. Expanding the right to vote for some residents of a state does not burden the rights of others. And Plaintiffs' claim cannot stand to the extent that it complains that "the state is not imposing a restriction on someone else's right to vote." Accordingly, Defendant Counties' use of the notice-and-cure procedure (as well as Secretary Boockvar's authorization of this procedure) will be upheld . . .
All Plaintiffs have alleged is that Secretary Boockvar allowed counties to choose whether or not they wished to use the notice-and-cure procedure. No county was forced to adopt notice-and-cure; each county made a choice to do so, or not. Because it is not irrational or arbitrary for a state to allow counties to expand the right to vote if they so choose, Individual Plaintiffs fail to state an equal-protection claim.
Moreover, even if they could state a valid claim, the Court could not grant Plaintiffs the relief they seek. Crucially, Plaintiffs fail to understand the relationship between right and remedy. . . . Even assuming that they can establish that their right to vote has been denied, which they cannot, Plaintiffs seek to remedy the denial of their votes by invalidating the votes of millions of others. Rather than requesting that their votes be counted, they seek to discredit scores of other votes, but only for one race. This is simply not how the Constitution works.
When remedying an equal-protection violation, a court may either "level up" or "level down." This means that a court may either extend a benefit to one that has been wrongfully denied it, thus leveling up and bringing that person on par with others who already enjoy the right, or a court may level down by withdrawing the benefit from those who currently possess it. Generally, "the preferred rule in a typical case is to extend favorable treatment" and to level up. In fact, leveling down is impermissible where the withdrawal of a benefit would necessarily violate the Constitution. Such would be the case if a court were to remedy discrimination by striking down a benefit that is constitutionally guaranteed.
Here, leveling up to address the alleged cancellation of Plaintiffs' votes would be easy; the simple answer is that their votes would be counted. But Plaintiffs do not ask to level up. Rather, they seek to level down, and in doing so, they ask the Court to violate the rights of over 6.8 million Americans. It is not in the power of this Court to violate the Constitution. . . . Granting Plaintiffs' requested relief would necessarily require invalidating the ballots of every person who voted in Pennsylvania. Because this Court has no authority to take away the right to vote of even a single person, let alone millions of citizens, it cannot grant Plaintiffs' requested relief.

Rudy Giuliani, who had requested a fee of $20,000 per day from the Trump campaign, argued the case last Tuesday. (Note: It's clear that if/when payday comes and Trump stiffs Giuliani, Rudy will have been fairly compensated for his "expertise".)
It was Rudy's first court argument in nearly three decades. Rudy was the last man standing because every major law firm, having decided that watching their long-term professional reputations flushed down the terlit was not the prudent course of action, quickly abandoned Team Trump. Fortunately, Rudy had no good reputation to ruin.
And guess what? He was a disaster, prompting Richard Hasen, a professor at the University of California, Irvine School of Law, to exclaim: "I've never seen worse lawyering in an election law case in my life."
Jeremy Stahl of Slate called it "distinctly terrible". Giuliani:

treated the entire affair as though it were a Fox News appearance, raising baseless conspiracy theories unrelated to the case, failing to understand or answer basic questions of law, and contradicting himself on whether or not the campaign was actually alleging any "fraud".

Stahl recaps "some of the most dumbfounding lowlights":

Giuliani spent most of his time on a claim that was deleted from the lawsuit. . . .
During Giuliani's argument, the Pennsylvania state Supreme Court ruled unanimously against his poll observer claim. . . .
Giuliani alleged fraud, then said that the campaign was not actually alleging fraud. . . .
His argument was full of conspiracy theories and peculiar non-sequiturs. . . .
He couldn't answer why the remedy was to invalidate all the votes. . . .
He struggled with basic legal terms and even the English language. . . .
At one point, opposing counsel openly mocked Giuliani's comprehension of a key precedent, saying "I don't think Mr. Giuliani has even read Judge Rogers' argument or understood it." Giuliani responded that he had read the opinion and understood it—but he got the judge in question wrong. "My goodness, Judge, I was accused of not reading your opinion, and if I did, not understanding it," he said. "I have read your opinion and I do understand it. It was completely distinguishable from this case." The opinion was written by a separate judge.
Finally, Giuliani seemed to struggle with the English language itself. When describing poll observers having been prevented from adequately observing the polls, he stated, "They were denied the opportunity to have observation and ensure opacity." The judge sought to clarify that opacity means a lack of transparency, rather than transparency.

"And you want to be my latex salesman?"

Trump and his allies are now 2-34 in post election litigation.https://t.co/tA5ZIymzPz

iirc, the two "wins" only affirmed stuff that had already been decided BEFORE the election (e.g. requiring that ballots arriving late be separated out) & the number of votes which they cover isn't enough to reverse the results

You media morons are all laughing at @RudyGiuliani, but he appears to have already established a great rapport with the judge, who is currently offering recommendations on martini bars for Team Trump in open court.

The short explanation of the reasons the judge tossed President Trump's Pennsylvania lawsuit is: All of them.

The plaintiffs lacked standing. They lacked evidence. They wanted an unconstitutional remedy. Their legal arguments were "strained" and "without merit." pic.twitter.com/pheinEDl1H

BREAKING: Judge in Pennsylvania tosses Trump campaign lawsuit, says they have presented no compelling evidence of fraud or mismanagement. pic.twitter.com/kKUdstPImx

Trump's lawyers *really* made a mess of this. The judge said one claim, "like Frankenstein's Monster, has been haphazardly stitched together from two distinct theories in an attempt to avoid controlling precedent."

This is ... the Kraken? I dunno. pic.twitter.com/UPjBFF1j2p

But but but I thought they were “an elite strike force”?

“I am not a lawyer but I was once bad at sports. This judge’s opinion is the functional equivalent of Rudy getting dunked on here” pic.twitter.com/hoDfm2ihqq

Trump is probably going to need someone to explain to him that “with prejudice” is actually bad for him.

BREAKING: A bar Complaint has been filed against Rudy Giuliani and several other attorneys representing the Trump campaign, asking that their law licenses be revoked for having “participated in frivolous [election] lawsuits”

Hey Jenna, just circling back, where are we on this? https://t.co/GDeFBkb3zO

Difficult to believe with representation like this that the president has lost so many cases in court https://t.co/LZaRH6gIIg

Jenna Ellis is the lawyer you call if you want to get the electric chair for a speeding ticket.

Being Embarrassed By Multiple Judges And Going 0-For-34
In Vote Fraud Challenges (And Having Black Goop Run Down
Both Sides Of His Face While Ranting Dementedly
On National TV) Is All Part of Rudy's Seven-Dimensional-
(And-Four-Seasons-)Chess Master Plan!

Trump campaign statement on Pennsylvania ruling: "Today’s decision turns out to help us in our strategy to get expeditiously to the U.S. Supreme Court." pic.twitter.com/q1CHw8Xhrx

So please tell us what consulting you did that was legitimately worth $747,622 to the family company you already worked for. If this is "harassment, pure and simple," that should be pretty easy to explain. https://t.co/QMuEQiqn22

This kid hit 2 more balls than Lindsey Graham even has in his possession. 🤔