Trump Shares Article That Mentions His Sister Publicly Supporting Him.
(Trump Was Fooled By #FakeNews & A Bogus Twitter Account.) 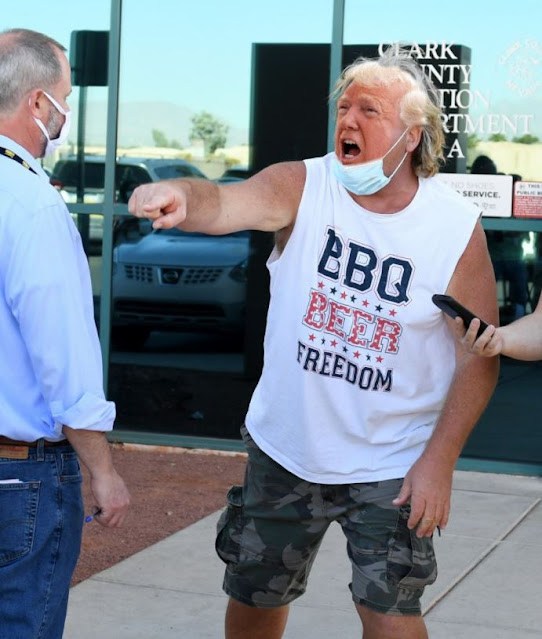 Donald Trump forced himself to come out of his bunker on Friday to lie in public rather than only on Twitter. Trump was either furious at "Oozy Giuliani"'s epic shitshow yesterday or jealous of the media attention given to the man who led the successful press conference (a success because it did not take place in a parking lot next to a dildo shop).
On Friday, Trump spoke about his latest obsession, of course, "which I won, by the way". This lie seemed more for his own benefit, though, a little note-to-self that he is NOT a loser. In addition, one of Trump's recent pleas for money (his campaign is still sending out upwards of two dozen desperate emails every day) included this statement: "One thing has become clear these last few days, I am the American People's ALL-TIME favorite President." (Also: Trump has not taken questions from reporters since Election Day.)

"I've been loyal to the special interests" pic.twitter.com/5nz3dpHnCg

"The campaign, which I won by the way" -- Trump pic.twitter.com/MzDj49YZJG

Honoring the outcome of the democratic process is a blow to our president. Surreal times. https://t.co/trWlE5pdKv

Trump suggests that news of a coronavirus vaccine receiving approval after the election was part of a conspiracy to bring him down pic.twitter.com/ngCDEpPq9P

These guys are really just pretending that Trump won the election and everything is normal. Surreal. pic.twitter.com/dZ3pDIbrwf

This is the *third time in a week* CNN has debunked a Trump campaign claim about a dead person voting in Georgia.

It is not especially normal for a president’s team to go around falsely accusing private citizens of crimes. https://t.co/kXbqHb8mST pic.twitter.com/Yr2oHKnda6

There was no purpose to Alex Azar and Seema Verma's comments other than to remind Trump how big, powerful, and awesome he is. Big Führerbunker vibes.

Just a reminder that @SeemaCMS spent millions of taxpayer dollars to promote her career https://t.co/gQNf0GxqaW

How Stupid Are Pro-Sedition Republicans?
They Don't Know The Difference Between Michigan And Minnesota!

They thought "MI" = Minnesota (it's MN), and then compared a bunch of results in Minnesota to Michigan population statistics. https://t.co/nu9FMgSuqY

Georgia's Republican secretary of state said Tuesday that President Trump's attacks on the integrity of mail-in voting contributed to his loss in the Peach State.

"Twenty-four thousand people did not vote in the fall; either they did not vote absentee because they were told by the president 'don't vote absentee, it's not secure,'" Secretary of State Brad Raffensperger (R) said in an interview with WSB-TV, an Atlanta-area ABC affiliate. "But then they did not come out and vote in person. He would have won by 10,000 votes. He actually . . . suppressed his own voting base." . . .

Jr. claims Coronavirus death numbers are down to “almost nothing” pic.twitter.com/NGMDLYkdsD

So Donald Trump Jr. has tested positive for coronavirus, at least now we know that cocaine doesn't make you immune from the virus.

Donald Trump has posted several election propaganda tweets in a row. He still hasn't addressed the fact that his son Donald Trump Jr. has coronavirus, or wished him well.

Giuliani's son tested positive this morning and was at yesterday's news conference. https://t.co/rXs44eyECG

And yesterday Rudy rubbed his own snot and greasy sweat sludge all over his face and hands before taking the podium with 7-8 people within 3 feet of him.

Florida senator Rick Scott is the latest member of Congress to test positive for COVID-19 this week. https://t.co/zi3L7XsFD1

The MI GOP leaders told Trump they desperately need coronavirus relief money and that they’re not going to mess with the election result.

Seems like the pretty blunt implication here that the president’s focus on the latter issue is distracting from the former. pic.twitter.com/1gGA1o8Sl5

Daily COVID-19 deaths have been over 1,800 for 3 days in a row. pic.twitter.com/pPuriIE6Vs

Looking at current reporting as of 8:15 pm ET, there are over 200,000 newly confirmed cases. pic.twitter.com/RSMYMIlixl

Based on estimates by @trvrb and the daily new case count, around 3000 daily deaths can be expected in around 22 days. (CFR ~1.7%). As hospitals become overloaded and HCWs contract COVID, CFR could rise.
You’d think the states/cities would be doing more.

But Not This One

Sometimes the headlines of the Trump era are just plain sad:

"No, President Trump's sister did not publicly back him. He was duped by a fake Twitter account."https://t.co/oYKQ70Z64Z

Trump thanked his sister for tweeting her support for him. But the account appears to have been a parodyhttps://t.co/b1uOOe6Kya

2/... the results and the clear will of voters, based on lies and conspiracy theories, all while a deadly pandemic daily kills hundreds if not thousands of Americans, and @senatemajldr and @GOPLeader are quiet and seem perfectly fine with it.

It’s tough for me to imagine that.

It was Dr. Evil at Four Seasons Landscaping with Hunter Biden's laptop. https://t.co/kzAgQeMRSF