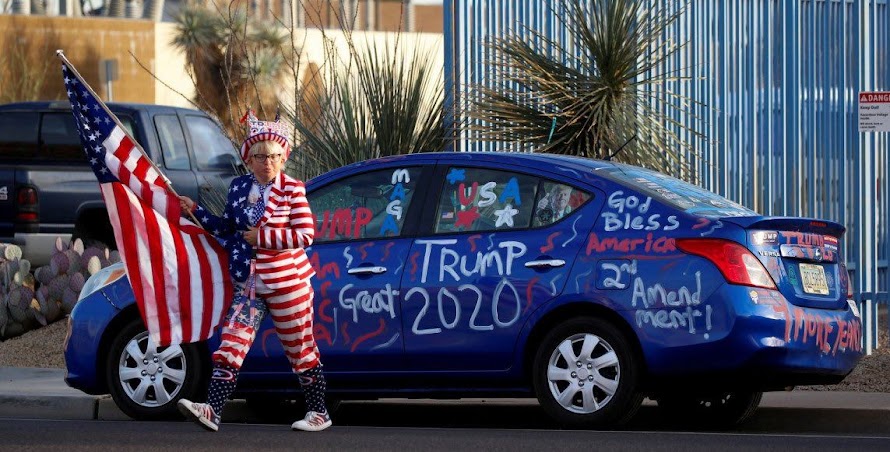 She won't wear a mask, because it makes her look ridiculous.
The New Mount Rushmore of Trumpisms: "Alternative Facts", "A Non-Zero Number", "Four Seasons Total Landscaping", and "Election Epidemic".

They have the best chants:

MOMENTS AGO: Trump supporters rush to see the president's motorcade driving by. pic.twitter.com/h0brs4gfC0

Trump could’ve delivered a rousing speech to his followers at the Million MAGA March but instead he opted to drive through them so he could play golf. pic.twitter.com/HHH8wQVsyf

The actual number of people is around 5,000 and that includes counter protestors. How do we really know @kayleighmcenany is lying about the crowd size at the #MarchForTrump? Because @realDonaldTrump decided to play golf rather than speak to the small base that showed up. https://t.co/NVTnwSnUgn 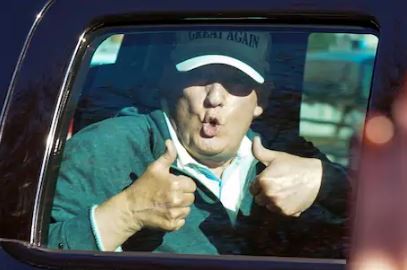 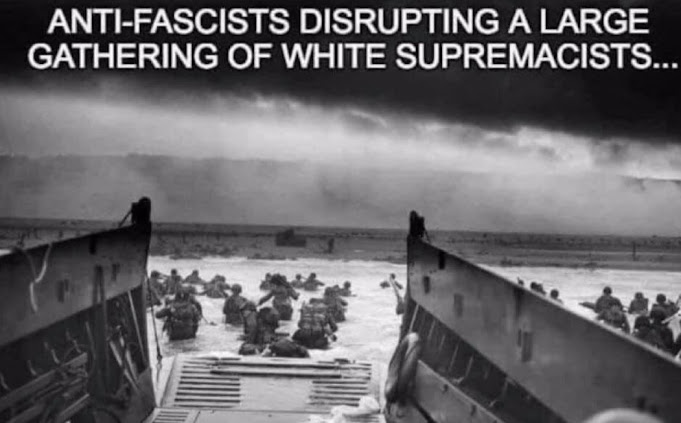 They Have Also Been Called "Gravy Seals"!

Have you seen just how diverse the #MarchForTrump is?

Administration ending like it began: lying about crowd numbers https://t.co/uOARFyyLTe

Reminiscent of the ‘million’ that were going to show up to the Tulsa rally. pic.twitter.com/XtxtKgSlF4

... who wants to tell him? pic.twitter.com/vprzYW5U9a

"We are the storm" pic.twitter.com/NkQWVce8CC

These people are deranged pic.twitter.com/riCW6U5T7K

Trump followers chanted "Alex Jones!" as they marched to the Supreme Court pic.twitter.com/SyqbV5DLBR

A Confederate flag is being waved around during the Million MAGA March pic.twitter.com/YqWsihDvZM

Fox News hosts are amplifying the myth that Trump still has a chance to legitimately win the election. He doesn't. It's over. pic.twitter.com/But2HawW9p

2 died of Ebola: They said Obama should resign.

4 died in Benghazi: They had Hillary testify for 11 hours, held 33 hearings, and launched a multiyear probe.

248,585 died thanks to Trump’s malevolence: and they threw him a parade

A protest is an objection to a grievance. If it's just a bunch of sore losers, it's called a tantrum. #MAGA

One helluva lede:
In his first interview as a senator-elect, Tommy Tuberville misidentified the 3 branches of government, claimed erroneously that WW2 was a battle against socialism and wrongly asserted that Al Gore was president-elect for 30 days.https://t.co/Gryo679qK3

The fucking level of stupidity on this one is just insurmountable. I guess all you need these days to become an elected official is an 8th grade education and ability to exploit the children of the corn #killmenow #COVIDIOTS #maggot pic.twitter.com/ULJUTnhmo2

Donald Trump received more re-election votes than any incumbent president in American history and you’re telling me that the man whose rallies couldn’t fill a parking lot got more and “won?”

The president continues to exhibit a unique combination of lying and not making any sense. pic.twitter.com/dbJX6bhEHj

Factually this is absurd. But consider the assumptions/a sense of what’s not criminal. He’s explaining how you might get it close enough that the scotus could help steal the race. SCOTUS throws out the results of the election in PA. https://t.co/GrkJ8Fv3Ff

Minnesota GOP sent virus alert only to its side of the aisle https://t.co/w4tXjxAvxD

I continue to hold the controversial view that just shrugging our shoulders and saying “it is what it is” as thousands of our countrymen and women are killed by disease is bad.