When it comes to reporting on Donald Trump's torrent of lies about the election (or about anything else), the New York Times believes it is "impossible . . . to choose between telling the truth and sounding nonpartisan".

From The Morning, its daily newsletter, of November 5, 2020:

Trump's actions are still causing significant damage. They undermine his supporters' faith in the country's government. They also undermine the credibility of the United States around the world. And they force election officials, journalists and social-media platforms to choose between telling the truth and sounding nonpartisan; it is impossible to do both about Trump's election claims.*

THE TRUTH IS NOT PARTISAN!!! (Although as has been noted, it does have a liberal bias.)

So Trump's lies have forced the Times' reporters into this impossible choice. Otherwise, I guess, they wouldn't bother.

Do the Times' editors realize how it looks to actually admit that publicly?

Why are they worried about being called names by ignorant, fascist-worshipping dolts?

Do they understand they have wholly accepted and internalized Trump's reality-denying worldview?

(As one observer put it: "The Times is on the verge of an epiphany here but they're fighting mightily to avoid having it, it seems.")

Yesterday, the word "lie" appeared in several spots on the Times' main webpage. It may have been the first time that has happened since Trump was inaugurated. Four days ago, Times columnist Paul Krugman reported when he began writing for the paper in 2000, "my editors told me that it wasn't acceptable to use the word 'lie' when writing about presidential candidates".

The reason was that an outside observer could not truly ascertain if the speaker knew she was telling a lie. Perhaps she was simply misinformed. Of course, in Trump's case, we still don't know if he truly believes all the shit that comes out of his mouth. He probably does. But when he tells the same lie 20 or 50 or 200 or 407 times (and thus has had the opportunity to be told what's what by an aide) over a period of years, it doesn't matter. He's lying. 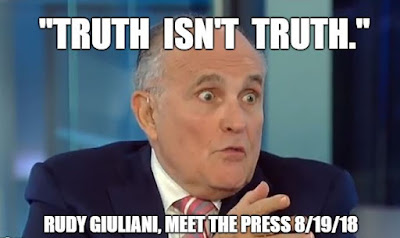 And yet the person who wrote that wacky paragraph (David Leonhardt) actually began his Times piece with this:

"This is a dark and dangerous moment for American democracy.

A sitting president has spent months telling lies about non-existent voter fraud. Now that his re-election bid is in deep trouble — but with the outcome still uncertain — he has unleashed a new torrent of falsehoods claiming that the other side cheated. He has demanded the Supreme Court intervene to decide the election in his favor.

His supporters are staging protests in Arizona, Michigan, Nevada and Pennsylvania meant to interfere with legitimate vote counting. In Phoenix, some have showed up at the State Capitol with guns (as you can see in this short video taken by my colleague Simon Romero)."