The New York Times' site allows you to see the results of each town. Looking at the overwhelmingly rejection of Trump in the towns around where I grew up makes me happy. (In most towns, 98+% of the votes have been counted.) 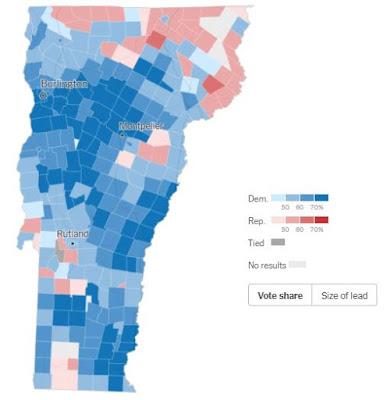 The Burlington area also had most of the state's widest margins of victory for Biden. 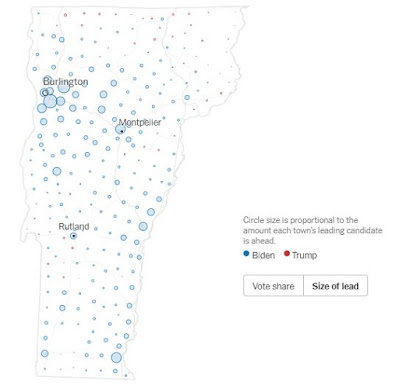 In New York City, Trump was trounced in four of the five boroughs:

Staten Island: Why the hell haven't you seceded yet?

Carey Georgas is a Democrat in Republican-dominated East Texas:

I was hoping that this would be a chance for some healing, if there would be somewhat of a repudiation of Trump. But I don't see where the healing is going to come from now. . . . It's nerve-wracking watching the stuff roll in. I'm trying not to make it existential in my mind, but it's just got me shaking my head, man. Have I just been duped about what America is and what America stands for? That's kind of where it's got me, scratching my head and wondering, 'Is this my country?'

The Washington Post reports Trump's lead in Pennsylvania is down to 4.0% and both the Post and New York Times have Trump with a tiny 1.0% lead in Georgia. Nevada stated it might be releasing some vote totals today, but have now reverted back to the original plan of updating the numbers at noon tomorrow.

The "blue shift" in Pennsylvania is going to launch 10 million conspiracy theories and it was 100% avoidable had legislators just copied Ohio's notes and let them process ballots early.

Biden squeaked out a win in Michigan thanks to extremely high turnout in Detroit, where Hillary Clinton had done poorly in 2016.

The 2020 turnout is looking like it will be the highest since 1900, when 73.7% of eligible Americans cast ballots (of course, that was white men only). The more modern record was set in 1960 (63.8%), though that still excluded a ton of Black people. Yay, land of the free!! The projection for this year is 66%. Also, the vote totals in 19 states set new records. . . . Still, one out of every three eligible voters did not cast a ballot.

Twitter has flagged six of Trump's tweets as "misleading" since last night. His tweets included unsupported claims of widespread election fraud and premature declarations of victory. Twitter has also attached warnings to tweets posted by Trump's official campaign account, Kayleigh McEnany, and Eric Trump. President Shit-For-Brains claimed in one tweet that Biden-heavy "surprise ballot dumps" had magically appeared in states where he was leading ("often solidly"), which is something he copied after seeing it on Fox News. (I'm surprised it's been only nine tweets.)

"We hereby claim the state of Michigan..."

"I'm not sure why most of Trump's support was up near the Quebec border."

I was surprised to see that in Maine's CD 2 (whose single EC vote goes to Trump), a number of the conservative, French-Canadian, Catholic milltowns in the St John Valley (bordering Canada) in Aroostook County went for Biden. Labor union influence maybe.

So did your other home state, New York.