Welcome To The Freedom Cafe! 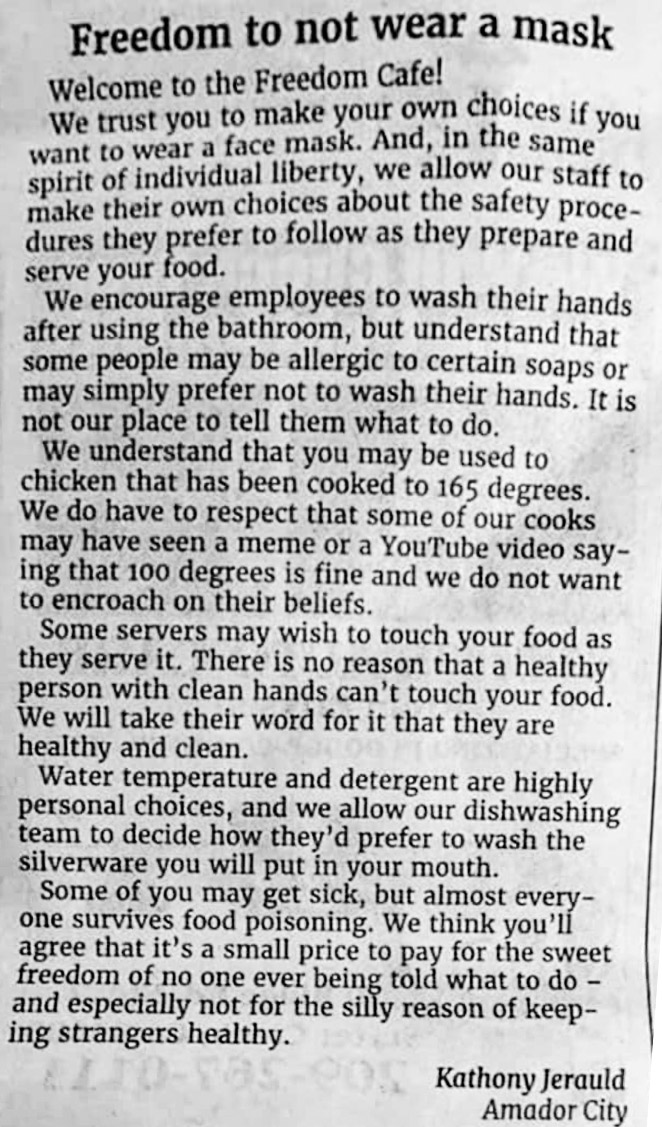 One of the first school districts in the U.S. to reopen its doors during the pandemic did not even make it a day before a call came from the county health department — a student who had walked the halls and sat in various classrooms had tested positive https://t.co/gTmeoCjZkW
— The New York Times (@nytimes) August 1, 2020

Some 260 cases of the coronavirus have been tied to attendees and staff at a North Georgia children’s camp in June, according to a report released Friday by the Centers for Disease Control and Prevention, one of the largest known superspreading events... https://t.co/C0v2ZWvdUn
— Atlanta News (@AtlNewsNow) July 31, 2020

Herman Cain's people have deleted this tweet of his after his death, but I think it appropriate to remember his scorn for even the most basic of protection against THE VIRUS THAT HE GOT WHILE ATTENDING TRUMP’S MASKLESS COVID BONANZA IN TULSA.#COVIDIOTS pic.twitter.com/DVQxunU3fq
— jfriesen83 (@jfriesen83) July 31, 2020

How weak that this is their version of being oppressed. THIS is the worst thing that’s ever happened to them. To be forced to care about others is their worst fear. Horrible human beings. Lack of empathy makes you an animal. THEY DONT CARE ABOUT ANY1 BUT THEMSELVES.
— Kristen (@MsAlasska86) July 31, 2020

"Mr. President, the GDP is down 32.9%; unemployment is at 11.1%; 157,000 Americans have died; Russia paid to have our soldiers killed; your approval is down; and you're getting crushed in the polls. What should we do?"

This was the scene in Berlin, where an estimated 17,000 people defied social-distancing and mask requirements to join a protest supported by neo-Nazi groups, conspiracy theorists and others who said they were fed up with the restrictions.

On average, coronavirus kills 930 people per day in the United States. A game of golf is 18 holes.

155 Americans will die by the time the president is done playing today. pic.twitter.com/SkaLKhZAME
— The Lincoln Project (@ProjectLincoln) August 1, 2020