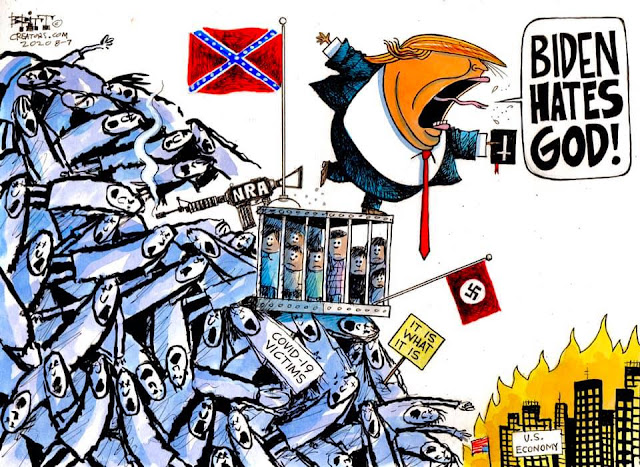 Donald Trump was in rare form on Thursday morning, when he called Maria Bartiromo's show on the Fox Business Network.

Nobody's blaming me for the fact that the -- call it whatever you want, the China virus, as you know there's 20 names for it. You have your pick of names, right?

Came out of China, should have never been allowed to happen, but the fact is this plague came in and I closed it up, saved millions of lives, now we're re-opening.

Trump tried to scare people about what would happen if Joe Biden is elected.


You have to rebuild cities because too much light gets through the window, so let's make the windows nice and small. Let's rip down the Empire State Building and replace it with no windows.

He doesn't know what he's doing. And now you have a -- sort of a mad woman, I call her, because she was so angry and so -- such hatred with Justice Kavanaugh. ... These are seriously ill people.


And I'll tell you a good poll because the real poll -- we're doing very well on the polls, and they love the suppression polls.

Trump explained exactly how he is committing election fraud.


They want $3.5 billion for something that will turn out to be fraudulent, that's election money basically. They want 3.5 trillion -- billion dollars for the mail-in votes, OK, universal mail-in ballots, 3.5 trillion. They want $25 billion, billion, for the post office. Now they need that money in order to have the post office work so it can take all of these millions and millions of ballots. ... But if they don't get those two items, that means you can't have universal mail-in voting because they're not equipped to have it. ... Now, if we don't make a deal, that means they don't get the money. That means they can't have universal mail-in voting, they just can't have it. So, you know, sort of a crazy thing. Very interesting. ... This will be the greatest fraud in history. ... This will be the greatest fraud in history. ... Yesterday, Virginia, 500,000 applications for ballots got sent to everybody, nobody even knows. Got sent to dogs, got sent to dead people, nobody has no idea what happened. They said, 'oh, we made a mistake, I'm sorry.'

The actual issue was an incorrect return address, not incorrect addresses for voters. Hard to believe, but Trump got it backwards.


So, Christopher Wray was put there, we have an election coming up, I wish he was more forthcoming. He certainly hasn't been.


I have a friend who is a very sophisticated man, one of the most successful people, you know him very well, he said, you have to be the most honest person in the world to escape the greatest witch hunt ever perpetrated in the history of our country.

CNN's Chris Cillizza: "This 'friend' feels a lot like the 'girlfriend' I had in seventh grade. She lived in Montana so you couldn't meet her but she was smart and funny and also beautiful. Believe me."
Posted by allan at 1:27 AM