Trump Agrees With QAnon: He's Saving The World From A Cult Of Pedophiles And Cannibals 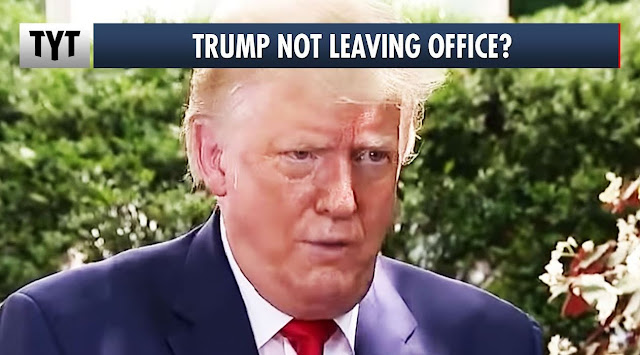 "The president has always said he'll see what happens and make a determination in the aftermath" -- Trump will not leave office willingly. They're not even trying to hide it at this point. pic.twitter.com/1ScFdzryBn
— Aaron Rupar (@atrupar) August 19, 2020

Using the word "aftermath" has strong implications. They fully expect the election to be a disaster. Normal events don't have "aftermath".
— Charles Mangin (@option8) August 19, 2020

If he wants to stay, he can be dragged out by an angry mob. I'd actually prefer that.
— Grayson Mendenhall (@GKMendenhall) August 19, 2020

Reporters need to stop framing that question as though Trump has any choice in the matter. More like, “If Mr. Trump loses the election, will he continue our tradition of peaceful transition, or will he need to be removed by force?”
— Gordon Matthew (@gordonsky) August 19, 2020


Perhaps A Reporter Could Find The Time To Bring That Up.
"Sir, How Would You Describe Something That Is 6,667 Times Worse Than A 'Bad Outbreak'?"


"New Zealand, by the way, had a bad outbreak." New Zealand had 6 new Covid cases today. The US had nearly 40,000. Imagine comparing those two situations. pic.twitter.com/JkbOMGzQQ6
— Aaron Rupar (@atrupar) August 19, 2020

Jacinda has more credibility than Trump , she addressed it quietly and made him look a fool pic.twitter.com/1I53ViqkOd
— purplefrappe (@purplefrappe) August 19, 2020

"They shut down things causing tremendous depression for those places are still shut down" -- Trump whines about colleges canceling in-person classes because of coronavirus outbreaks pic.twitter.com/FXARxLBqF7
— Aaron Rupar (@atrupar) August 19, 2020

Trump is asked to shed light on his thoughts about about the lunatic QAnon conspiracy theory. Instead of denouncing it, he says, "I understand they like me very much, which I appreciate."

"I've heard these are people who love our country," he adds, coming close to an endorsement pic.twitter.com/gcvHvuqzIa
— Aaron Rupar (@atrupar) August 19, 2020


But He Also Wishes Them Well


REPORTER: QAnon believes you are secretly saving the world from this cult of pedophiles and cannibals. Are you behind that?

TRUMP: Is that supposed to be a bad thing? We are actually. We are saving the world. pic.twitter.com/rPYFU1B8WB
— Aaron Rupar (@atrupar) August 19, 2020

Trump adds that QAnon believers are people who "love our country" and he's heard they don't like what's going on in Portland.
— Daniel Dale (@ddale8) August 19, 2020

Trump's endorsement of a far-right Muslim-hating conspiracy theorist should be a much bigger story. It's time to stop with euphemisms like "Trump is stoking the culture wars." This is reactionary anti-immigrant hate and extreme radicalization. New piece:https://t.co/ahPltY1ChB
— Greg Sargent (@ThePlumLineGS) August 19, 2020


Trump Is (Again) No Longer Against "Cancel Culture"


Before he started railing against "cancel culture," Trump tried for years to get numerous people and entities fired, boycotted or canceled for doing things he didn't like. My partial list here: https://t.co/wLe1qsajnQ pic.twitter.com/P0zZAQQdIW
— Daniel Dale (@ddale8) August 19, 2020

Asked about his call for a Goodyear boycott, Trump says, "you know what? [Workers who lose their jobs] will be able to get a good job." (The unemployment rate is currently over 10 percent.) pic.twitter.com/j6vJBplQup
— Aaron Rupar (@atrupar) August 19, 2020


Trump explains that China ending democracy in Hong Kong isn't something he's that worried about because it means more business for US stock exchanges pic.twitter.com/RxBmscEkJi
— Aaron Rupar (@atrupar) August 19, 2020


From The Man Who Believes Injecting Bleach Into Your Lungs Prevents the Flu,
Thinks Nuking Hurricanes Can Improve The Weather,
Windmills Cause Cancer,
The 1917 [sic] Influenza Epidemic Ended World War 2,
The Existence Of Snow Disproves Climate Change,
Who Tried To Register To Vote In Florida Using An Out-Of-State Address (And Got His Date Of Birth Wrong),
Was Called A "Fucking Moron" By His Secretary Of State,
An "Idiot" By Two Chiefs Of Staff, Three Advisers, And The Secretary Of Treasury, "Dumb As Shit" By An Economic Advisor,
"Untethered To Truth" By The Director Of The FBI,
"A Supreme Sexist" Who "Thinks He's God" By A Former Executive Vice-President Of The Trump Organization,
"Less A Person Than A Collection Of Terrible Traits" According To His Chief Economic Adviser,
"Like Trying To Figure Out What A Child Wants" According To His Deputy Chief Of Staff,
Someone With The Intelligence Of A "Kindergartner" According To His National Security Adviser, "Not Only Crazy [But] Stupid" By A Friend (!) And Supporter, And
"Unable To Separate Truth From Falsehood" According To Dozens Of Republican Foreign Policy Experts

Personally I have no problem with invisible planes... what I wanna know is where the hell do they find invisible pilots - and how?
— Ken Webster (@WebsterKW) August 19, 2020

Former Trump Official Miles Taylor revealed that Trump said he wanted to trade Puerto Rico for Greenland even though they are Americans because they were "dirty and poor."

He also confirmed it was obviously not a joke. pic.twitter.com/ySlvDAIK4R
— Amee Vanderpool (@girlsreallyrule) August 19, 2020


Did DeJoy pull a Trump & simply lie that he halted USPS changes?? Mail sorting equipment is STILL being dismantled & destroyed in Michigan.

"The Postmaster General frankly admitted that he had no intention of replacing the sorting machines, blue mailboxes and other key mail infrastructure."
— Sam Stein (@samstein) August 19, 2020

They didn’t just remove those sorting machines, they destroyed them. This was overt sabotage and it is a federal crime.
— Midlife Crisis Actor (@ScottHome1066) August 19, 2020


Some Very Fine People ... On Our Side


Laura Loomer says that she's a "proud Islamophobe," said that she doesn't "care" about the 2019 anti-Muslim mass shooting in Christchurch, and has stated that she's in favor of "more" migrant deaths.

"Loomer has called Muslims 'savages' and referred to herself as a '# ProudIslamophobe.' On multiple occasions, she has proclaimed that she does not care about what happened to Muslims in the Christchurch shootings, where more than 50 people were murdered.”https://t.co/s0lKBHaTMF https://t.co/7IueAEmDBl
— Brendan Karet 🚮 (@bad_takes) August 19, 2020